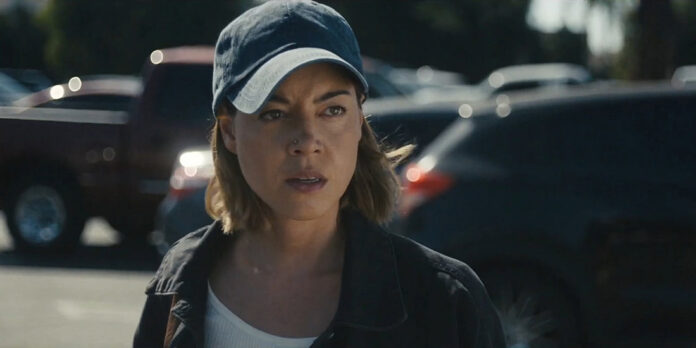 THE STORY – Saddled with student debt and unable to find work, a college graduate becomes involved in a credit card scam, acting as a dummy shopper and buying increasingly risky products with stolen credit cards.​

​​​​There are plenty of triggering words or phrases in the English language for millennials, but few have as damaging an effect as “student loans.” Just thinking about the outstanding amount I owe for the next however many years is enough to send me down a rabbit hole of financial despair. When you add interest into the mix and the fact that most payments go toward the interest amount rather than the loan you actually took out, it’s enough to make you scream.

Emily (Aubrey Plaza) has this same plight. Barely making ends meet through her catering job, along with a criminal record, there’s no way out of this madness. One phone call with her student loan agency — where the woman says not enough money was paid toward her monthly balance because it all went toward interest — says it all. It’s no wonder why Emily, in the aptly named “Emily the Criminal,” has to look to illegal options to help her situation. I really can’t say I blame her. If I was $70,000 in debt, I might also consider just about anything to get those payments cleared. By making this crime thriller the most relatable one in recent years, John Patton Ford, in his feature directorial debut, is able to make the stakes feel so real. At the same time, Plaza delivers one of her best performances to date.

One look at Emily, and you might wonder why she’s having such a tough time getting a better job. Right off the bat, we learn why. In a job interview, she’s immediately questioned about her criminal record, and when she lies about it, the prospective employer pulls out the receipts – a background check. She’s probably done this dance several times already, which is why she can’t get out of the catering job that has her working for little pay. Not even her friend Liz (Megalyn Echikunwoke), who has an advertising gig that gets her a swanky apartment and fun trips, seems like she can help her out much. One day, her coworker hooks her up with a “dummy shopper” gig – where people use stolen credit cards to buy high-ticket items such as TVs – and in an hour, she earns $200. It’s not a bad deal, but it’s not the most laid-back thing you could do. For starters, it’s illegal, and those seconds while you’re waiting for the payment to be processed are the most agonizing, get-your-heartbeat-pumping moments.

Once Emily gets that sweet cash in her hands, she’s hooked. She even starts learning about the business from Youcef (Theo Rossi), one of the leaders of the fraud scheme, and becomes drawn to him in more ways than none. But the more she gets invested, the more she has several close encounters that could completely ruin her life. Youcef’s brother, Khalil (Jonathan Avigdori), also proves to be someone who can stand in her way of financial freedom.

Ford’s script never deviates far from reality, which is why so many scenes will have you on the edge of your seat. Each time Emily is confronted with a job, you can’t help but wonder if this one will be the one that will get her caught. And when things take just a little bit too long to process, you’ll find yourself holding your breath through it all. In those moments, Plaza’s able to keep all microexpressions at bay while still somehow portraying how badly she needs to get out of that situation before anyone realizes they’ve been scammed. When times get really crazy, she never backs down and shows others she’s a force to be reckoned with. Plaza is usually known for her comedic and more sarcastic performances (with a bit of darkness) in films, such as “Ingrid Goes West” and “The Little Hours,” so it’s great to see her dig into a more dramatic role again like “Black Bear.”

“Emily the Criminal” gets many things right, but one area that it doesn’t explore is the fact that she can sneak around while her Black or brown counterparts likely don’t have the same fate. When she attends her first orientation, she’s the only young, light-skinned female in the room, but there’s never a chance to see how others go about dabbling in this shady business. Sure, that could have been a whole other movie, but even adding a tidbit of that here would have given viewers a more complete picture. But as it stands, Ford’s feature directorial debut is exciting and has us craving more of his future work.