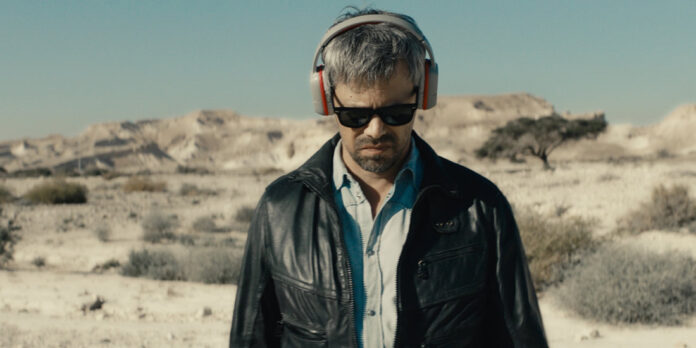 THE STORY – An Israeli filmmaker in his mid-40s arrives in a remote village at the far end of the desert to present one of his films. There, he meets an officer for the Ministry of Culture and finds himself fighting for his freedoms and his mother’s life.

​​​Those who are creative want to have the freedom to express themselves and share their art as they please. It should be a given, but it’s not always the case. “Ahed’s Knee” is a prime example in which Israeli director Nadav Lapid wears his heart on his sleeve. The Israeli government attempts to censor and control artists and how they speak about their work, barring them from criticizing leaders and governmental actions. Art often does challenge those subjects, and to stop an artist from freely doing it takes away their livelihood, but that doesn’t stop some from putting up a valiant fight.

The film starts with director Y (Avshalom Pollak), a rigid, strange, and very unlikeable man, beginning work on his latest project about Ahed Tamimi, a young Palestinian who was imprisoned for slapping two Israeli soldiers outside her home. One threatening tweet from a lawmaker said she should be shot in the kneecap, a body part that Y zooms in on when filming. Getting the project funded may be an issue, especially from national organizations, but Y is determined to see it through.

During this exciting new project, Y heads to a small town in the Arava Desert to screen one of his films. He meets Yahalom (Nur Fibak), a fan of his, and the sexual tension between them is undeniable. She’s also a librarian who reports to the Minister of Culture, and it’s her job to get Y to sign a document that basically restricts him to several topics that he can discuss during his screening, none of them critical of the government. In exchange, he’ll get paid. If he goes against it, he could be destroyed and blacklisted. That sets us off on a story of personal, political, and moral conflicts, with Y sharing a life-or-death experience from his time in the military and crafting a secret plan to show hypocrisy from inside the Ministry. We see his cynicism at an all-time high. Still, it’s contrasted with loving video messages he sends to his ailing mother, who works with him on his films, inspired by Lapid’s real-life relationship with his mother, who edited his first few films.

There’s no denying Lapid’s feelings toward the Israeli government. “I will vomit the Israel out of me into your culture minister’s face,” Y says at one point, which paints such a vivid picture in one’s mind and shows the harsh, deep-rooted views he has. It’s interesting to see him contrasted with Yahalom, who has to enforce the rules that come down from her boss by nature of her job. But when she mentions that she hates the rules too, and Y spots it as an opportunity to secretly record her and expose the true feelings of those working inside the Ministry, it gives us even more insight into the lengths some are willing to go, even at the total expense of others, to protect their creative freedoms. The charge is led by Pollak’s confident, strong-headed performance by the end of the film, letting all types of emotions come out to really drive home Y’s inner thoughts about control. But even before this moment, Pollak gives us a nuanced performance of a very complex and complicated man. We’re led to believe he’s a pompous director — and there’s no denying he is — but he’s also a loving son who wants to capture sunsets and landscapes for his mother, and someone with a very dark past, as seen from his traumatic story about his time in the military. Fibak also shines toward the end of the film, and when she realizes that her life might be over, her fear sends chills down your spine.

Lapid has fun with the visual aspects of this film. Rather than keep the camera straight on a subject, he whips it around to show us the entirety of the space, essentially by following Y’s eye movements and gaze. In one scene, as he’s speaking with Yahalom, we go back and forth between looking at her and then whipping around to the other side of the room. It may be a little nauseating at times and often hard to see anything but blurry lines, but it gives a unique and exciting look to the film — and also shows how little attention Y pays to other people when they’re talking. But close-ups of very unflattering body features — ears and crotch areas — are more distracting than anything else, and random dance sequences stick out, but perhaps it’s Lapid’s nod to Pollak’s choreography background.

“Ahed’s Knee” is not a story about a young Palestinian woman but has a similar type of courage and bravery attached to it. Anchored by strong performances by Pollak and Fibak, Lapid wants everyone to know that no one should be censored, and citizens should be allowed to criticize their government for its faults without fear. Though certain visual moments don’t always work, they don’t stand in the way of a very passionate film.