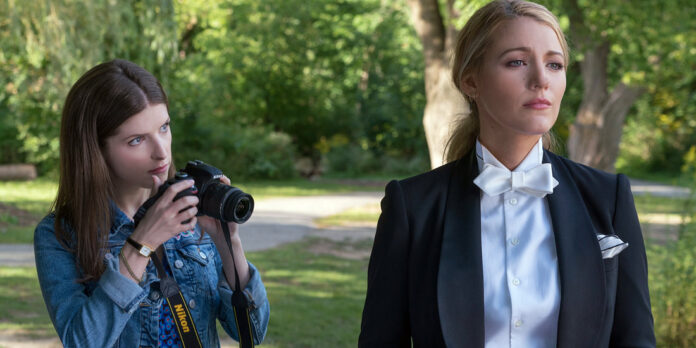 ​​​​​The latest mystery to hit theaters is “A Simple Favor,” starring Blake Lively, Anna Kendrick, and recent breakout from “Crazy Rich Asians” Henry Golding. Neither comedy nor drama, Paul Feig’s newest film somehow both defies genre and also falls into all of the same traps that bad comedies or rote suspense films are known for. It is a rollercoaster of a viewing experience, both unique and familiar, must-see-viewing and only appealing to niche audiences, all at the same time.

The film centers on Stephanie Smothers (Kendrick) a single mom who meets, befriends, and ultimately loses an elusive woman named Emily Nelson (Lively). Stephanie’s charming naiveté is complemented by Emily’s brashness and unapologetic attitude, and the two grow close. After adding Sean Townsend (Golding), Emily’s husband, and their son Nicky (Ian Ho) to the mix, Stephanie sees what she thinks is a perfect life, even after seeing Emily’s unhappiness. One day, Emily asks Stephanie if she can pick her son up from school. Stephanie obliges and then learns Emily has gone missing. Through Stephanie’s support of Sean and Nicky, she comes to realize why Emily was so brash to begin with and uncovers the futility of coveting somebody else’s life.

The premise of “A Simple Favor” is most interesting in the beginning before it proves to unfold exactly how any avid mystery watcher would expect it to. But for every telegraphed moment, there is another action that feels so far out of left field it takes 20 minutes of talking it out in order to figure out the motivations surrounding it. The comedy, what should be the saving grace of a routine plotline, is equal parts fresh and groan-inducing. The audience is left with whiplash after cutting from a great joke, to a genuinely creepy moment, and then leading into a sex scene, followed by a kid cursing for laughs. “A Simple Favor” never fully settles on its tone, which is almost beneficial, until you reach the end and realize that you do not know how you feel about the outcome, and not in a fun, ambiguous way. Mostly, it just feels like Feig wanted to have his cake and eat it too, at the expense of a coherent emotional experience for the viewers.

With such a wishy-washy plot and tone, the movie naturally falls back on its performances to carry it to the end. Generally, Kendrick tends to put in the legwork when her scripts or direction may falter, and this role is no exception. However, her character is written in a way that makes it near impossible to remain invested in her emotional arc throughout the length of the film, no matter how many facial expressions Kendrick throws in. Golding fails to connect with either of his acting partners in any meaningful way, but in a story where the focus is on the friendship of two women, that is an easy transgression to forgive (although, he will need to actually lead a film one day, and his mainstream work so far makes me question his ability to do so). Lively is truly the glue that holds the whole project together. Whenever she is on screen, she is electric, especially when she and Kendrick are sparring partners. Lively manages to intrigue without being heavy-handed, even with a script that may lend itself to overacting. She is the perfect example of someone who is always the best part of bad movies, and difficult films like this only serve to make me wish she had the opportunity to work with a truly great team of creative collaborators. Hopefully, filmmakers will see past the other stumbles and recognize her impeccable work in a role that could have easily fallen apart with a less committed, less clear performance.

“A Simple Favor” is a standout in a sea of films that strive to get by and forget to entertain. While it may have jumped the shark in a few key places, I still think an unoriginally original film like this should get seen in a theater, surrounded by people who are in for the ride with you. If there is one thing I know, you may not love it, but you certainly won’t be bored.