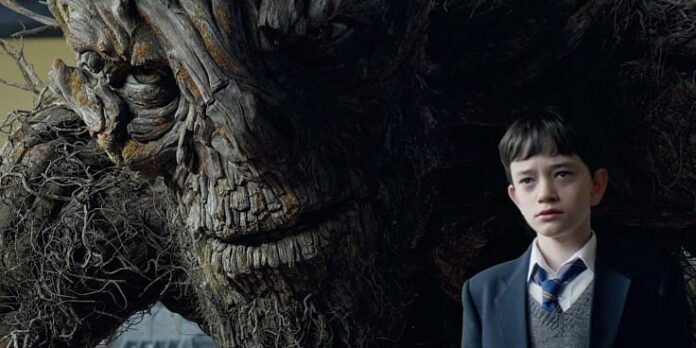 THE STORY – Conor (Lewis MacDougall) is dealing with far more than other boys his age. His beloved and devoted mother (Felicity Jones) is ill. He has little in common with his imperious grandmother. His father has resettled thousands of miles away. But Conor finds a most unlikely ally when the Monster (Liam Neeson) appears at his bedroom window one night. Ancient, wild, and relentless, the Monster guides Conor on a journey of courage, faith, and truth that powerfully fuses imagination and reality.
​
THE CAST – Sigourney Weaver, Felicity Jones, Toby Kebbell, Lewis MacDougall & Liam Neeson

“A Monster Calls” stands as one of the most emotional, imaginative and artful experiences I’ve had the theater all year. It is a grand mixture of many different genres ranging from cancer drama to coming of age story, to fantasy and even animation. It’s dark, it’s magical and it’s all backed by an artistic vision from J.A. Bayona and the film’s breakout star, Lewis MacDougall.

Conor O’Malley (Lewis MacDougall) is a young boy who is going through a rough time at the age of twelve in England as he’s terrorized by a bully at school and has to deal with his mother (Felicity Jones) dying of a terminal illness. Unable to cope with life without his mother and the possibility of having to live with his grandmother (Sigourney Weaver) due to his biological father (Toby Kebbell) living in America, Conor looks towards his imagination to get him through this difficult time. He’s visited every night at exactly 12:07 am by a tree-like monster (Liam Neeson) that he will tell him three stories and that by the time he’s done, Conor will have to tell the Monster the fourth.

I am so impressed with Lewis MacDougall in this movie. For my money, he gives the best youth performance of the year. He has the difficult task of, as the film says, being too old to be a child and too young to be a man. He has to convey the emotions of both sides with moments of denial and aggression, mixed with acceptance, understanding, and remorse. I am truly in awe of his talent and credit to J.A. Bayona for not only casting him but helping him along to get this kind of performance out of him. He’s helped along by strong performances from Sigourney Weaver, Toby Kebbell, and Felicity Jones even if their roles are mostly one-note. Liam Neeson plays “The Monster” in a voice-only performance that is perfectly menacing at times, and soothing and filled with wisdom at others.

Like “Arrival” earlier this year, “A Monster Calls” is much about accepting our own fates, the fates of others around us and how we choose to accept it. It’s a powerful story that is rooted (No pun intended) into the film’s screenplay as the Monster tells Conor three stories of his own as a means of helping the young man cope with the situation he is going through. It’s simple storytelling and us as an audience never lose sight of where this story is heading, but Bayona still manages to turn the waterworks on and leaves us all as a blubbering mess by the end of the film. Seriously people, bring your kleenex to this one.

Technical elements of the film are all exquisite under Bayona’s direction. The cinematography creates some very powerful images and the use of the animated sequences evokes memories of “Harry Potter: The Deathly Hallows Part 1” with its style. The art direction is one of the most memorable aspects of the film for me, which I fear many will not notice. Conor’s room and the graveyard outside of his window all have such detail and beautiful imagery that you can tell that Bayona cares about using the sets to convey feeling, mood, and character. And for a film that was left off the Academy shortlist for Best Visual Effects, those are not too bad as well. The Monster, in particular, feels real and convincing when coupled with Neeson’s vocal performance. And finally the score by Fernando Velázquez tugs at the heartstrings with its piano and strings resulting in those waterworks I was referring to before. All of this happens under the direction of Bayona who in my opinion has crafted his best film so far of the three he has given us and I wait with excitement at what he plans to bring to us in the future.