“A Fistful Of Dollars” Retrospective 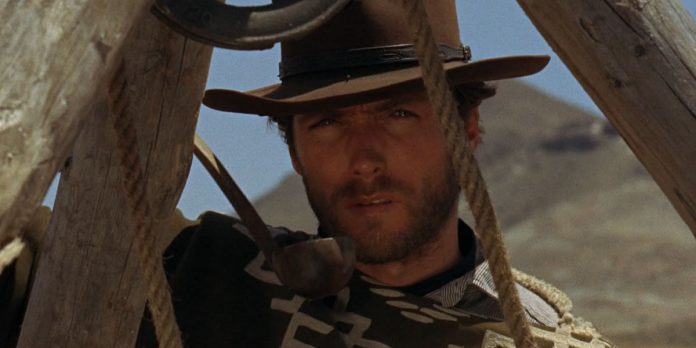 Sergio Leone is a giant of cinema, and while he worked on dozens and dozens of films in various capacities (an influential film director as a father sure helps with that), he only directed 8 of them, most of which deserve high spots on ‘best of’ lists. His 2nd film, “A Fistful of Dollars,” was his first to cause a serious splash in the world of cinema. A remake of Akira Kurosawa’s “Yojimbo,” Leone adapted the story to the American West some time post-Civil War, with up and coming star Clint Eastwood as his terse antihero gunslinger Joe. Leone went on to make two more westerns, each a different type of story but both have Eastwood at the center. “A Fistful of Dollars” is incredibly well done and shows signs of Leone’s greatness to come with its artful camerawork and willingness to tell stories unique stories that kept audiences guessing. However, it doesn’t reach the highs of the other two films, “For a Few Dollars More” and especially “The Good, The Bad, and The Ugly.”

Joe arrives in San Miguel Mexico, a seemingly dead town with only a few cowed citizens remaining beside the two large crime families that alternately sell guns and liquor to whoever has the gold. When one group, the Baxter’s, shoot at his mule on his arrival, he kills 4 of them and then offers his services as a hired gun to their rivals the Roja’s who eagerly accept. The head of the family, Ramon (Gian Maria Volonte), proves to be a despicable man involved in nefarious dealings to achieve his wealth and Joe easily plays the two families off each other resulting in the final bloody destruction of both. Joe doesn’t succeed without cost to himself and others, but he never flags in his determination to meet his goals, not all of which are noble. Throughout the film Ennio Morricone’s impressive score sets the tone perfectly, providing a rich aural backdrop that is imperative to the success of the film.

All of these aspects of the film are remarkable, but it is with the side characters that Leone truly shows his skill in “A Fistful of Dollars.” Silvanito (Jose Calvo) a local bar owner who befriends Joe, gives all the necessary backstory with a few deft scenes that tell us all we need to know in a few crucial moments throughout the film. Despite knowing little about him, his actions are decisive and tell the viewer exactly what kind of man he is and Joe’s efforts would never succeed without his help. The local coffin maker, Piripero (Joseph Egger), is profiting from all of the deaths in town but is also watching the place he lives crumble around him from the grinding forces of the two families. Despite his profits, he endeavors to help Joe and provides the only comic relief with his facial expressions and few words of dialogue. Ramon keeps one of the local women, Marisol (Marianne Koch), as his sex slave and her story along with her small child and desperate husband are a telling example of how this situation has affected the town while also giving Joe the opportunity to show his inherent benevolence towards the downtrodden.

These few characters are all that is necessary to populate this small town, Leone makes them feel real and as though their stories continue after this one comes to a conclusion. While Joe is the protagonist of the story, we learn nothing about his past and instead become engrossed in the fate of these people. Leone’s talent as a director grows exponentially with every film he made, and that growth is particularly obvious in his “Dollars Trilogy.” Each one offers something new to marvel at, and while the side characters in the other two are also intriguing, for me they are the high point of an already fantastic film that is well worth watching over and over again.

Have you seen “A Fistul Of Dollars?” Have you seen other Sergio Leone westerns? What do you think? Let us know in the comments section below or on our Twitter account.