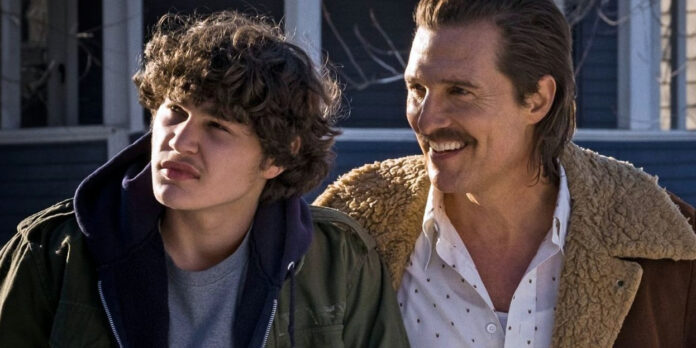 THE STORYRick Wershe is a single father who’s struggling to raise two teenagers during the height of the crack epidemic in 1980s Detroit. Wershe sells guns illegally to make ends meet but soon attracts attention from the FBI. Federal agents convince his son, Rick Jr., to become an undercover drug informant in exchange for keeping his father out of prison. When young Rick gets in too deep, he finds himself seduced by the lure of easy money and becomes a drug dealer himself.

​​​​​In the 1980’s crack-cocaine was considered an epidemic in America and Detroit was hit hard due to the economic downturn, racism, and several other nuanced reasons I won’t get into here. While crack addiction and drug dealing is something that is often portrayed as a thing that only affected the black community, “White Boy Rick” tells the story of a young white kid’s experience in the world of drug crime during the 1980’s. The films focus is firmly on Rick and his white family, but the majority of the cast is black and although the film makes some attempt to clarify that those who suffered the most from inequality and racist policies were the black community you cannot escape the focus being squarely on white people in this story.

The film opens in 1984, Rick Jr (Richie Merritt) is just 15 years old and his drug-addicted sister Dawn (Bel Powley) has moved out while his father, Rick Sr (Matthew McConaughy) who sells guns to make a living, is just barely scraping up enough money to keep them in their house.  When the FBI comes calling to put the screws to Rick Sr for selling silencers along with his weapons, they manage to convince Rick Jr that unless he helps them with their efforts to bust local drug dealers, his dad will end up in prison. Rick Jr reluctantly agrees and before long finds himself selling crack in direct competition with his best friend’s uncle, Johnny Curry (Jonathan Majors) who ends up taking Rick under his wing rather than running him out of business. Before long things begin to fall apart and a drive-by gone wrong sets events in motion that result in Johnny Curry’s gang being arrested and Rick finding himself with an opportunity to take over Johnny’s spot as the local drug kingpin.

Rick Wershe Jr was a real person and the events told in “White Boy Rick” are all based in fact, although they have certainly been embroidered to make them more cinematic and interesting to audiences. It is always difficult to cram a true crime story into the typical plot points of a dramatic film, and “White Boy Rick” has only middling success in its attempt at doing so. It does it’s best to make the story flow seamlessly, but it also aims to give the tale of Rick Jr.’s actions a full accounting leaving us with a film that sometimes feels like a well-done family melodrama and at others like a flashy gangster story. At times both styles work, particularly when we are seeing the experience of Rick Sr as he struggles to deal with his son’s choices or when Rick Jr is living it up with his friends. But all too often the story feels as though it is packed with so much detail that it becomes tedious. Events that should be impactful are given only moments of screen time and all too soon fade into the background without making a dent in the viewer’s experience.

While the film has its plotting problems, it is still very engaging. The cinematography is gorgeous with delicate lighting and a great blend of shot styles that are chosen to fit the mood of the scene. Cinematographer Tat Ratcliffe and Director Yann Demange have worked together before in the film ’71 and their combined style has only improved since then. Richie Merritt gives a subtle performance as Rick Jr that works well for the role he is playing and he is able to bring out every bit of the intense emotion that is needed during the film’s final moments. As Rick Sr, Matthew McConaughey is fantastic, sporting a ridiculous mullet and an outsized personality he portrays a troubled man who is failing his children despite making his best efforts. His emotional scenes are the best parts of the film, as his every feeling flickers over his features and without a word of dialogue we know exactly what he is going through.

As a film “White Boy Rick” has an interesting story to tell and it is decently told, but that doesn’t negate a fact that even the film itself admits, which is that so many of these types stories are the stories of people of color due to the racist policing efforts in America. While white audiences will pay more attention to a story with characters that look like them, the flip side of that is that focusing on white lives in these situations relegates people of color to the background. That “White Boy Rick” is based on true events is what prevents it from feeling like a blatant attempt to whitewash a story about crack in Detroit in the 1980’s. Combining its great performances and beautiful cinematography, the film is certainly worth watching, but at the same time, it is important to keep in mind from what perspective that story is being told.