Which Film Can Challenge “The Power Of The Dog” For best picture? 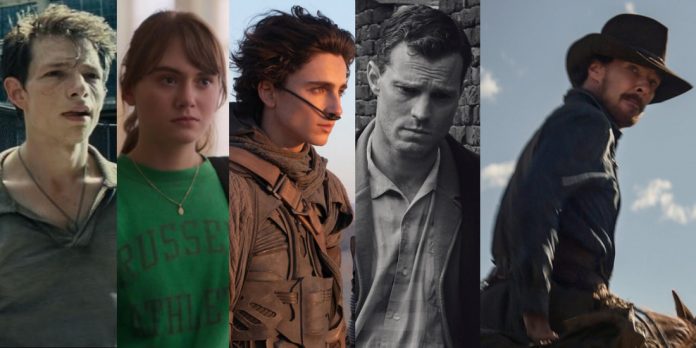 With six weeks left until the Oscars on March 27th, it cannot be said with 100 percent certainty that “The Power of the Dog” will win Best Picture. Yet there’s a 50-50 chance at the minimum that we are just telling ourselves it could lose if only to pretend there’s still any genuine suspense left. While “The Power of the Dog” hasn’t clinched the win yet, its 12 nominations on Oscar nomination morning and the various key misses and underperformances from competitors like “Belfast,” “West Side Story,” “Licorice Pizza,” “Dune,” “Don’t Look Up” and “CODA” do not paint a pretty picture for the field.

As such, to those already convinced “The Power of the Dog” has Best Picture locked, the only real suspense may be over who the runner-up is. While “Belfast” has been regarded as the heavy favorite in that race for a while, this mainly hinges on the assumption it will win Best Original Screenplay, whether or not that keeps it alive for Best Picture as well. The case for “Belfast” taking screenplay was strengthened on Oscar nomination morning, if only because its top competition in “Licorice Pizza” underperformed with just two other nominations. But otherwise, “Belfast” had some significant misses of its own, notably in missing Best Editing and in having its strongest Best Supporting Actress candidate in Caitriona Balfe get snubbed for co-star Judi Dench’s extended cameo. Unless the Academy is genuinely that devoted to Dench, and unless Jane Campion has a significant stumble in Best Director, “Belfast” is still right where it’s been for some time now – with no path to winning any major non-Best Picture category besides Best Original Screenplay.

That one category is the only reason “Belfast” is still in Best Picture contention at all, which doesn’t seem to make it a very strong candidate. At this point, it might only win screenplay as a collective victory while getting shut out everywhere else, or the narrative for Paul Thomas Anderson’s first Oscar victory could still push “Licorice Pizza” over the top and get “Belfast” shut out entirely. Going from preseason favorite to a total shutout following a Best Original Screenplay loss happened to “The Trial of the Chicago 7” last year, so it is hardly an unprecedented downfall. Considering the potential parallels with the previous year’s race, it might be all too fitting. Like “Nomadland” last year, “The Power of the Dog” was an unlikely awards juggernaut at first, compared to more traditional competitors and films that supposedly had more passionate support. However, because “The Trial of the Chicago 7,” “Promising Young Woman,” “Minari,” “Sound of Metal,” “Mank,” and “Judas and the Black Messiah” were so crowded together on their own, none of them ever became a sustained threat to win it all. In fact, it only became apparent at the end that the late-breaking “The Father” was the most likely runner-up in 2020, and it was probably a distant runner-up even with its Best Actor and Best Adapted Screenplay upsets. In 2021, that formula seems primed to repeat, as “The Power of the Dog” may sit comfortably ahead while its competition cancels each other out just to become the runner-up. But if “Belfast” loses Best Original Screenplay or can’t win anything else, it’s less clear than ever what could possibly be in second place, let alone a film that could actually pull a Best Picture upset.

For a long time, “Licorice Pizza,” “West Side Story,” or “Dune” traded places as the next most likely frontrunner besides “Belfast.” But each one had significant snubs that left them perhaps in the middle of the pack or worse. Perhaps the most startling disappointment came from “Licorice Pizza,” after its strong performance at BAFTA raised hopes for a significant Oscar surge. But when Alana Haim missed out in Best Actress, Bradley Cooper missed in Best Supporting Actor, and the film was snubbed in Best Editing too, its nominations for only Best Picture, Best Director, and Best Original Screenplay felt more like a death blow.

After some critical snubs from guilds and BAFTA, the downfall of “West Side Story” wasn’t so surprising. Its seven nominations and the inclusion of Steven Spielberg in Best Director were considered a pleasant surprise. But without Tony Kushner getting into Best Adapted Screenplay, thereby cutting off a potential upset over Campion, it dramatically limits any path to a Best Picture resurgence. With Ariana DeBose still presumably favored in Best Supporting Actress unless the film stumbles further, the Academy may make that the lone win for “West Side Story” and call it a day, unless Spielberg stages a major rally against Campion.

At the least, “West Side Story” can still surge in Best Director and upend the race, unlike “Dune.” The shocking Best Director snub of Denis Villeneuve likely ended any chance of “Dune” winning anywhere besides the tech categories unless it gets a truly shocking upset for Best Adapted Screenplay. Yet because of its likely tech sweeps, “Dune” could still wind up the No. 2 film by default, though the Villeneuve director snub still puts a big hole in that theory. But unlike fellow Best Picture and multiple below-the-line nominee “Nightmare Alley,” “Dune” at least has one above-the-line nomination besides Best Picture.

There was a time when “CODA” seemed poised to do what “The Father” did: surging late to win two major categories. The path is still open for it if Troy Kotsur can upend Kodi Smit-McPhee in Best Supporting Actor and if it can win at the WGA as a springboard towards an Oscar upset. But unlike “The Father,” “CODA” didn’t do much on nomination morning and only got into Best Picture, Best Supporting Actor, and Best Adapted Screenplay. As such, it may have either peaked too soon or never really had enough broad momentum.

“Don’t Look Up” could have very easily surged up the ranks, if only from the voters who actually didn’t hate it. Yet like “Licorice Pizza” and “CODA,” the far less critically adored film underperformed beyond its major nominations, as it only made four categories and got snubbed in Best Director and all the acting fields. It could still upset in Best Original Screenplay and set Film Twitter on fire that way, but like “Licorice Pizza” and perhaps “Belfast,” it doesn’t seem to have much momentum to win anything else.

On the polar opposite of the spectrum is the year’s biggest critical darling besides “The Power of the Dog,” as international film favorite “Drive My Car” got into Best Picture, Best Director, and Best Adapted Screenplay. A Best International Film win could well be its sole collective victory. Yet, if voters want to give it a win against American competition, Best Adapted Screenplay is probably the most open category. Whether that would clearly make it the runner-up in Best Picture is uncertain, but like “The Father,” it might get there because nothing else has more than one significant win.

Out of all films besides “The Power of the Dog,” the only one that hit all its potential nomination targets was “King Richard,” though it looked fairly vulnerable beforehand. Yet unlike “Licorice Pizza,” “CODA,” and “Don’t Look Up,” “King Richard” was on the right side of all its bubbles and resurged with six nominations. Nevertheless, while this may eliminate any doubt over Will Smith winning Best Actor, it still looks unlikely to take anything else. Yet if it keeps surging enough to make Aunjanue Ellis a threat to DeBose in Best Supporting Actress, maybe two acting wins will be how “King Richard” takes the No. 2 position on Oscar night.

Maybe telling ourselves that anything other than “Belfast” can be the No. 2 film only keeps the illusion of suspense alive. Given that “Belfast” still needs several breaks to win it all, even if it does take Best Original Screenplay, we may be telling ourselves a lot of lies in the next six weeks over how suspenseful this race really is just like much of last year. In the end, the only chaos in Best Picture last year was over who the runner-up was – and that was at least a race to the finish with a late upset. Thanks to “Belfast,” it might not look like such a race this year, yet it might not be so simple if it only wins Best Original Screenplay or gets blanked completely. But since only the Best Picture winner won more than one above-the-line Oscar in 2011, 2014, 2018, and 2019, it wouldn’t be unusual if “The Power of the Dog” was the only film to do it this year, whether it completely sweeps or not. If something shocks “The Power of the Dog” in Best Picture, that will clearly make it the runner-up and end any doubt that way. But if it does win big on Oscar night while nothing else has more than one major victory, and if “Belfast” has no wins at all, the question of who is No. 2 in 2021 will be the year’s biggest unsolved mystery.

So what do you think? Do you think any other Best Picture nominee stands a chance at taking down “The Power of the Dog?” Which film would you consider to be the No. 2 to it in the Best Picture race? Check out the NBP team’s current Oscar predictions here (you can also listen to them on this week’s Next Best Picture Podcast here) and let us know your thoughts in the comments section below or on our Twitter account.