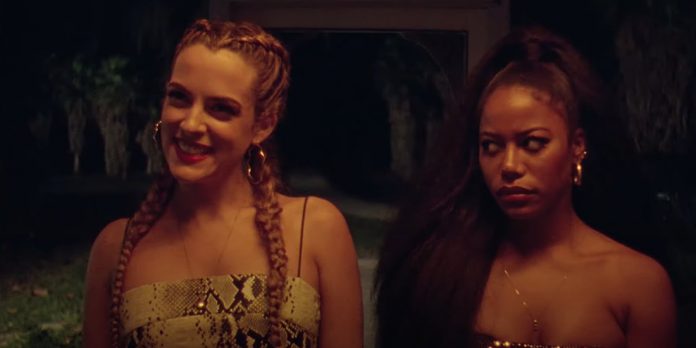 By Matt Neglia
​
A24 has released the trailer for “Zola” starring Taylour Paige, Riley Keough, Nicholas Braun, Ari’el Stachel & Colman Domingo. It will be released in theaters this summer.

​Plot Synopsis: The film is based on an infamous 148-tweet Twitter thread in which Zola meets a sex worker named Stefani at a restaurant where Zola waitresses, and the two immediately bond over pole dancing. Only a day after they exchange numbers, Stefani invites Zola on a cross-country road trip, where the goal is to make as much money as possible dancing in Florida strip clubs. Zola agrees, and suddenly she is trapped in the craziest, most unexpected trip of her life, partaking in a wild two-day trip with Stefani, her boyfriend Derrek, and Stefani’s violent pimp, X.

What do you all think of the trailer? I was lucky enough to see this film at Sundance over a year ago where it premiered and I was unprepared for how wild this story was (I was unfamiliar with the infamous Twitter thread it is based on). Those who go in blind will be rewarded by the film’s many twists and turns. This will serve as a breakout role for Taylour Paige and Riley Keough has never been better. The trailer perfectly captures the tone of the film and I cannot wait for you all to check it our yourselves. Let us know your thoughts though in the comments below or on our Twitter account.