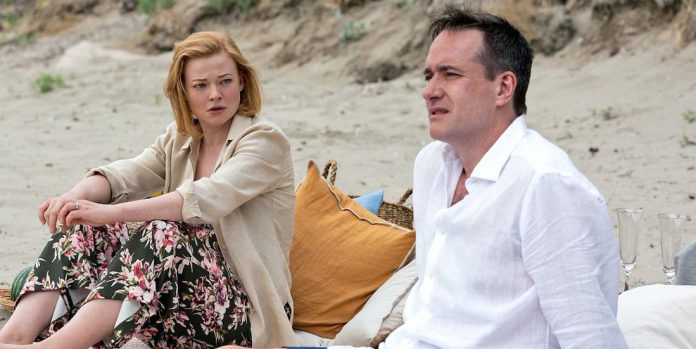 By Rebecca Daniel
​
This year has turned everything upside down, including some of the most significant award shows in Hollywood. The Emmys are going to be wildly different: television’s biggest night will be broadcast via Zoom (even celebrities have to use it!). When the nominees were announced on July 28th, two particular categories stuck out to me: Outstanding Supporting Actor in a Drama and Outstanding Supporting Actress in a Drama. The field is stacked with incredible talent from some of the best drama series currently airing. There are eight actors and actresses nominated each. Let’s take a look at these nominees!

“Succession” is leading the pack with three nominations and the best odds of a win. I’m a huge fan of the show and think Matthew Macfadyen has an excellent chance at the Emmy for his work as Tom Wambsgans, the aloof, hilarious, and tricky husband of Shiv Roy (played by Sarah Snook). He has so many standout moments in season two, particularly in the final episode, “This Is Not For Tears.” However, Kieran Culkin is always a scene-stealer as Roman Roy, the black sheep of the family. Roman has a fascinating arc in season two which showcases Culkin’s acting ability. But we have to talk about Nicholas Braun, who plays the always awkward yet cunning Cousin Greg. Braun went from a supporting actor in “Sky High” (we will never forget) to an HBO fan favorite. I would be cheering if he won an Emmy.

Speaking of cheering, Apple TV is probably rejoicing as “The Morning Show” follows closely behind “Succession” with two nominations in Outstanding Supporting Actor Drama. Billy Crudup’s role as Cory, head of the network, secured one slot, and Mark Duplass as head producer Charlie got the other.

While “Succession” and “The Morning Show” count for five of the nominees in the category, we can’t count out Giancarlo Esposito for his work as Gus, the intimidating drug lord in “Better Call Saul” (Esposito is also nominated for Best Drama Guest Actor for “The Mandalorian”).

Then there’s Jeffrey Wright’s Bernard on “Westworld,” the robot struggling with identity. This is Wright’s third Emmy nomination for “Westworld” and fourth nomination overall (He was previously nominated for “Angels in America”).
Rounding out the nominees is Bradley Whitford’s turn as the evil Commander Joseph Lawrence on Hulu’s “The Handmaid’s Tale.”

This is such a strong category that one has to wonder who the Academy will vote for. Also, one has to take into consideration, with three actors nominated for “Succession” and two for “The Morning Show,” could they end up canceling each other out and splitting the vote? Let’s get to Supporting Actress.

“Big Little Lies” leads the Outstanding Supporting Actress Drama category with two nominations for Laura Dern and Meryl Streep. Streep plays the conniving mother-in-law to Nicole Kidman’s Celeste in the second season of the show. (Truthfully, it’s a shock that Kidman isn’t a Lead Actress nominee this year.) While Streep provides many memorable moments in season two (everyone has seen the screaming meme at this point), it’s Dern who had the breakout season as Renata Klein. Renata has a huge arc in season two with some iconic moments. Does anyone remember Renata wielding the bat in Gordon’s man cave? Or her driving down the road screaming, “Can someone give a woman a moment?” Last year was the year of the Dern, and she could receive an Emmy on top of her recent Oscar win for “Marriage Story.”

Sarah Snook is one to watch out for in this category for her work as Shiv Roy in “Succession.” While season one is heavily focused on Kendall (played by Jeremy Strong), season two of “Succession” is, in many ways, Shiv’s season as she prepares to potentially take over Waystar Royco from her father, Logan Roy (played by Brian Cox). Snook has layered performance brimming with confidence, strength, and vulnerability that could easily earn her an Emmy.

Julia Garner has time and time again given out award-worthy performances. If anyone has not watched “Maniac” on Netflix, you should. Garner won the Best Supporting Actress Emmy award last year for her work as Ruth on Netflix’s “Ozark.” The new season has only increased the show’s popularity, and Garner’s performance has gathered rave reviews from critics and fans alike.

Season three of “The Crown” finds itself with three nominations. Don’t count out Helena Bonham Carter for her work as Princess Margaret on the Netflix Drama. Bonham Carter depicts such epic highs and painful lows as the princess that you can’t help but feel her pain while watching as an audience member.

Thandie Newton finds herself as an Emmy nominee again after winning Outstanding Supporting Actress in a Drama for “Westworld” in 2016. Can she repeat the win for her work as Maeve Millay? Newton has admitted to being “frustrated” with her character in the third season of the HBO sci-fi drama, but that doesn’t take anything away from her performance.

Samira Wiley’s work as refugee Moira in “The Handmaid’s Tale” earned her the third consecutive Emmy nomination for playing the character.

Finally, Fiona Shaw rounds out the nominees for her work as Carolyn in “Killing Eve,” the head of MI6 Russia desk.

Even though the show will be broadcast virtually, the Outstanding Supporting Actor and Actress in a Drama categories prove this will still be an exciting year for the Emmys. The talent nominated are some of the best working on television today. Who would you like to see win in these categories? What are your predictions? Let us know your thoughts in the comments section below or on our Twitter account.