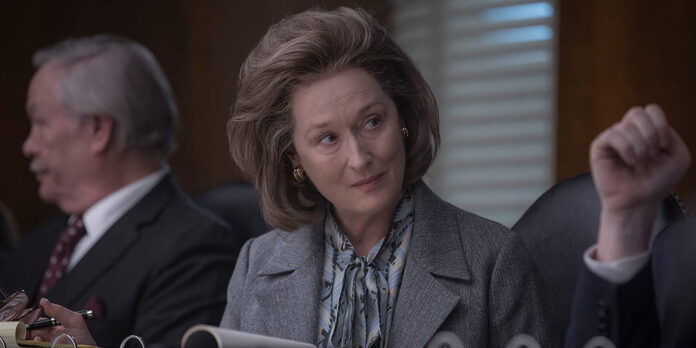 THE STORYKatharine Graham is the first female publisher of a major American newspaper — The Washington Post. With help from editor Ben Bradlee, Graham races to catch up with The New York Times to expose a massive cover-up of government secrets that spans three decades and four U.S. presidents. Together, they must overcome their differences as they risk their careers — and very freedom — to help bring long-buried truths to light.
​
THE CAST – Meryl Streep, Tom Hanks, Sarah Paulson, Bob Odenkirk, Tracy Letts, Bradley Whitford, Bruce Greenwood & Matthew Rhys

​I cannot think of a more timely film than Steven Spielberg’s “The Post.” It’s virtually impossible to separate it from the current political landscape of today. But I shall try my hardest to keep present-day politics out of it and address the film at hand as future generations will see it. In the grand scheme of things, there’s nothing about “The Post” that ranks as the finest of Steven Spielberg’s career. Nothing in terms of how it is edited, shot, scored or yes, even acted for that matter matches the countless other masterpieces that he has given us before. Rather, what “The Post” accomplishes is it brings together a solid ensemble, provides them with a solid screenplay and gets a solid directorial showing from Spielberg. The result is a film that, taken as it is, may not be the most remarkable film you see all year, but should you choose to allow other outside influences to persuade your opinion, the final product will either be better or worse depending on your political viewpoints. That’s all short to say that what “The Post” does, it does very well and this will inspire some just as much as it will anger some.

After the untimely death of her husband, Katharine Graham (Meryl Streep) becomes the first female publisher of a major American newspaper – The Washington Post. During the 70’s, editor Ben Bradlee (Tom Hanks) and his team of journalists and reporters come into possession of thousands of papers of government secrets and cover-ups pertaining to the country’s involvement in the Vietnam War. Doing their best to publish the story first before anyone else does, the Post comes under heavy fire from the White House administration, led by Richard Nixon, after The New York Times is stopped from publishing the story and further. The threat of legal action resulting in potential jail time looms over Kay and Ben as the decision to hold those in power responsible and their obligations to the American people as journalists clashes with their ideologies and basic human concerns.

Tom Hanks plays Ben Bradlee with a gruff and tough exterior and strong resolve. He’s a man with nothing to lose who is hell-bent on his duties and obligations to the American people to report the news and report it first before his competitors do. Meryl Streep as Kay Graham, has everything to lose and has the hardest decision of all to make. As the owner of the paper, she must listen to everyone’s advice and choose whether or not to publish the Pentagon Papers Which could result in the loss of her fortune and the complete collapse of the company that has been in her family for decades. It is here that the film finds its most interesting and compelling storytelling point: fear versus obligation. Of course, there is fear tondo the right thing. Prison sentences, the loss of your business (Your livelihood) and also the employment of everyone underneath you is nothing to scoff at and Meryl being the gifted actress that she is, allows us to enter into Graham’s headspace so that we too may feel the weight of this decision. She’s not the only one though. As journalist Ben Bagdikian, Bob Odenkirk must also make a decision over whether or not to reveal his source for the Pentagon Papers. Does he betray this person’s trust and make a choice which could lead his source to jail? Or does he keep this person’s identity a secret and jeopardized the whole story as a result? He is the man caught in-between both Ben and Kay. Torn between his duties as a newsman to publish a story and his understandable fears and doubts as a human being. There’s a scene in the film where Graham has to confront an old friend, Robert McNamara (Bruce Greenwood), over his involvement in the coverup of the country’s actions in the Vietnam War. McNamara is an example of what happens when you make the wrong decision given a choice between what is morally right versus your personal reputation. It’s a theme which carries through the entire film and is one that serves as an important less to hold those in power accountable for their actions. Decisions must sometimes be made. Yes, there are compelling reasons on both sides over what to do. But what Josh Singer and Liz Hannah demonstrate in their screenplay is that when we make a decision from a place of fear instead of what we know is right, we ultimately have chosen wrong.

Technically, “The Post” might be the breeziest Steven Spielberg film since “Catch Me If You Can.” The film boasts some rigorous editing that moves the action quickly, creating a dramatic urgency to the story and that doesn’t allow it to overstay it’s welcome. This can be a bit jarring at the beginning of the film as it struggles to find its footing and really suck us into the characters and drama which comes later. An extended opening sequence in Vietnam equipped with action-combat scenes feels like it belongs in a totally different movie (Think of the brief glimpse of the Civil War battle from Spielberg’s other civics lesson history film “Lincoln”). Production design and costumes are not exceptional but cinematographer Janusz Kaminski finds interesting ways to shoot the film with its limited color and design palette. His lighting and camera work never let up as he finds interesting ways to also keep the camera moving, thus complimenting the editing style. Spielberg knows when to allow certain shots to linger on (Look no further than the five minute extended shot where Hanks and Streep share the frame for the first time) and he also knows when the story needs to be moving rapidly so as to not lose audience interest in a story that plays out predictably as one would expect.

There are no twists in “The Post.” There are no dramatic flourishes needed to beef up the story and make it any more dramatic than the real story already was. There is nothing but solid filmmaking, solid performances, a solid screenplay and of course, who could ever complain about a new piece of John Williams music? Maybe one can complain when his music is overpowering a terrific monologue by Meryl Streep but one can forgive such ostentations when the acting by Streep is this good. She has not been this grounded or nuanced in years as the timid woman in power who despite her wealth and place in the world, is constantly being reminded by the men around her that she simply does not belong. Both her and Ben Bradlee’s arcs reach a satisfying place by the end of the film but Spielberg can’t help himself. He’s Spielberg. He’s made a career off of pandering to his audience and giving us neat bow-tied moments that define the word “cheesy.” On the nose dialogue about the duties of the press and not so subtle moments such as when Graham is surrounded by women on the steps of the Supreme Court, all looking up to her and idolizing her, are hallmarks of the director’s ability to create a crowd-pleasing film but will make more serious moviegoers possibly roll their eyes. All in all, “The Post” is not a perfect film. I struggle to say it is even a great film. However, in terms of its timing (And thus, increasing its likelihood to be perceived as great), “The Post’s” release and the combined efforts of all the filmmaking talents involved to bring its message to the country, is absolute perfection for what we need right now.​