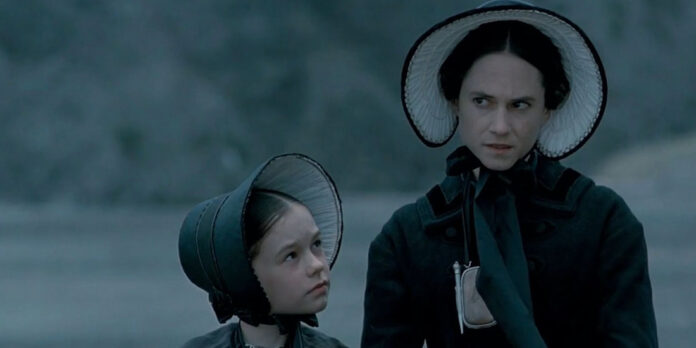 THE STORY – After a long voyage from Scotland, pianist Ada McGrath (Holly Hunter) and her young daughter, Flora (Anna Paquin), are left with all their belongings, including a piano, on a New Zealand beach. Ada, who has been mute since childhood, has been sold into marriage to a local man named Alisdair Stewart (Sam Neill). Making little attempt to warm up to Alisdair, Ada soon becomes intrigued by his Maori-friendly acquaintance, George Baines (Harvey Keitel), leading to tense, life-altering conflicts.

With Jane Campion on the brink of likely winning the Oscar for Best Director for “The Power Of The Dog” this weekend, it’s the perfect time to look back at her 1993 Oscar-winning period drama, “The Piano.” Like this past year’s “The Power Of The Dog,” Campion both wrote and directed “The Piano,” but it bears a more striking resemblance to the most likely challenger for this year’s Best Picture Oscar. Young Flora (Anna Paquin) translates for her mute mother Ada (Holly Hunter), similar to the protagonist of “CODA.” Though they’re set in different periods and on other continents, both explore the effects this has on the parent-child relationship.

In “The Piano,” Ada and her daughter Flora travel to a remote part of New Zealand for an arranged marriage to landowner Alisdair Stewart (Sam Neill). Ada hasn’t spoken since she was a young girl, but her daughter translates her sign language for other people so that she can be heard, even if she’s never fully listened to. The pair are both reluctant about the marriage, particularly when Alisdair announces that they won’t be able to bring Ada’s beloved piano that was shipped with her up to their new home, causing Ada to resent him. Upset at being separated from her piano, Ada convinces Alisdair’s friend George Baines (Harvey Keitel), a former sailor who has adopted many Maori customs, to take her and Flora to the beach so that she can play it. George finds Ada’s playing as spell-binding as the audience does and trades Alisdair a piece of land for the piano and lessons from Ada. But George isn’t interested in learning to play; instead, he offers to allow Ada the chance to play her beloved instrument in exchange for favors that grow more sexual in nature over time.

The romance, if one can call it that, of “The Piano” between Ada and George is arguably the least successful part of Campion’s story. George and Ada eventually bond and consummate their relationship, but it’s unclear what Ada’s sexual agency actually is. Is she simply infatuated with having a choice for once in her life, or has she been coerced? Either way, carrying on an affair so close to her husband’s house eventually yields disastrous results for Ada, and we, the audience, are left unsure as to what Campion’s true intentions are.

The film would have benefited from delving more into its theme of colonialism as the George Baines character is integrated into the Maori community and even has tattoos on his face as they do. At the same time, Alisdair still maintains as close to a British way of life as possible despite being far from home. Their attitudes towards the Indigenous people seem to reflect the two men’s characters in general, but this concept isn’t developed as strongly as it could have been.

It’s perhaps unfortunate that the ending in the film that we watch is not what Campion originally intended, which was initially planned to be much more tragic for Ada. In fact, the combined happy-sad end that remains seems to dampen the themes and message of the story as a whole. Regardless, the image of Ada floating underneath the water tied to her piano at the bottom of the ocean is a haunting one that can stay with the viewer long after seeing it.

Hunter’s Oscar-winning performance is the strongest in the film, from how she comes alive while playing the piano to how well she can emote without speaking a single word. Instead, Ada communicates through the two things she loves most – her daughter and her music – and Hunter portrays this beautifully and effectively. Unfortunately, both Neill and Keitel give fine but bland performances and seem miscast in both of their roles. Paquin famously won the Oscar for Best Supporting Actress for the role of Flora at the young age of 11 years old. She’s the epitome of precociousness and, like a miniature version of Ada, in a genius stroke of casting considering that Paquin has grown up to resemble Hunter. She gets her big moment to shine when she falls to pieces during a traumatic moment between Alisdair and Ada, but some of her work is even more subtle. She perfectly shows the false maturity of Flora because she’s spent so many years helping her mother, but how she is still too young to understand the complexity of the situation that Ada finds herself in with George.

While Campion’s screenplay may leave viewers challenged, “The Piano” remains an expertly crafted work of art, from the sound work with the waves on the beach to the beautifully melancholy piano-heavy score by Michael Nyman. The film has a very distinct muddy and grey look, thanks to the cinematography by Stuart Dryburgh, which fits how Ada feels about her life, devoid of warmth and vibrancy. While this aesthetic doesn’t show Janet Patterson’s costumes in the best light, she still does an excellent job of showing how much or how little each character fits into the world they’re inhabiting. Ada’s structured dresses and bonnets make her stand out from the more relaxed styles of the New Zealanders, and the angel wings that Flora wears for her school pageant are ironic, considering how she ultimately “betrays” her mother later in the film.

“The Piano” was a critical and commercial success when it was released in 1993 and won three Academy Awards. It also won the Palme d’Or at Cannes, making Campion the first female director to receive the prestigious honor. In some ways, it has come to stand for achievement in female filmmaking as one of the first female-directed and female-led films in the modern era to be taken seriously by various awards bodies, with Campion being the second woman ever to be nominated for the Oscar for Best Director. However, this legacy gives “The Piano” a lot to live up to for a first-time modern viewer, and it’s unfortunately not entirely able to deliver. The audience can form a strong connection with Ada, as confusing as her motivations might be at times, but the other characters are less enthralling. In addition, the discomfort of the romance plotline can make it a difficult film to know how to react to through a modern lens. Regardless of its faults, “The Piano” demonstrates Campion’s masterful work as a director through Hunter’s performance and the beautiful craftwork on display.