The Oscar Chances For “The French Dispatch” 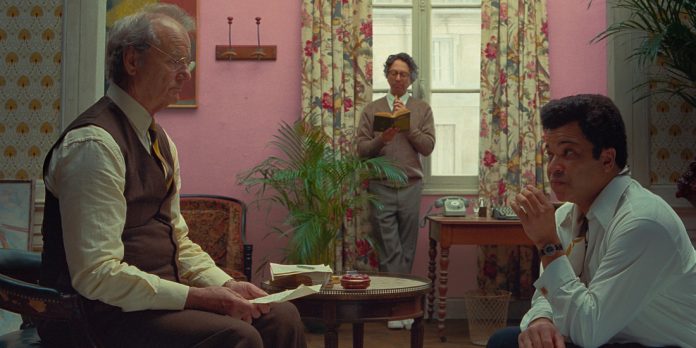 Wes Anderson’s latest film, “The French Dispatch,” is an anthology of several stories depicting a fictional France-based Kansas newspaper. It opened in theaters recently and received mixed to positive reviews following its world premiere at the Cannes Film Festival. The word-of-mouth from audiences since its theatrical release has been much kinder, as it’s well-liked by both the older crowd and Anderson’s typical millennial supporters. This begs the question: what will the Academy make of “The French Dispatch“?

Many Oscar pundits wrote the film off once it was deemed not to be Anderson’s masterpiece. Still, the film’s charm could play well to older Academy voters and be a film they enjoy and remember as fondly as Anderson appreciates and reflects on a more idyllic past. Anderson is also now “in the club,” having received writing nominations for “The Royal Tenenbaums,” “Moonrise Kingdom,” and “The Grand Budapest Hotel,” (along with Best Picture and Director nominations) as well as Animated Feature nominations for “Fantastic Mr. Fox” and “Isle of Dogs.” He is clearly an Academy favorite (at least with nominations), so I  think it might be premature to write the film off just yet.

Even if some critics or audiences are mixed on the film’s story, the level of craft put on display is undeniable. The film’s easiest road to an Oscar nomination or win is through its technical achievements. A Best Production Design nomination is easily its likeliest nomination (it’s being heavily predicated on our site at the moment). The pastel-colored, intricate set design for its various locations, both based on real and fictional places in France, is too awe-inspiring to be wholly ignored. The cinematography is also a stand-out. While not heavily predicted at the moment, it could surprise with a nomination if other contenders disappoint due to its blending of color and black-and-white, the changing aspect ratios, and the use of animation, not to mention the impressive framing and lighting in literally every shot. Perhaps some of the best of the year, it is flashy work that I could easily see the branch wanting to recognize.

On the other hand, Best Costume Design and Best Makeup & Hairstyling, I do not foresee happening, even though “The Grand Budapest Hotel” won both of those categories in 2014. While there are a lot of actors to apply different costumes and makeup appliances to throughout, and none of the work is bad by any means, I feel barely any of it will overwhelmingly stand out compared to the flashier and more high-profile contenders like “House of Gucci,” “Spencer,” and “Dune.” I actually do think it could be an outside contender in Best Film Editing (though not nearly as likely as Best Cinematography). Suppose other contenders, still unseen, end up failing, or the branch goes for showier work? In that case, “The French Dispatch” is right there with its flashy editing, so dependent on timing given its whimsical and comedic nature.  It’s probably unlikely, but I wouldn’t rule it out. The only other nomination I think the film could get (and likely will) is Best Original Score. Alexandre Desplat is such an Academy favorite now amongst the Score branch that he practically gets nominated almost every year now. Even if the work might not seem as deserving by some critics and viewers, I think it will still show up on nomination morning regardless.

Besides the iconic playfulness and technical craftsmanship, Wes Anderson’s films are most recognizable for his reoccurring work with his actors. None have received Oscar nominations for his movies, though some have gotten close (Bill Murray in “Rushmore,” Gene Hackman in “The Royal Tenenbaums,” Ralph Fiennes in “The Grand Budapest Hotel,” etc.). However, with “The French Dispatch” being an ensemble film, all of the performances qualify under the Supporting categories, and perhaps the most buzzed-about one that could crack either lineup is Jeffrey Wright as he leads the film’s final segment, “The Private Dining Room of the Police Commissioner.” Wright is a beloved Emmy and Tony Award-winning actor who has yet to receive his first Oscar nomination but has consistently delivered excellent work for years. He has worked on countless high-profile projects and with many people in the industry (do not count out a SAG nomination at the very least). His character stands out not just in his story but in the overall film for his vulnerability, charisma, and wit. He also has a brief but pivotal and emotional part in this year’s “No Time To Die.” Again, like the crafts, as other contenders fall this awards season, this could all lead to Wright sliding into that Supporting Actor lineup, and deservedly so.

All of this Oscar-potential talk leads us to Anderson himself, first as the screenwriter. Best Original Screenplay is obviously the category Anderson has had the most success in, nomination-wise. There have been some rumblings about whether the film will end up competing in Best Original or Adapted Screenplay (see the piece from our own Will Mavity for more on that). However, I think the film is still in contention wherever it places (though Best Adapted Screenplay is a smaller field of possibilities and could garner a nomination more likely). It is a very dense text with a lot of moving parts due to its anthology structure. He is obviously a branch favorite and could show up on nomination morning in a similar way Paul Thomas Anderson did for the equally dense but compelling “Inherent Vice” or the Coen Brothers did for “The Ballad of Buster Scruggs” (another anthology film).

Best Director seems much less likely. While Anderson is beloved in the industry, I don’t think the work is undeniable enough or the film beloved enough to crack the Director five. I could see him netting at a significant precursor nomination (maybe BAFTA or DGA), but I don’t foresee him appearing in Best Director for the Oscars. Best Picture is perhaps the biggest question mark of all. Finally, returning to a set of ten nominees this year does help “The French Dispatch” immensely because otherwise, I don’t think it would stand a chance against more revered films in the race. I think the film will do well enough during the precursors to warrant it at least being in the discussion for Best Picture. It may score a BAFTA nomination, a SAG Ensemble nomination, and even the Golden Globes could give it a boost this year should it contend as Comedy/Musical. While it might not be voters’ favorite film of the year, it might have enough pockets of support within the Academy to potentially show up as the ninth or tenth contender, though I do think that it would be a bit of a surprise overall.

The critical divide (or indifference) on “The French Dispatch” has caused many to abandon the film as a serious threat to score many Oscar nominations, but I still think it is being underestimated. I don’t see it taking home a win anywhere, but I do think the film’s charms could work on enough voters, especially those who are already in the camp for anything and everything Wes Anderson will deliver. There are still some contenders that have yet to be seen that could disappoint or not be strong in categories we previously thought, and there are also films that could be divisive amongst the populace. Such a series of events could allow a film like “The French Dispatch” to climb up the ranks and shock us in several categories.

Have you seen “The French Dispatch” yet? If so, what did you think and how many Oscar nominations do you think it will receive? Let us know your thoughts in the comments section down below or on our Twitter account.