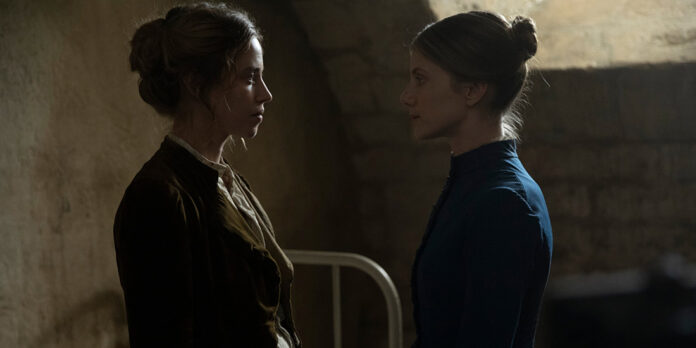 Mélanie Laurent’s “The Mad Women’s Ball” is a searing indictment of how women were treated for mental illness in the 19th century. With elements of a supernatural thriller, it explores the way in which these women, some of whom have been placed in the asylum for their family’s convenience rather than any real problems, are taken advantage of by their doctors and mistreated by their nurses.

Based on the novel, “Le Bal des folles,” by Victoria Mas, Laurent and Christophe Deslandes’s screenplay looks at the life of Eugénie (Lou de Laâge), a young noblewoman with strict parents who don’t appreciate her independent ways or her desire to see more of Paris. Her brother Théophile (Benjamin Voisin) is more indulgent and even reluctantly takes her to Montmartre. The beginning of the film feels like the start of a more average period drama, centered around a young girl who wants more from life, with the dark dreariness of their family home contrasted with the brighter streets of Paris. However, Eugénie is not the usual upper-class lady – she sees spirits, and they speak to her. This gift (if you can call it that) causes her to experience partial seizure-like episodes. Her brother is understandably concerned for her, but the real trouble is caused when her grandmother and parents find out.

Interestingly, Laurent chooses not to show us the spirits that speak to Eugénie, leaving us to decide for ourselves if they are real or not. Eugénie is horrified when her gruff father (André Marcon) deposits her at the Pitié-Salpêtrière Hospital, to live in its mental asylum for women. It’s inhabited by women of all ages and various conditions, from “hysteria” to what appears to be down syndrome. The other girls are impressed that Eugénie is a lady, particularly the girl who has the bed next to hers, Louise (Lomane de Dietrich). Louise is clearly based on an actual patient of the hospital, Louise Augustine Gleizes. As we see in the film, she was extensively used as an exhibit dummy by an early neurologist, Dr. Jean-Martin Charcot (Grégoire Bonnet). Some of the nurses in the hospital are cruel, but Laurent’s head nurse Geneviève is kinder than most and knows each female patient personally.

The film is a harsh look at what many women went through in insane asylums during this period and even later. This makes it a brutal movie to watch at times as the women are subjected to measures ranging from bloodletting to ice baths to solitary confinement and are used as test subjects by the doctors. Hysteria was an actual condition that women were diagnosed with, developed mainly in this hospital in Paris, and the treatments for it were often horrific. A trigger warning: The film also features a disturbing scene of sexual assault towards the end.

The best thing about the film is the strong performances. De Laâge is impressive in the lead role, particularly in portraying Eugénie’s physical and mental deterioration throughout the film. De Dietrich is the other standout of the cast, as the longsuffering Louise whose naivete is mixed with an underlying sense of melancholy. The film’s most significant issue is the way in which the script abandons subplots. Early on, Eugénie meets a handsome man in a café in Paris. However, despite the film spending time on this, it never goes anywhere. Similarly, the fact that Eugénie sees spirits only ends up playing a minor role in the climax of the film, and it feels like a strange thing to abandon suddenly. Ultimately, it feels like the script would have benefited from Laurent and Deslandes paring it down.

Though it has some issues, “The Mad Women’s Ball” is a harrowing story about the treatment of women deemed mentally ill in Paris in the 1800s. Layered on top of that story is a touching one of women coming together, as well as one of the supernatural. With beautiful costumes and a mournful score by Asaf Avidan, there is much to appreciate in Laurent’s film. “The Mad Women’s Ball” may not be easy to watch at times and has some flaws, but it’s a thought-provoking look at the ways in which the medical profession has mistreated women.