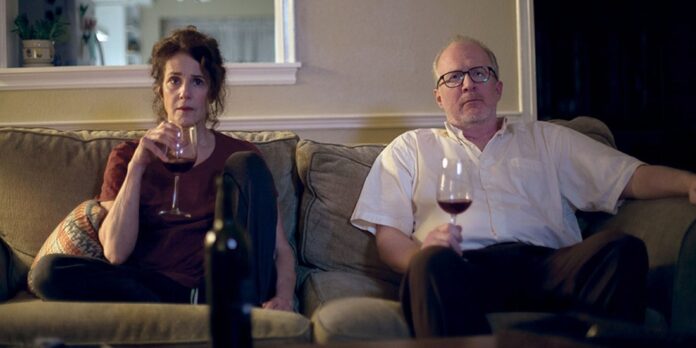 THE STORY – With their marriage on the brink of collapse, two cheating spouses (Debra Winger, Tracy Letts) develop a spark between them that suddenly reignites their passion.

“The Lovers” is a worn premise that suffers from not being able to say anything new amidst the talented acting performances of its ensemble. Tracy Letts and Debra Winger give splendid performances that have to show a lot of internal conflict and complexity, sometimes all with nothing but silence. However, director/writer Azazel Jacobs undoes the film with a botched ending that neither feels earned nor does it make up for the sluggish pacing of the empty narrative that came before it.

Mary (Debra Winger) and Michael (Tracy Letts) have been married for a number of years with one grown son named Joel (Tyler Ross) who is currently in college. It’s evident that the years have not been kind to them as their relationship is strained and lifeless. Mary is seeing another man, a writer named Robert (Aiden Gillen) while Michael is also having an affair but with a dancer named Lucy. Both Lucy and Robert are pushing for Michael and Mary to leave each other respectively. Both individuals plan on separating after spending one final family weekend together with their son and his new girlfriend Erin (Jessica Sula). However, matters become more complicated when Michael and Mary attempt to rekindle their relationship.

While watching “The Lovers,” I was instantly intrigued by the pain and hurt which was being caused by both sides of the marriage/relationship. I was drawn into the lies that were being told, the longing for what their relationship once was and the impact it was having on the two individuals each of them was having an affair with. Azazel Jacobs decides to throw a wrench into the narrative by shifting the focus towards the couple’s son Joel and his relationship with his girlfriend Erin. It may at first appear that the best performances in the film will be delivered by Winger and Letts, but it’s in this third act introduction that Tyler Ross steals the movie right from underneath them as the victimized son who is caught in-between his parent’s issues. He has a breakdown scene towards the end of the film which is incredibly heartbreaking and feels completely authentic in its pain.

Just when you think that director/writer Azazel Jacobs is going to deliver something special with “The Lovers” (Especially after its devastating climax), the film’s concluding moments undo everything that came before, does not make logical sense and sends the audience out on a confusing note wondering how they’re supposed to feel. It’s a questionable decision that is far less impactful than the climax which precedes it. On a bit more of a nitpicking note, the overbearing music by Mandy Hoffman is overbearing and does not often fit the tone of the film well enough to engross the audience. I also found that the story focused too much on Tracy Letts’ character Michael and not enough on Debra Winger’s Mary character to make this feel like an evenly balanced relationship drama.

Azazel Jacobs has not done another film since 2011’s “Terri.” While that film had pieces of comedy and humanity, coupled with a sure hand, “The Lovers” feels at odds with itself. It’s supposed to be a middle-aged drama/comedy with commentary on modern day relationships. Even though the story beats may feel familiar, one believes that the film’s performances will help carry the film over to a firm recommendation. Instead, “The Lovers” crumbles beneath Azazel’s direction, pacing and a questionable ending that undoes everything he was carefully trying to build before it, even if that did not measure up to much in the end anyways.