“THE GIRL WITH ALL THE GIFTS” 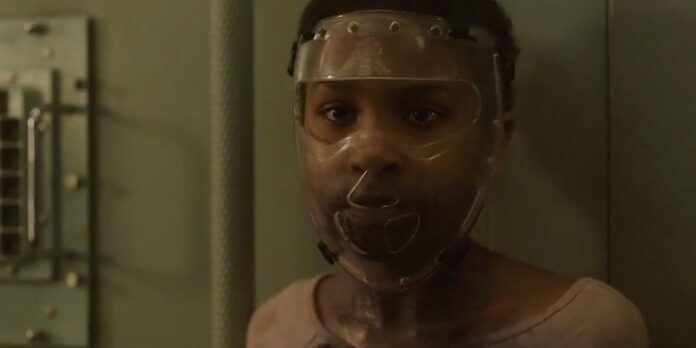 THE STORY – In the future, a strange fungus has changed nearly everyone into a thoughtless, flesh-eating monster. When a scientist and a teacher find a girl who seems to be immune to the fungus, they all begin a journey to save humanity.

​Colm McCarthy’s post-apocalyptic zombie story, “The Girl With All The Gifts” is at once terrifying, humanistic, atmospheric and fully entertaining. This little British film is easily one of my favorites of the year, mostly because the zombie genre is one that has been done to death by so many filmmakers and not in an ingenious or creative way. The script by M.R. Carey presents an intriguing premise that keeps you fully on edge and invested, immersing you into this world that has been practically lost to the zombie infection. Bolstered by solid performances and a story that keeps evolving, “The Girl With All The Gifts” is certainly worth seeking out.

Young children are being held in restraints and put in classrooms to learn from a teacher named Helen Justineau (Gemma Arterton). Afterward, they are brought back to their cells under heavy military guard and kept in isolation until the next day. One of these students is named Melanie (Sennia Nanua) and she is unique in that she happens to be a bloodthirsty “zombie” when she gets a sense of human DNA (Either blood or saliva). Otherwise, she is a tempered, inquisitive and bright young girl who develops a strong relationship with Justineau while some of the guards, led by Sgt. Eddie Parks (Paddy Considine) are not fooled by her polite and innocent personality. Melanie feels alive and humanlike, much to the dismay of Dr. Caroline Caldwell (Glen Close) who sees Melanie as the key to humanity’s salvation from the zombie infection which has managed to wipe out most of the world. Before undergoing a procedure that would kill her but create a vaccine that could stop the infection, the military base is attacked by a zombie horde, which sends Melanie, Caldwell, Justineau and Parks out on their own to regroup with another military base so that humanity may survive another day.

The first thing that immediately jumps out at you while watching “The Girl With All The Gifts” is the premise itself. Seeing seemingly innocent children being treated as anything less than human is disturbing and haunting. It’s all the more unsettling due to Melanie’s politeness which she shows towards everyone at the base camp. Even Sergeant Eddie Parks, who has a personal hatred towards the infected, she manages to treat with respect. McCarthy’s film is mature in how it handles Melanie’s relationship towards the human characters, in that the more humans interact with Melanie, the more they begin to face internal conflict on what to do with her. She is truly special in that she holds the possible cure for the infection that can save humanity but she’s also special because she’s given life by actress Sennia Nanua. Nanua is thoughtful, vicious, tender and impressive in the lead role as Melanie. Paddy Considine, Gemma Arterton and Glen Close are also strong in their roles but it’s Nanua who will leave a lasting impression on you.

Bleak in its depiction of a world torn apart by the infected, cinematographer Simon Dennis gives the film a brown and washed out look that feels like the world has had the life sucked out of it. The music by Cristobal Tapia de Veer is eerie and reminds me of something Jóhann Jóhannsson would have composed for “Arrival” with its unique vocals and atmospheric sounds. The film may lag a bit in the middle section as the characters are making their way through the city but M.R. Carey keeps the central focus on Melanie and all of the other character’s relationships with her.

We have gotten many zombie films through the years. Some follow the same storytelling formula to an exact science. “The Girl With All The Gifts” plays around with its genre conventions and truly surprises in how smart and harsh it can be, much like the character Melanie herself. It may not be a straight up, jump scare, horror film, but what it offers instead is a thinking man’s sci-fi/horror film, one that will have you pondering its imagery and themes for days.