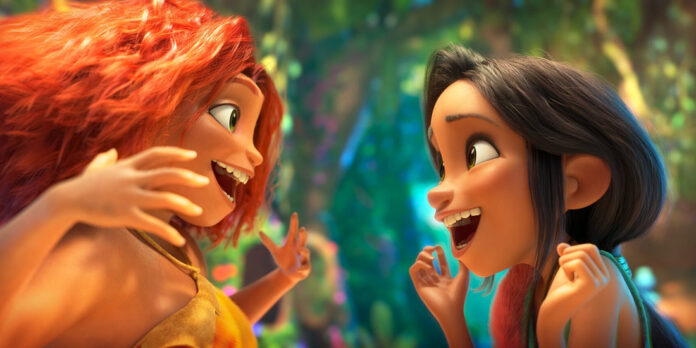 THE STORY – Searching for a safer habitat, the prehistoric Crood family discovers an idyllic, walled-in paradise that meets all of its needs. Unfortunately, they must also learn to live with the Bettermans — a family that’s a couple of steps above the Croods on the evolutionary ladder. As tensions between the new neighbors start to rise, a new threat soon propels both clans on an epic adventure that forces them to embrace their differences, draw strength from one another, and survive together.

​​​​​Way back in the distant year of 2013, DreamWorks released their animated film “The Croods”. It received decent reviews and was a consistent nominee for Best Animated Feature at nearly every awards show. I found it to be an unexpectedly charming and straightforward story of a family that may live in a world well before our time, but still learn lessons of trust and growth that are timeless. So, it’s somewhat odd that it’s taken seven years for a sequel to be made. What’s even more surprising is that, even with the time that has passed between the two films, the filmmakers couldn’t come up with a story that imparts a vastly different moral than the first film.

“The Croods: A New Age” picks up quickly after the events of the first animated romp. The titular cave family has brought a new member named Guy (Ryan Reynolds) into their ranks, stirring the affection of elder daughter Eep (Emma Stone) and the suspicion of patriarch Grug (Nicolas Cage). In their newly nomadic lifestyle, they stumble upon the walled-in home of the Bettermans (Peter Dinklage and Leslie Mann) – a family who claims to be more advanced than the Croods. They seem particularly interested in bringing together Guy and their daughter Dawn (Kelly Marie Tran). Conflicts ensue, heads butt, alliances are made and broken, and it’s up to the two families to reconcile their differences in order to live in harmony.

The family arrives fairly quickly at the Betterman’s, and unfortunately, they are stuck there for a good portion of the film. It’s a bit of a let down after the film’s exciting opening sequence. We are reintroduced to the Croods in a dynamic, action-packed set piece that serves as opening credits, recap, and exposition. And much like the first film, it’s colorful and fun, which makes it such a shame when this frenetic energy is put on the back burner once the family arrives at the Betterman homestead. Because the characters are stuck in this isolated compound, the pace slows down severely and the film gets much more talkative. I can easily see kids getting restless during this part of the film, which takes up maybe half of its runtime.

When the film’s momentum does pick up, it quickly becomes clear that this sequel is leading towards a conclusion that was already reached in the first film. While the circumstances might be different, this is ultimately a parable about overprotective parents who must allow their children to make their own mistakes. There are smaller additional lessons about finding harmony with people different from yourself and living in harmony with the world around you, but again, the first film makes similar observations.

When its pace isn’t hindered by the characters being trapped in one place for too long, the action, character designs, and general look of the film do echo the highlights of the first. Particularly fun is a moment in the film’s inevitable final battle that calls to mind early morning cartoons of the ’80s and ’90s. The movie is bookended by kinetic, inventive opening and closing sequences, which makes it unfortunate that there’s such a dip in energy in the middle.

The film’s moments of joy have the unintended effect of underlining and illuminating its duller parts. It lacks the simple charm of its predecessor. While kids may perk up at certain exciting segments, I can’t recommend “The Croods: A New Age” as being worth venturing to a theater with the whole family in a pandemic-soaked world.