“THE CORRIDORS OF POWER” 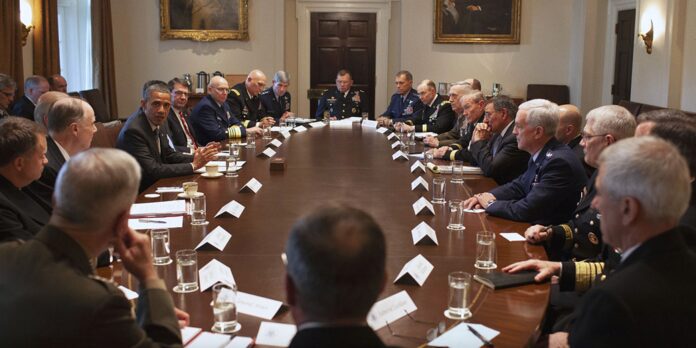 THE STORY – A riveting examination of how American leaders have responded to reports of genocide, war crimes and mass atrocities after the fall of the Soviet Union, when America stood as the only global superpower.

Dark chapters of world history can be ugly topics to explore, but they are necessary in order to unearth an important truth. These events can be catastrophic and exceptionally cruel, but it is vital to look back on tragedies of the past to ensure they never happen again. Unfortunately, such patterns are often not disrupted, and it can only take a minimal effort to restart a horrific cycle that endangers countless lives. “The Corridors of Power” takes a peek into a series of destructive events that easily restart through a series of high-level failures and inaction. It’s a visceral portrait that can be captivating but whose commentary is often pedestrian.

The subject of discussion is the global response to the acts of genocide that have been witnessed, particularly in the aftermath of the Holocaust, when sentiment seemed to suggest that any involvement in such heinous acts would never be allowed to transpire once again. However, stagnation and hollow gestures have allowed this horrible repetition to occur. From the slaughters in Bosnia to Rwanda to Iraq to Syria, a detailed account is taken from members working at high levels of the American government as to what their response entailed. It’s a long line of broken promises, low priorities, and failed administrative objectives that continuously leave people suffering with no intervention.

Dror Moreh clearly has an affinity for analyzing complicated actions by the governments of nations and their impact on a large scale, as “The Human Factor” and Oscar-nominated “The Gatekeepers” can attest. His approach to assembling a documentary remains the same, collecting a series of talking heads that are often juxtaposed against photoshopped images to heighten the storytelling. The effectiveness of such a technique is often dependent on the storyteller, but it can be a compelling method. However, another element featured here is a video that showcases so much of the violent brutality that occurred. Very little of this footage is censored, and while it’s obviously here to remind the audience of the real dangers that were present, it’s difficult not to see these events be sensationalized. It may be unintentional, but an overbearing sound design meant to capture a more cinematic tone to these images betrays the authenticity.

Even beyond the depictions of war crimes, the narrative itself struggles to present a cohesive argument. The thesis at first emphasizes the inadequate response major countries undertook to prevent these actions, whether due to political reasoning or downright racial injustices. Yet this through-line is not cleanly organized, often jumping around and muddling the thematic connections. The subject of the invasion of Iraq in 2003, while monumental, feels tangential to the established commentary. The arguments from the interviewees, some of them rather dubious participants, eventually become repetitive and tedious. A powerful argument is undoubtedly being made at the core, and there is a fascinating journey to track as cynicism and complacency fuel such conflicts. However, the examination is messy in its execution, making it challenging to become fully invested in the lengthy runtime.

The discourse at the center of “The Corridors of Power” is vital to dissect. It is tremendously essential that such lessons of history be revisited and the continual failings brought upon by world powers be interrogated. However, just because the cause is noble doesn’t automatically make for engaging results. While the arguments can be compelling, the presentation leaves much to be desired. The observations grow laborious after a certain point, and the attempts to liven up the atmosphere with graphic footage from the time just come across in poor taste. The intention may be admirable, but the final product is overbearing and lacks an engrossing framework.

<b>THE GOOD - </b>The important subject matter is worthy of discussion, and the central commentary can be compelling.<br><br> <b>THE BAD - </b>The presentation is often tedious to endure, with a repetitive analysis and a muddled assembly of the narrative. Some of the depictions of real-world violence can come across in poor taste.<br><br> <b>THE OSCAR PROSPECTS - </b><a href="/oscar-predictions-best-documentary-feature/">Best Documentary Feature</a><br><br> <b>THE FINAL SCORE - </b>5/10<br><br>"THE CORRIDORS OF POWER"