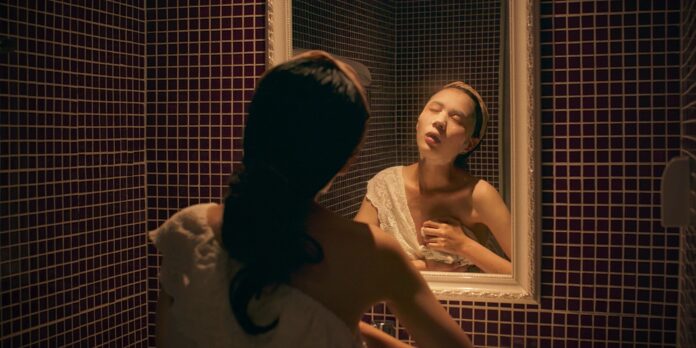 THE STORY – When Lynn discovers that she is pregnant, finishing her studies as a flight attendant are in doubt, not wanting to have an abortion and hide her pregnancy from her absent boyfriend, Lynn hopes to give the child away at birth.

Lynn (Yao Honggui), 20, is at a crossroads. Her boyfriend is an aspiring “influencer,” plugging his MC gigs on Tik Tok and leaning heavily on Lynn to apply herself as well. She reluctantly agrees to attend flight attendant school and takes English lessons (paid by him) to make herself more “marketable.” But she has little interest in such ambitious goals that others have set for her and instead spends her days scrolling through her phone or working at occasional pick-up jobs dressed as a princess for a jewelry store promotion.

Tales of Gen Z ennui have become an increasing staple in novels and on streaming series, but most of these stories’ lethargy centers on twenty-somethings in Western cultures. With their new film “Stonewalling,” directors Huang Ji and Ryûji Otsuka turn their cameras on young people in China who are beginning to grapple with what the directors call a “post-Tik Tok” culture that leaves many Gen Zers directionless. Young Chinese women, in particular, are also burdened with the aftermath of China’s one-child policy, which ended in 2021 but carried with it a stigma to motherhood that lingers to this day.

With that (and her dire financial straits) in mind, Lynn becomes intrigued by the idea of selling her eggs. But while undergoing a rigorous series of acceptance interviews, she discovers to her dismay, that she herself is pregnant. Emotionally abandoned by her boyfriend, Lynn decides against having an abortion and instead chooses to carry the baby to term, at which time she’ll offer it up for adoption. At least it would give her something to do and perhaps snap her out of her lethargy. Lynn returns home to her parents (played by co-director Ji’s own parents, Xiaoxiong Huang and Zilong Xiao), who run a sketchy women’s clinic that has seen better days. To supplement her income, her mother makes some extra cash promoting a miracle cream in a classic pyramid scheme. Worse, she is being financially threatened by another family thanks to a childbirth gone wrong for which she was responsible. Her dilemma snaps Lynn out of her lethargy when she sees a chance to use the baby she’s carrying as a tool to make things right.

In their prior films, Ji and Otsuka, a husband-and-wife filmmaking team, focused primarily on the lives of young people in search of their place in an ever-changing China. With “Stonewalling,” they up the ante, setting Lynn’s plight amid a world where even the most natural parts of life — such as motherhood — are treated as a commodity, something to be bought and sold for the best price.

The biggest challenge facing the filmmakers here is their decision to focus on a character who is sleepwalking through her life. Ennui is not exactly a compelling subject for a film that runs nearly two and a half hours long, and while Honggui thoroughly brings a believability to Lynn, the leisurely pace at which her story is told works against significant audience engagement. Yet, “Stonewalling” never completely loses us because even if Lynn doesn’t see the big picture of where she fits into modern Chinese society, Ji and Otsuka do, bringing a fresh eye as they tackle a familiar subject — coping with societal change — and insightfully telling it with a distinctly modern twist.

<b>THE GOOD - </b>Directors Huang Ji and Ryûji Otsuka offer a fresh take on a familiar topic -- coping with societal change -- in their look at the challenges young women face in finding direction in "a post-Tik Tok" China.<br><br> <b>THE BAD - </b>The difficulty in dramatizing Gen Z ennui is the risk that the film will be equally listless as well, a gamble that the 2 1/2 hour "Stonewalling" never quite overcomes.<br><br> <b>THE OSCAR PROSPECTS - </b>None<br><br> <b>THE FINAL SCORE - </b>6/10<br><br>"STONEWALLING"