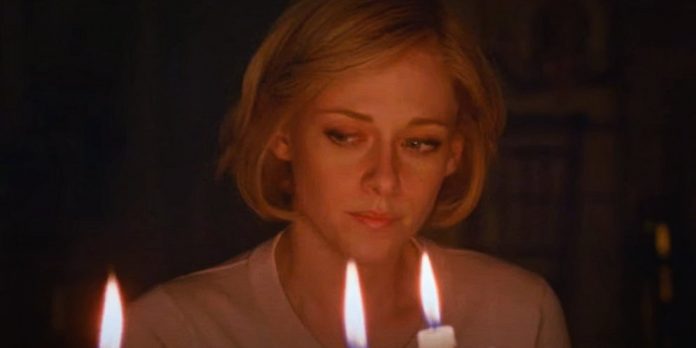 ​Since “Spencer” premiered at Venice, Kristen Stewart has been at the top of many if not all the charts for Best Actress. With “Spencer” now set to screen for general audiences starting November 5th, those charts may not budge for a while, if at all, for the rest of the season. After last year was the closest and most suspenseful Best Actress race in ages, this year is expected to be the exact opposite, assuming Stewart hasn’t locked it up already.

Yet for those like Jessica Chastain, Penelope Cruz, Olivia Colman, Frances McDormand, Lady Gaga, Jennifer Hudson, and other challengers we can’t see coming yet, their best chance to find a crack in Stewart’s armor might not come from her, but from “Spencer” itself. Because while Stewart is at least considered a mortal lock to get nominated, “Spencer” is far less of a lock to get into Best Picture – and therein might lie the best chance to make Best Actress somewhat of a race.

“Spencer” has won its share of raves even beyond Stewart, but critics and Academy voters are two different demographics. Stewart might be undeniable for both groups, yet “Spencer” as a whole is suspected to be too odd, surreal, and unconventional for a lot of Best Picture voters to embrace. After all, Pablo Larrain’s last highly experimental biopic about a legendary woman surrounded by tragedy didn’t crack Best Picture in 2016. Then once “Jackie” faded, so did Natalie Portman’s chances of beating Emma Stone in Best Actress.

Like Stewart, Portman was the early Best Actress favorite after the festivals, even with Stone right on her heels. Yet as “La La Land” continued to storm through the season, Stone was carried over with it, as Portman dropped from frontrunner to mere nominee. By the end, Isabelle Huppert was the biggest threat to Stone while Portman settled for the nomination, and “Jackie” was otherwise shut out of the major categories. Portman was a past winner playing an American icon, yet “Jackie” was ultimately too divisive with the Academy to keep her in front, especially against contenders from bigger movies. Five years later, the word is that “Spencer” is even more experimental and perhaps cold for traditional voters. Yet so far, that hasn’t dented Stewart’s narrative as an inevitable frontrunner if not the inevitable winner. However, she would be a first-time nominee facing several past nominees and winners like Chastain, Gaga, Cruz, Colman, Hudson, McDormand, and maybe even Rooney Mara or Jennifer Lawrence.

With that in mind, if Stewart is the heavy favorite even with “Spencer” on the Best Picture bubble, then there really would be no stopping her if it got in. Since Best Picture is a field of 10 again, and there aren’t that many formidable critical darlings to deal with yet, there’s still a conceivable path for “Spencer” to squeeze into the top 10. Should it perform well with audiences beyond critics and online pundits this month, it can only help its case further. And if that case is strong enough by nomination morning, then a “Spencer” Best Picture nom will make just about everyone declare Stewart the Best Actress winner that day if they hadn’t done so by then already. Clearly, any other contender, or anyone who wants some level of suspense in Best Actress, will need to pull for a “Spencer” Best Picture snub. There’s still a strong chance that might not be enough to unseat Stewart, but it would certainly give them a better chance than the alternative. Then again, if any acting category isn’t dependent on its nominees being in Best Picture films, it is Best Actress.

Since the preferential ballot era began, Best Actress has had the most acting winners who weren’t in Best Picture nominees, like Meryl Streep in 2011, Cate Blanchett in 2013, Julianne Moore in 2014, and Renee Zellweger in 2019. In contrast, there’s only been one Best Actor winner who wasn’t in a Best Picture nominee, and that was Jeff Bridges way back in 2009 when he couldn’t be denied anymore, even for a non-nominee like “Crazy Heart.” With that historical context, it should look fairly easy for Stewart to win, no matter if “Spencer” makes the cut or not. Yet those other winners had special circumstances in their favor that Stewart doesn’t. Zellweger was playing an entertainment icon in the more conventional biopic “Judy” and also had a “comeback” narrative in her favor 16 years after her first Oscar win. Moore was long overdue and unstoppable when she won for the otherwise ignored “Still Alice.” Blanchett was a past winner and was the last person praised for being in a Woody Allen film with ‘Blue Jasmine.” And Streep was immune to bad reviews for her own conventional, prosthetics-heavy biopic in “The Iron Lady.” In contrast, Stewart’s transformation is mainly emotional in a very different kind of biopic, and she doesn’t have past wins or nominations to benefit her narrative. However, she is overdue in a way, after almost 20 years of intense on and off-screen ups and downs.

One can also cite very recent evidence that a Best Picture snub does make a difference. Viola Davis looked to be surging late in last year’s intense three-way race with Frances McDormand and Carey Mulligan. But when McDormand won and became the first Best Actress winner from a Best Picture winner in 16 years for “Nomadland,” it showed that Davis was indeed affected by “Ma Rainey’s Black Bottom” getting snubbed in Best Picture – and so was Chadwick Boseman, as it turned out. Of course, there are likely any number of theories why Davis would take a bigger hit for her film being snubbed, while Stewart might be safer no matter what. Last year McDormand had the Best Picture winner to give her a final boost, but that is in no way likely to be a factor this year. In fact, if “Spencer” doesn’t make the field, there’s still a better than zero chance that no Best Actress nominees at all might be from Best Picture films, or maybe only one would at best. Chastain’s “The Eyes of Tammy Faye” and Hudson’s “Respect” likely won’t come near the cut, while Cruz’s “Parallel Mothers” won’t even crack the Best International Film category. Colman’s “The Lost Daughter” needs some help to rise in Netflix’s award season pecking order, McDormand’s “The Tragedy of Macbeth” is on various bubbles, and Gaga’s “House of Gucci,” Mara’s “Nightmare Alley,” Lawrence’s “Don’t Look Up,” Rachel Zegler’s “West Side Story” and Alana Haim’s “Licorice Pizza” are all mysteries right now.

Stewart may be in a real no-lose position, as she might not have any challengers from serious Best Picture threats, or she could be the only nominee from one. Nonetheless, if “Spencer” doesn’t make it in, it would put her on equal footing in one way with most of her competition. That might be the only glimmer of hope for anyone to catch her, but at least it would be a glimmer. And if that glimmer shows “Spencer” is more divisive with the Academy than it is with critics and pundits after all, then maybe there is hope for a past winner like Cruz, Colman, Hudson, or McDormand, someone with a more traditional biopic like Chastain, or someone who could be from a more prominent overall contender like Gaga, Zegler, Haim, Mara or Lawrence.

Perhaps the more likely outcome is that none of this will make a difference either way. Perhaps with the prospect of several above-the-line categories looking largely settled already, many of us will look for any excuse to drum up some suspense, real or imagined, until March 2022. Perhaps such exercises are just a way to kill time until outcomes that most predicted back in early September come true after all. And perhaps once more viewers get to see Stewart and “Spencer,” and once the critic awards circuit revs up, there really will be nothing and no one in Stewart’s way by the time the industry at large weighs in. And depending on one’s viewpoint, maybe no one should be. But suppose someone is rooting for another challenger, or at least not rooting for a season-long Best Actress coronation…In that case, their best bet may be to hope “Spencer” stumbles among general audiences and voters, on the off chance it signals trouble ahead for Stewart as well. Because if it doesn’t stumble and finds its way into the Best Picture field, despite not being a traditional Academy cup of tea, then there would be almost no hope left that Stewart won’t be an even stronger cup of tea for them too. Even if such hope remains after nomination morning, it may yet be a fool’s hope as Stewart could still easily overcome her own movie’s snubs, like Zellweger, Streep, Blanchett, and Stewart’s own “Still Alice” mother Moore before her. Yet the field at large would be far better off taking that chance than having it closed off completely, regardless of how slim their own chances might remain anyway.

Have you seen “Spencer” yet? If so, what did you think? Do you think it will be nominated or snubbed for Best Picture? How do you think this will effect Kristen Stewart? Check out the NBP team’s latest Oscar predictions here. Let us know your thoughts in the comments section below or on our Twitter account.