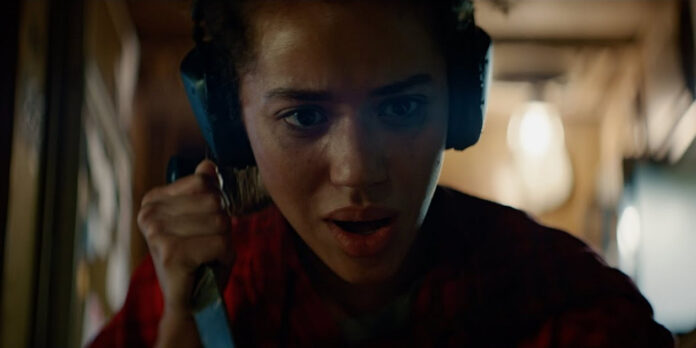 THE STORY – A young girl recovers her hearing and gains synesthetic abilities during the brutal murder of her family. Finding solace in the sounds of bodily harm, as an adult, she pursues a career in music composing her masterpiece through gruesome murders.
​
THE CAST – Jasmin Savoy Brown, Lili Simmons, James Jagger & Tessa Munro

​”Sound of Violence” gets all the credit in the world for being bold. It has uniquely gory scenes, which is a tough thing to come by in a world of “Saw” sequels and Blumhouse productions. However, the downside to this is goriness can only go so far before it veers into campiness. The more elaborate means of death, the closer a film gets to being unintentionally funny. “Sound of Violence” doesn’t bother safeguarding against this risk, and the results are predictably mixed.

The film offers up an intriguing premise. Alexis Reeves lost her hearing at a young age, but she manages to recover it during the brutal murder of her family. Once she matures into an adult, Alexis (Jasmin Savoy Brown) realizes she finds solace in the sounds of bodily harm and begins to integrate human suffering into her career as a music composer. She enlists the aid of her roommate Marie (Lili Simmons), but the further Alexis goes in the pursuit of her art, the less safe those around her become.

The sound design is impeccable throughout, constantly teasing the return of Alexis’s deafness. A doctor tells her that the slightest change can affect her hearing and the film often drops us into the silence with her so that we can share in her panic. It communicates the stakes in a creative manner and bonds us with Alexis before she goes on her not-so-admirable killing spree.

The first murder scene is right out of the Jigsaw playbook, with a victim tied to a chair and a sledgehammer slowly caving in his school. It’s brutal, of course, but director Alex Noyer does a superb job of shifting the focus away from the violence and towards the beauty that Alexis is hearing. She’s in a complete state of euphoria as the victim’s skill turns to mush, and it’s here that the central premise seems just crazy enough to work.
​
Frustratingly, the film takes a downward turn with the second murder. Alexis brings a singer in to record some vocal lines, but she winds up electrocuting him so gravely that his head explodes. In a vacuum, this sounds like a bold, albeit chilling, scene. The way it’s executed leaves much to be desired, however. The singer’s decision to keep humming through the electric charges is bad enough (he sounds like he turned the autotune up to 11), but the cutaway shots of Alexis jamming out on the MPC is too absurd to take straight. “Sound of Violence” never fully recovers from this high piercing note of a scene.

The gruesome deaths continue with a sinister contraption tied to a speaker and a woman driven to play the harp until her fingers snap off. I once again have to praise Noyer for his creative ways of dispatching characters, but these scenes feel so out of groove with the rest of the film that it sometimes feels unintentional. “Sound of Violence” also runs into the problem of decreasing narrative stakes. The first few times Alexis commits murder, the viewer is shocked, but by the fourth time, it feels old hat. Nothing changes in terms of her motivation, so we’re left with a series of incongruous death/dance scenes.

If the oddities of “Sound of Violence” grab you, I say go into the film expecting to have a forgettably fun time. If you want something more out of a serial killer flick, I suggest you keep looking.

Powered by JustWatch
Share
Facebook
Twitter
Copy URL
Previous article
“wework: or the making & breaking of a $47 billion unicorn”
Next article
The Next Best Picture Podcast – “The Courier”