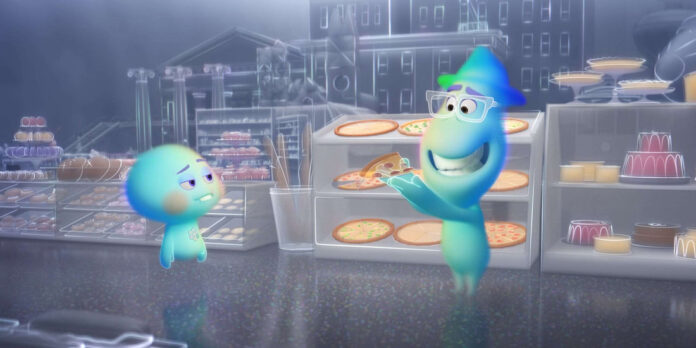 THE STORY – Joe is a middle-school band teacher whose life hasn’t quite gone the way he expected. His true passion is jazz — and he’s good. But when he travels to another realm to help someone find their passion, he soon discovers what it means to have soul.
​
THE CAST – Jamie Foxx, Tina Fey, Questlove, Phylicia Rashad, Daveed Diggs & Angela Bassett

Why am I here? What am I meant to do? Most of us have asked these big questions and maybe a few of us have a good answer for them. For me, “Soul” landed at just the right moment to bring a new perspective to those questions. And let me tell you, exploring the meaning of life has never been so cute. In true Pixar fashion, “Soul” tackles huge existential questions while remaining accessible for a family audience. All ages can enjoy this film, but it’s sure to land differently for the adults who have wrestled with their purpose.

Joe (Jamie Foxx) is a middle school band teacher who dreams of more. He’s dreamt of playing jazz professionally for most of his life. The problem is: Joe’s not young anymore. He’s middle-aged and the chances for him to create a new career are few and far between. When a former student calls about an opportunity to play piano with the Dorothea Williams Quartet, Joe sees it as his big break. He nails the audition and gets the gig, but before he even gets the chance to celebrate, he falls down an open manhole to his death. Well, more specifically, we see Joe’s soul land in the gateway to the Great Beyond.

But Joe isn’t done living. He isn’t ready to accept this fate. He makes a break for it, and eventually finds his way to the Great Before, the place where souls are developed before being sent to earth. Here, he is paired with soul number 22 (Tina Fey) as they attempt to get Joe’s soul back to his body. The rest of their journey is best left unspoiled.

As expected, the animation throughout “Soul” is some of Pixar’s best yet. Taking place in both the real world of New York City as well as the Great Before, the film features stunning realistic animation that accentuates the real world so well, while also creating something brand new. There are moments, particularly when Joe falls into the Great Before, that will stand as some of the best sequences of animation in a Pixar film. Paired with a remarkable score from Trent Reznor & Atticus Ross, this entire movie is a lot of fun on the surface alone.

The script from Pete Docter, Kemp Powers and Mike Jones is poignant and gentle. Docter and Powers also directed the film with a steady hand, never letting the otherworldly elements overshadow the humanity in the story. While there’s plenty of zany action, including talking animals and a body swap, “Soul” is one of Pixar’s quietest, most contemplative, and gentle films. While Joe’s struggles are so different from mine personally, the desires are universal. He’s looking for purpose. He’s full of unfulfilled artistic expression. He wants to be somebody.

Needless to say, these are hard questions to tackle, and I would never expect a 100-minute animated film to give some easy answers. It would’ve been easy, however, for the film to cop out and give some generic “chase your dreams” inspirational sort of speech. Instead, “Soul” leans into reality and lets Joe find his own answers through conversations and realizations. Along with Joe, I was finding answers to questions I didn’t know I needed.

Docter’s previous film, “Inside Out,” gave families a new language to talk to their kids about emotions. While “Soul” doesn’t give the same simple tools to talk about purpose, it does give enough to ask some great questions.

“Soul” has all the elements we know and love from Pixar: the incredible animation, a great story and something for both kids and adults. Yet, there’s something that feels different about this one. While the filmmakers had no idea what sort of year 2020 would turn out to be, “Soul” is perfectly placed to help so many of us cope with the disappointments or lack of fulfillment this year has brought.

“Soul” is a delightful and happy movie. And for anyone who has questioned why you’re here, this will pack an emotional punch.