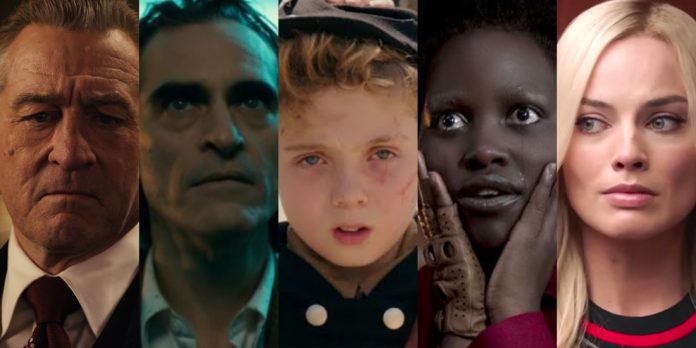 TAKEAWAY – Jojo Rabbit is on Shaky Ground
With big nominations for Best Flim – Musical/Comedy, Best Actor – Musical/Comedy (Roman Griffin Davis), we can’t say it’s a bad morning for “Jojo Rabbit.” Still, missing a Screenplay nomination isn’t great, considering many believe that to be the film’s greatest strength. Of course, the Oscars have two separate categories for screenplay compared to the Globes’ one, so there will be more room to break in. Additionally, though not as surprising, Scarlett Johannson missed out on a second nomination this morning in Supporting Actress.

SURPRISE – Annette Bening in Supporting Actress
Johannson was pushed out by someone we may be underestimating. In way-too-early predictions, many of us believed that Annette Bening playing Senator Diane Feinstein would be a lock for an overdue Oscar win, yet the season has gone in a different direction. Many predicted that she would be left off of this list, as the understated “The Report” hasn’t taken off well. Still, Bening broke into Best Supporting Actress this morning, likely pushing out a second nomination for Scarlet Johannson (for “Jojo Rabbit“).

TAKEAWAY – Bombshell Didn’t Get The Boost It Needed
With its two nominations this morning for Actress – Drama (Charlize Theron) and Supporting Actress (Margot Robbie), “Bombshell” may have solidified its place there, but couldn’t get a foot in anywhere else. The film is clearly in the “Vice” mold, which over-performed at the Globes last year on its way to over-performing at the Oscar nominations. “Bombshell” needed a boost like that, or at least another nomination…anywhere. Though the Oscars have a wider Best Picture lineup, they need to keep the conversation alive.

SNUBS – Musical/Comedy Categories
Two notable films were left off the Best Film – Musical or Comedy categories that could’ve used a boost. “Cats,” Tom Hooper’s gift to Film Twitter, seemed like, ehem, catnip to the HFPA, but only scored one nomination: Original Song (Beautiful Ghosts). Look, no one is expecting much awards traction from “Cats,” but there’s an entire category for Musicals here. Additionally, though it was a long shot, “Booksmart” walked away with a lone nomination for Beanie Feldstein in Best Actress, but not an overall Film nomination. Though it’s not hugely surprising, it’s disappointing.

​SNUBS – Is There Hope for Lupita, Sandler, or Dafoe?
Three favorites who have been racking up critics’ nominations were left off the list this morning: Lupita Nyong’o, Adam Sandler, and Willem Dafoe. All three have been hovering around the predictions in their respective categories and really need some boosts to stay in the game. Lupita currently leads the nomination and win count for the critics’ awards, while Sandler and “Uncut Gems” have been over-performing. The HFPA ruled “Uncut Gems” a drama (rightfully), and Sandler couldn’t break in. All three of these actors have enough precursors that the road isn’t over for them, but SAG could be their last hope. If any of them don’t make it into the SAG lineup this week, it would be wise to remove them from predictions.

TAKEAWAY – Solid Best Actress Lineup
Is this our Oscar Best Actress lineup? Best Actress – Drama was one of the easier categories to predict this morning. Are we in for any surprises? Four of the women seem to have scored nominations everywhere, feeling closer to locks: Zellweger, Johannson, Ronan, and Theron. While Cynthia Erivo snagged the fifth spot, her film didn’t receive as strong of reviews, leaving her a little more vulnerable. Still, it’s a clearly Oscar-friendly role, and she could very well land a nomination. If Lupita doesn’t catch on with the televised awards, Awkwafina could snag that last spot instead. She scored an Actress – Musical/Comedy nomination this morning, and could actually win. “The Farewell” is a critical darling, and it’s A24’s best shot this year. They’ll push hard for her to break in.

OTHER TAKEAWAYS – Hustlers, Animated, and More

​
With the Academy Awards coming sooner than normal, on February 9th, this shortened season likely has many more surprises in store. How influential will the Globes be this year, with less time to change the shape of the race? SAG Nominations arrive this week, and the race will continue to shape up as we search for our Next Best Picture.

What were the snubs and surprises for you this morning? Anything we missed? Sound off in the comments or let us know on our Twitter account.