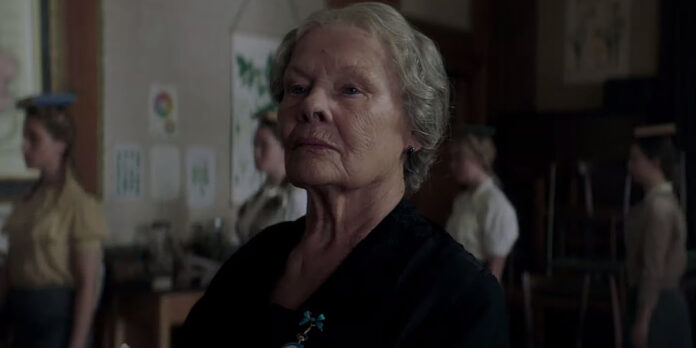 THE STORY – At the dawn of World War II, a desperate Winston Churchill orders his new spy agency to train women for covert operations. Together, these female agents help undermine the Nazi regime in France, leaving an unmistakable legacy in their wake.
​
THE CAST – Eddie Izzard, Judi Dench, James D’Arcy & Jim Broadbent

Augusta Victoria College for Girls was a finishing school for German teenage girls in the English seaside town of Bexhill-on-Sea in the 1930s. But the girls weren’t just anyone; they were mostly daughters of German high society or high-ranking Nazis. At Augusta Victoria, they learned English and deportment, much like any other finishing school. But Germany hoped the school would help build an alliance with Britain and that the girls would marry into English society, potentially even building pro-Nazi sentiment. It was an easy way to gauge danger for the English: as long as the girls remained, they felt safe from the German attack.

This school is the subject of Andy Goddard’s new pre-war drama, “Six Minutes to Midnight.” Eddie Izzard, who is from Bexhill-on-Sea, wrote the script alongside Goddard and Celyn Jones. Izzard was inspired by hearing about the school in his hometown and wanted to explore its history.

The film takes place in 1939, as England is on the brink of war with Germany. Thomas Miller (Izzard) arrives to interview for a school position after the previous teacher has gone missing. The headmistress Miss Rocholl (Judi Dench), hires him for a trial period, and he begins to get to know the girls and the other teacher, Ilse Keller (Carla Juri).

However, all is not as it seems as the former teacher soon turns up dead, and the audience learns that Miller is actually in the British Secret Service. He has been placed at the school to find proof of Nazi involvement. When he does stumble across a plan (perhaps a bit too easily), the film picks up as he goes on the run to avoid run-ins with both the Germans and the British police.

Unfortunately, the film’s greatest downfall is its lack of character development. We never learn much about Miller, Miss Rocholl, Ilse, or Charlie (Jim Broadbent) or fully examine their actions’ motivations. Dench manages to pull off a decently emotional performance nevertheless, while the others are serviceable. The schoolgirls are even less developed, aside from nerdy loner Gretel (Tijan Marei), whose dark hair and glasses make her stand out from the others.

In fact, the lack of emphasis on the schoolgirls themselves is one of the greatest flaws of the movie. Instead of examining the unique position these teenagers were in, wearing school uniforms that sported both the swastika and the British flag, it’s focused on an invented spy narrative. It fails to fully reckon with how the girls feel about why they’ve been sent to school in another country and what their ambitions are.

The overly dramatic score by Marc Streitenfeld tries to build tension and feeling but ultimately fails. The film seems somewhat held back by its scale and is certainly nothing that we haven’t seen before visually, but it has passable production and costume design. The best element is perhaps the beautiful shots of the Welsh countryside where they filmed.

“Six Minutes To Midnight” illuminates a fascinating subject in pre-war Britain but feels focused on the wrong parts of it. If you’re particularly interested in pre-war Britain or just trying to see every mediocre film Judi Dench has been making lately, then it’s worth a watch. It is neither great nor terrible, but somewhere in between.