“SHAUN OF THE DEAD” 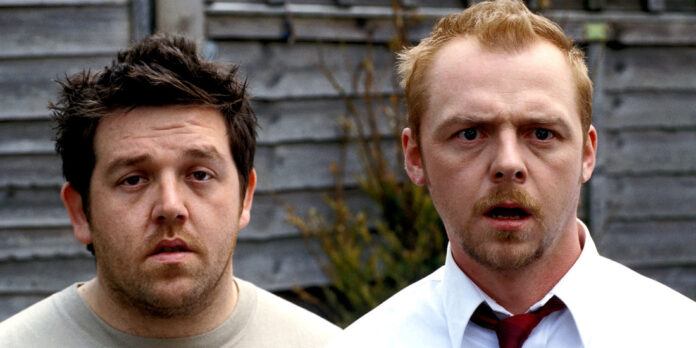 THE STORY – Shaun (Simon Pegg) is a 30-something loser with a dull, easy existence. When he’s not working at the electronics store, he lives with his slovenly best friend, Ed (Nick Frost), in a small flat on the outskirts of London. The only unpredictable element in his life is his girlfriend, Liz (Kate Ashfield), who wishes desperately for Shaun to grow up and be a man. When the town is inexplicably overrun with zombies, Shaun must rise to the occasion and protect both Liz and his mother (Penelope Wilton).
​
THE CAST – Simon Pegg, Nick Frost, Kate Ashfield, Lucy Davis, Dylan Moran & Bill Nighy​

​4/4/2020
By Danilo Castro
​
The best zombie films are the ones that intermingle blood and guts spectacle with clever social metaphor. “Night of the Living Dead” (1968) and “Dawn of the Dead” (1978) take aim at systemic racism and consumerism, respectively, while “28 Days Later” (2002) highlights mankind’s tendency toward self-destruction. Edgar Wright is a staunch traditionalist when it comes to upholding these zombie staples, but his penchant for comedy and postmodernism makes “Shaun of the Dead” (2004) one of the rare films that works as both a genre parody and a genre classic.

Wright ditches the politicized metaphors of the aforementioned titles for something a little more irreverent. The zombies in “Shaun of the Dead” aren’t meant to represent inequality or amorality, but rather, the zombified state that most people resort to when saddled with routine. They’re virtually indistinguishable from the living, which the director conveys through clever framing and editing. The film opens on a sea of dead-eyed Londoners as they shuffle about the streets and mindlessly scan items at the grocery store. Shaun (Simon Pegg), our eponymous slacker, stumbles into his living room while making zombie-like sounds, but a quick pan up from his feet reveals that he’s merely slept in.

Shaun is a thirty-something salesman, capable of more but ineffably tied to his bad habits. His flatmate, Ed (Nick Frost), is a blissful man-child, content with drinking beer and playing video games as long as Shaun is by his side. Both men are on autopilot, so oblivious to the outside that they fail to notice the zombie outbreak taking place around them. In the film’s iconic Steadicam shot, Shaun walks to the corner store and interacts with its patrons, unaware they’ve become undead. He breezes past the bloody handprints on the glass, short-changes the register and even takes time to complain to a zombie he mistakes for a panhandler. It takes so long for Shaun and Ed to put the pieces together that zombies are literally waiting around in their backyard.

The script (written by Wright and Pegg) is staggering in its comedic density. Each shot contains a visual or verbal gag, which is then tucked into an obscure pop culture reference. The rush to disarm a zombie in the backyard becomes a debate about which Prince record is best and which is worth hurling at the head of their intruder. Shaun and Ed also get into an argument about whether or not to call the zombies the “infected,” which is the same term used in “28 Days Later” and which remains a point of contention among genre purists. Some of these gags are so creatively bonkers that they defy categorization. A prime example is a scene where Shaun and Ed get drunk and come across a zombie in the middle of the street. Instead of getting scared or seeking help, they decide to make a song based around the zombie’s well-timed moans.

Wright pulls from a wide range of horror influences here. He showcases a Tarantino-like ability to break down his favorite films and bake them into the DNA of his own work, whether they be familiar titles or forgotten rarities. The whip zooms are a stylistic nod to Sam Raimi’s “Evil Dead” trilogy (there’s also mention of an unseen character named “Ash”), while the infection of Shaun’s mother and the cartoonish gore pay tribute to cult flicks like “Let Sleeping Corpses Lie” (1974) and “Dead Alive” (1993). The trick with any good parody is to make audiences laugh without requiring them to get all of the references, and Wright manages to thread this fine needle without sacrificing his own eclectic tastes. He strikes the perfect balance between accessibility and obscurity.

While my gripes with the film are scarce, they’re present nonetheless. The subplot involving Shaun and his ex-girlfriend (Kate Ashfield) feels like filler, largely because it services themes (maturity, responsibility) that are already present in the dwindling friendship between Shaun and Ed. It’s telling that Wright would reduce the love interest angle in his next release, “Hot Fuzz” (2007). I will also note that the laughs dry up a bit towards the climax, but that’s normal for parody films not made by Zucker, Abrahams and Zucker.

All that said, “Shaun of the Dead” is one of the finest comedies of the past 20 years, with a laundry list of quotable lines and a creative richness that enables one to catch something new with each viewing. Wright’s passion for the zombie genre is evident throughout, but he never sacrifices the plot or the arcs of his main characters for a cheap punchline. Every single aspect of the film feels earned, including its classic status.