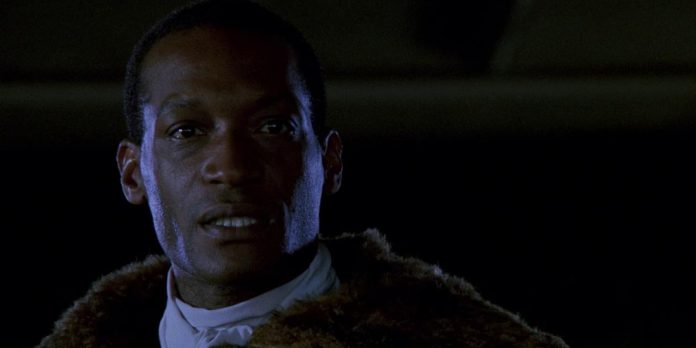 “Candyman” has been on the lips of moviegoers more often than it has been in decades, thanks to Nia DaCosta’s sequel/soft reboot releasing this weekend. Much of the conversation has revolved around the dated aspects of the 1992 original, particularly regarding the “white savior” trope. However, there’s still plenty about the film that’s compelling and worth remembering. With that said, let’s track down a mirror and tempt fate by summoning the film that first bore the name of “Candyman” (studios are going to have to get a little more creative with their reboot titles).

“Candyman” revolves around Helen Lyle (Virginia Madsen), a Chicago semiotics graduate student who stumbles upon the titular character while researching urban myths. Although the alarmingly high body count is said to be the Candyman’s doing, Helen tempts fate by summoning him. She believes that the reputed Cabrini-Green housing project residents are merely using the myth to cope with their hardships. Still, the further she wades into the murky waters of Candyman’s history, the more she comes to believe in him.

Before delving into the complications that Helen’s character poses, I do want to compliment Virginia Madsen’s tour-de-force performance. She’s an actress who continues to shine in numerous supporting roles, but “Candyman” was a rare opportunity for her to take center stage, and she offers up a stellar showcase. Helen’s transformation from a passionate investigator to a paranoid victim is so effective because it splinters the arrogance that her character displayed at the film’s onset. She sees herself as superior to those who believe in Candyman. While this arc is nothing new in the horror genre, Madsen’s increasingly manic delivery (and physical degradation) highlights it as an excellent example.

The arrogance, as mentioned earlier, opens the door to some of the film’s less-than-stellar aspects. Helen is an outsider to the Black community that inhabits Cabrini-Green, and her decision to summon Candyman has a specific adverse effect on these tenants. Candyman begins killing them to taunt Helen, which positions Black victims as little more than pawns in their elaborate chess game. There are several Black characters of agency throughout the film, chief among them Helen’s thesis partner Bernadette (Kasi Lemmons) and Cabrini-Green resident Anne-Marie (Vanessa Williams), but their connection (or lack thereof) to Candyman is ultimately left undeveloped in favor of Helen’s frantic quest.

Structurally, I can understand why writer/director Bernard Rose took this approach. A traditional film hinges on whether the audience can connect with the protagonist. What better way to ensure this connection than by dropping the character into a new environment and forcing them to learn alongside the viewer? Helen fits the classic protagonist checklist, but the racial dynamic of the film repositions her as a “white savior” who saves Anne-Marie’s son and conquers the Candyman single-handedly.

The fact that Anne-Marie’s son Anthony is the protagonist of the new film is an attempt to rectify this retroactive “white savior” reading while maintaining the sturdy foundations of the original. In this regard, the film’s problematic aspects don’t register as pointedly mean-spirited so much as they do antiquated (at best) or unconcerned (at worst).
Aesthetically speaking, “Candyman” has plenty to appreciate. Rose displays a keen eye for imagery throughout the film, particularly in framing the hook-handed ghost. The sparing use of the character results in memorable scenes like the parking lot reveal, where Candyman is kept at a distance and silhouetted against the sunlight. The exchange plays like something out of a nightmare, which is further embellished by the echoing sound design and splice edits. Rose also proves adept at incorporating practical effects, as anyone who’s seen the famous beehive rib cage scene can attest.

Of course, one can’t praise “Candyman” without celebrating the Candyman himself: Tony Todd. The actor absolutely devours the scenery, his malevolent voice ringing out in moments when he isn’t even present. Candyman’s backstory goes a long way to establish him as a tragic figure (he was murdered for having an interracial love affair in the 19th century). Still, the real crux of his appeal comes from Todd, whose quiet menace is both intoxicating and frightening. There’s a deft sophistication that distinguishes him from generic slashers like Jason Vorhees or Leatherface. Todd was the perfect man for the role, and frankly, the only reason to watch the lame “Candyman” sequels that littered the rest of the 90s.

Ultimately, “Candyman” is an entertaining horror film that fails to hold up against today’s social standards. It shouldn’t be praised as a masterpiece, nor should it be castigated for its dated elements; it should merely be appreciated for what it is and used as an inspiration to tell similarly compelling stories with more nuance and diversity. Revisit “Candyman” and reconsider your own stance on the film, though we’d suggest not saying the title too many times aloud. Better safe than sorry.

If you want to continue your “Candyman” binge with Next Best Picture, we suggest checking out our review of the new “Candyman” film and watch out for our podcast review dropping tomorrow. Have you seen the original “Candyman?” Will you be heading to the theater to see Nia DaCosta’s sequel this weekend? Have you seen it already? If so, what did you think? Let us know in the comments section below or on our Twitter account.