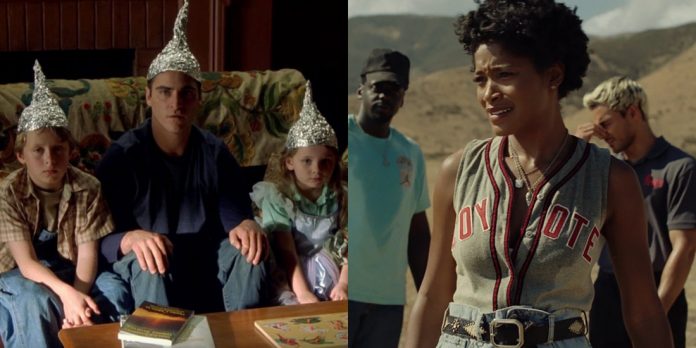 ​The central selling point of “Nope” isn’t its flying saucers, recent Oscar winner Daniel Kaluuya (“Judas And The Black Messiah“), recent Oscar nominee Steven Yeun (“Minari“) or rising star Keke Palmer (“Hustlers“), but writer/director Jordan Peele. In just his third film, Peele is already that rare director to be the biggest and most marketable star of blockbuster movies, after the Oscar-winning success of “Get Out” and his follow-up hit “Us.” In fact, it may be that no director has had this kind of early critical and box office success since M. Night Shyamalan over 20 years ago. In that context, it is all too fitting that Peele’s third film as a headlining director is about a new take on an alien invasion, just like Shyamalan’s was with “Signs.” Yet Peele may want to hope that the similarities end there.

“The Sixth Sense” and “Get Out” both put Shyamalan and Peele into the directorial A-list overnight, with movies that instantly entered pop culture lore for their shocking plot twists and subversions of the horror movie formula. Neither of them was projected as possible Oscar-season movies before their release, especially since “Get Out” was released in early spring and “The Sixth Sense” came out in the usually dead month of August. But their trajectories as both box office hits and award contenders broke the mold, or at least defied it, in equal measure. Both Shyamalan and Peele earned Best Director and Original Screenplay nominations while their films broke into Best Picture, and each got members of their cast nominated as well – Kaluuya for “Get Out” and Haley Joel Osment and Toni Collette for “The Sixth Sense.” Nonetheless, “The Sixth Sense” was shut out in seven categories on Oscar night, though Peele got “Get Out” its only win for Best Original Screenplay. After “The Sixth Sense” and “Get Out” finished their runs, Shyamalan and Peele struck while the iron was hot with highly anticipated follow-ups. However, while both Shyamalan’s “Unbreakable” and Peele’s “Us” had intense hype behind them, their success didn’t quite reach the heights of “The Sixth Sense” or “Get Out” at the box office or in awards season. Even so, a growing number of people eventually regarded “Unbreakable” just as highly as “The Sixth Sense,” as it turned out well ahead of its time in examining the superhero/comic book genre. Likewise, “Us” may well be as appreciated as “Get Out” down the line as well, especially since star Lupita Nyong’o was one of the most high-profile snubs of the 2019 awards season.

After a massive breakout hit and a smaller but still widely respected hit, Shyamalan next turned to the alien invasion genre – just as Peele is doing now. Yet Shyamalan’s “Signs” was a smaller scale invasion movie than most others at the time, with a different perspective and different themes than usual. And while most specific plot details and themes for “Nope” are still under wraps even now, Peele is widely expected to take the same skewered view on the genre, in both scale and whatever larger social and racial themes he is layering in this time.

Instead of focusing on wide-scale destruction in major cities and CGI-driven battles for the planet, “Signs” concentrated on a tiny town family experiencing the world’s potential end while adding commentary on religion, fate, and signs beyond those left in crop circles. With “Nope,” Peele also shows an invasion story through one family, in this case, a brother-sister team who also see signs of alien life in their small community – then set out to make it big by filming proof of it. “Signs” used this formula to become one of the biggest hits of 2002, seemingly cementing Shyamalan’s meteoric rise even further. By luck, it was also the last movie starring Mel Gibson where he was just Gibson the mega movie star, before “The Passion of the Christ” and various ugly off-screen controversies made him something else over a year later. Everything was coming Shyamalan’s way at the time, yet some warning signs were also starting to come in. While “Signs” had a share of critical acclaim, there were some significant concerns about some of his dialogue, his leaps of faith in mixing aliens with God, and certain logical errors about aliens who invaded a planet of mostly water despite being weakened by it, and a twist ending that was hardly considered on par with that of “The Sixth Sense” or “Unbreakable.” But at the time, Shyamalan’s past and present runaway success were too big to knock him off his new pedestal. And then the rest of his career happened to do that for him.

Most critics and audiences at the time forgave the more concerning aspects of “Signs” but did not do so for “The Village” two years later. From then on in, the sudden rise of Shyamalan was balanced out by his equally sudden fall from grace, as “Lady in the Water,” “The Happening,” “Avatar: The Last Airbender,” and “After Earth” turned him from an A-list wunderkind into a running joke. It took smaller scale hits like “The Visit” and “Split” to get some of his good name back, yet the widely derided “Glass” and “Old” drove it right back down. In almost the blink of an eye, Shyamalan went from a superstar director to a cautionary tale, despite his three straight runaway hits to jumpstart his career. But the first cracks in Shyamalan’s armor came with his third hit, as he ironically ignored those signs and went into a creative tailspin. If that is indeed a cautionary tale, perhaps it is one that Peele can heed if he has to in the coming days and weeks.

Like Shyamalan over 20 years ago, Peele is following up a massive opening hit and a respected successor with a seemingly simple but surely more complex alien invasion tale. “Nope” may well be a major box office hit like “Signs” was, yet if critics are more lukewarm than they were for his previous two hits, it may be the first cracks in his armor as a director too. Since “Nope” won’t lift any review embargos until just days before its opening (the social media reaction embargo has already lifted), one has to hope it is only to keep spoilers from leaking early. Even if “Nope” is a letdown compared to “Get Out” and “Us,” that doesn’t mean Peele will follow up with a string of far more obvious creative disasters. Still, few really thought Shyamalan would have so many worse disasters in him after “Signs” either. It may or may not be more unlikely with Peele, but anything is possible. Considering how Peele already has his own “The Sixth Sense” in “Get Out” almost to the letter and his own “Unbreakable” in “Us” almost to the letter, it would probably be more shocking if “Nope” wasn’t exactly like “Signs” almost to the letter as well. In that specific context, maybe it wouldn’t be so bad for “Nope” in general, since “Signs” was still a hit and still has a fair share of fans despite its various drawbacks – and is certainly not as loathed as future Shyamalan projects turned out to be.

Nevertheless, “Nope” represents an early crossroads for Peele as a director, just as “Signs” turned out to be for Shyamalan. Will “Nope” be a massive success that proves Peele is here to stay as a prominent director, an immense success that might still show warning signs in Peele’s longevity, or just a clear-cut step backward that takes him further away from his original meteoric rise? “Signs” was all of the above for Shyamalan exactly 20 years ago. But as it turned out – and hopefully won’t turn out for Peele no matter how “Nope” ends up – it would never get any better for him from there. Yet just because one sudden megastar director fell hard as quickly as he rose up, with a decline that could be traced right from his third major movie and its take on an alien encounter, does that mean another will follow those same footsteps right off his own cliff as well? In success, Peele has been following in Shyamalan’s footsteps almost precisely to this point. But now is the time for him to follow some brand new ones – and “Nope” will start to reveal if he can on July 22nd.

​Are you excited to see “Nope?” What are your thoughts on the careers of Jordan Peele and M. Night Shyamalan? Do you think Peele is heading in the same direction as Shyamalan or will be more consistent with his filmography? Please let us know your thoughts in the comments section below or on our Twitter account.