​Reactions To The 2020 Critics Choice Nominations 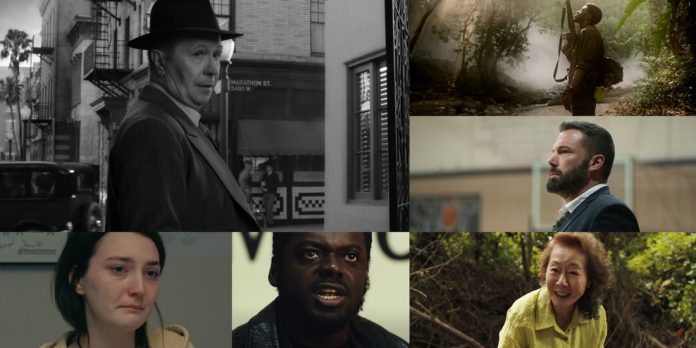 The nominations for the 2020 Critics Choice Awards were announced this morning, one of the major televised awards shows. After Golden Globe and SAG awards last week, this helps solidify where some of the major contenders stand. The key difference with CCA, though, is the number of nominees in each category can confuse more than clarify. With so many nominees in each category, it’s difficult to have any real surprises. The catch is that if something missed a nomination here, with so many nominees, it’s much more telling than what made it in.

​Let’s dive into the nominations and how they might affect the race.

THREE FEMALE DIRECTORS
Like the Golden Globes last week, the CCA included Chloe Zhao (“Nomadland“), Regina King (“One Night in Miami“), and Emerald Fennell (“Promising Young Woman“) in Best Director. Additionally, only two white men were among the nominees in the category (David Fincher for “Mank” & Aaron Sorkin for “The Trial of the Chicago 7“). Lee Isaac Chung (“Minari“) and Spike Lee (“Da 5 Bloods“) also made it in. This is an incredible lineup, but it also doesn’t help to clarify the Oscar nominees too much. Fennell has perhaps been the least expected of these nominees since her film is the most atypical awards contender, but any of the remaining six nominees could make up our Oscar lineup. The only notable misses here were George C. Wolfe for “Ma Rainey’s Black Bottom,” or perhaps Paul Greengrass for “News of the World,” if the Academy really loves the film.

EIGHT BEST ACTOR NOMINEES
*eye-roll emoji* Look, this is a little ridiculous. If your organization is going to have a set number of nominees, keep it there. It’s already a little silly to have seven nominees, but to arbitrarily expand the category to eight nominees is just dumb. With that many nominees, of course, there are no genuine snubs to discuss. Every legitimate contender made it in here, including Ben Affleck for “The Way Back,” who has been campaigning steadily. Delroy Lindo surprisingly missed both the Globes and SAG, so he needed to show up here, but again, with this many nominees, it’s hard to get a read on his place in the race. Boseman, Hopkins, and Ahmed feel the safest, and Oldman still feels secure. Vying for the last spot is Yeun, nominated at SAG, and Lindo, one of the critics’ favorites this year.

CLARITY IN BEST ACTRESS?
With Davis, Mulligan, McDormand, and Kirby feeling pretty safe, that fifth spot has been up for grabs. Andra Day scored a nomination at the Globes, while Amy Adams was nominated at SAG. Day was nominated for CCA this morning, but Adams missed, replaced instead by Zendaya and Sidney Flanigan. Adams’ miss isn’t terribly surprising considering the poor critical reception to “Hillbilly Elegy.” So, does this mean Day is snagging the fifth Oscar spot? It’s certainly possible, but this feels the most open to something unexpected. Flanigan, though she’s one of the best of the year, is unlikely to break into the Oscar race, unfortunately. Zendaya or Adams could do it. Even Sophia Loren, not nominated at any of the major precursors thus far, could still surprise. Day is in good shape for a nomination, but the race isn’t over yet.

A GOOD DAY FOR MINARI
After a poor showing at the Globes, “Minari” made up for it with big nominations at SAG and CCA. It got a massive ten nominations this morning, including Picture, Director, Actor, Supporting Actress, and Original Screenplay. Though it was looking rough for a time, this strong showing helps bolster its chances for a Best Picture Oscar nomination. Like Yeun, Yuh-Jung Youn isn’t a lock for a nomination but vying for one of those less guaranteed spots. Though I’m still not ready to predict many nominations for the film based on the Academy’s history, it’s been steadily showing up where it needs to.

BEST PICTURE LINEUP
With ten nominees, the lineup looked mostly as expected. After being shutout at the Globes, “Da 5 Bloods” reinforced its position with a nomination here. Despite nominations for Actor, Supporting Actress, Adapted Screenplay, and Editing, “The Father” missed a Best Picture nomination. Could that film be in store for a showing like “The Two Popes” last year, which just barely missed a Picture nomination? Additionally, “Judas and the Black Messiah” missed here. There’s no question that Warner Bros. botched the rollout of this film, holding onto it far too long. It could still surprise if and overperform at the Oscars, but it’s unlikely now. If we can realistically expect eight or nine nominations at the Oscars, we can probably take out Sound of Metal first, and possibly “Da 5 Bloods” next. But this is very close to our final lineup.

SCREENPLAY SURPRISES
In Original Screenplay, it’s a shame to see “Soul” miss, though it’s not entirely surprising at this point. “Never Rarely Sometimes Always” scored a much-needed nomination here and could be the sort of lone screenplay nominee that the Academy could potentially go for. “Da 5 Bloods” is the bigger surprise miss here, especially with Picture and Director nominations. The film continues to have strange snubs here and there, leaving it difficult to predict its Oscar trajectory.

In Adapted Screenplay, “I’m Thinking of Ending Things” surprisingly missed. If it was going to break in anywhere, it would’ve been CCA. The Academy does love Charlie Kaufman, but our five Oscar nominees are more likely among these six nominees.​

A common criticism of the CCA is that they try to predict the Oscars more than vote for their favorites. Today’s nominees didn’t do much to dispel that notion. Instead, these nominees do help us get a clearer picture of where this awards season is headed. We’ve still got lots of time left before the Oscar nominations, but today helped solidify the trajectory of many films. Now, we look to the BAFTA nominations as the next big precursor.

What did you think of the Critics Choice Award nominations? What was the biggest surprise of the morning? How does this change your predictions? Let us know in the comments below or over on our Twitter account.