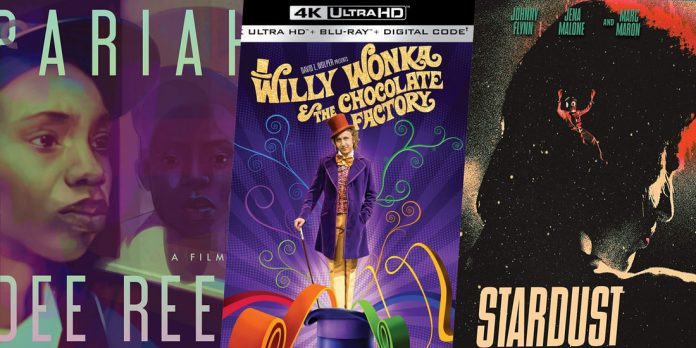 This week, we have some exciting Blu-ray and 4K upgrades, plus some hidden gems from fan-favorite boutique labels.​

​​There are a couple of big releases from the Criterion Collection this week. First, we have the 2011 film “Pariah,” directed by Dee Rees and starring Adepero Oduye, Kim Wayans, Aasha Davis, Charles Parnell, and Rob Morgan. This features a 2K digital transfer. It includes a new conversation between Rees and filmmaker and professor Michelle Parkerson, a recent cast reunion, a new program on the making of the film, and a new interview with film scholar Kara Keeling.

Also, from Criterion, we have a Blu-ray upgrade of the 1953 film “Pickup on South Street,” directed by Samuel Fuller and starring Richard Widmark, Jean Peters, and Thelma Ritter. This includes a new 4K digital restoration. It also features a new interview with critic Imogen Sara Smith, an archival interview with Fuller, and the 1982 French television program “Cinéma cinémas” in which Fuller discusses the making of the film.

​Paramount is releasing a few war films on Blu-ray. The first is the 1965 film “In Harm’s Way,” directed by Otto Preminger and starring John Wayne, Kirk Douglas, Patricia Neal, and Paula Prentiss. The other is the 1999 film “The General’s Daughter,” directed by Simon West and starring John Travolta, Madeleine Stowe, James Cromwell, and Timothy Hutton.

​Shout Factory has a few unique releases this week. The first is a new release: the 2020 David Bowie biopic “Stardust.” Directed by Gabriel Range, this stars Johnny Flynn, Jena Malone, Marc Maron, and Anthony Flanagan. They are also putting out a film starring David Bowie, the 1978 film “Just a Gigolo.” Directed by David Hemmings, this stars Bowie and Hemmings alongside Kim Novak and Marlene Dietrich. It includes a 30-page booklet, an audio commentary track, and a making-of featurette.

Shout Factory is also releasing a Steelbook upgrade for their Blu-ray release of “Battle Beyond the Stars.” From 1980, this film is directed by Jimmy T. Murakami, written by John Sayles, and stars Richard Thomas, Robert Vaughn, George Peppard, John Saxon, Sybil Danning, and Darlanne Fluegel. This features a new 2K transfer along with the extras from the previous Blu-ray release.