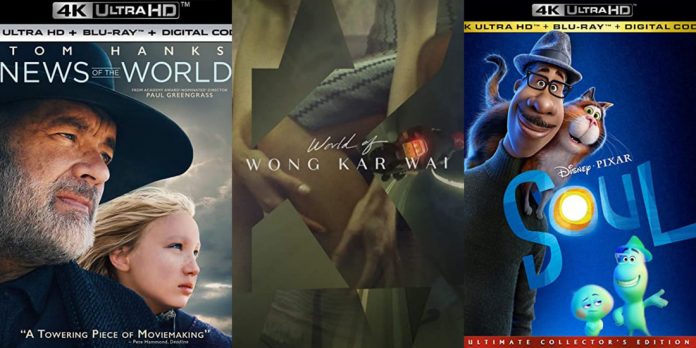 Big, big week in the world of physical media this week! From 2020 Oscar contenders, to major 4K upgrades, to a big and beautiful Criterion box set, let’s get started!

​A few major films are receiving 4K upgrades this week. First, we have the 1997 sci-fi film “Gattaca” receiving a 4K Steelbook. Directed by Andrew Niccol, this film stars Ethan Hawke, Uma Thurman, Jude Law, Gore Vidal, and Alan Arkin. This is newly remastered from a 4K scan of the original camera negative and carries over the previous Blu-ray release’s special features.

Finally, coming to 4K this week (fittingly) is “Batman V Superman: Dawn of Justice” Ultimate Edition. This is a 4K remaster of director Zack Snyder’s longer 182 minute cut of the 2016 film.

​However, none of these releases compare to what the Criterion Collection is putting out this week. Coming from Criterion, we have the “World of Wong Kar Wai,” a seven-disc box set devoted to the legendary director’s essential works. The films included in this set are “As Tears Go By” (1988), “Days of Being Wild” (1990), “Chungking Express” (1994), “Fallen Angels” (1995), “Happy Together” (1997), “In the Mood for Love” (2000), and “2046” (2004). This set features new 4K digital restorations of all the films, approved by Wong Kar Wai. These restorations have sparked some controversy online due to how different they look in terms of color-grading compared to their previous home video releases; however, they are all director-approved and seemingly reflect the films’ initial visions and releases. The set includes a new program with Wong Kar Wai answering questions provided by authors, filmmakers, cinematographers, and more. It also includes short films, interviews, and deleted scenes. All of this is put together in beautiful deluxe packaging with a bound, French-fold book containing photographs and various writings on the films and the director.

This week, in honor of the recent Best Director Oscar nominations for Chloé Zhao and Emerald Fennell, I wanted to recommend a female director in the Criterion Collection and one that received a Best Picture nomination but was snubbed in Best Director, and that is Barbra Streisand’s “The Prince of Tides” from 1991. Based on Pat Conroy’s novel, the film stars Streisand along with Nick Nolte, Blythe Danner, Kate Nelligan, Jeroen Krabbé, Melinda Dillon, George Carlin, and Jason Gould. It’s not a perfect film; some could argue it’s too melodramatic, and I do prefer her directorial debut “Yentl” as an overall film. However, it has unique story beats and goes to some rather dark places that are unexpected. Additionally, Streisand’s direction is strong, and any faults with the story feel more indicative of the time or the writing rather than her filmmaking.

The release from Criterion is stellar, as per usual. The film’s restoration looks incredible, particularly the flashback sequences in South Carolina and any exterior scenes by the water. It features many supplements, including interviews, archival featurettes on the making of the film and the novel, and an audio commentary with Streisand from 1991 that also features some updates made in 2019.

This film may have received seven Academy Award nominations, but it does not seem to be talked about as much anymore. However, between this release and some recent programming on the Criterion Channel, it is nice to see Streisand’s directorial efforts reevaluated and praised in the modern landscape. I hope this is only a sign to come for wonderful and thorough releases of her other two films. ​