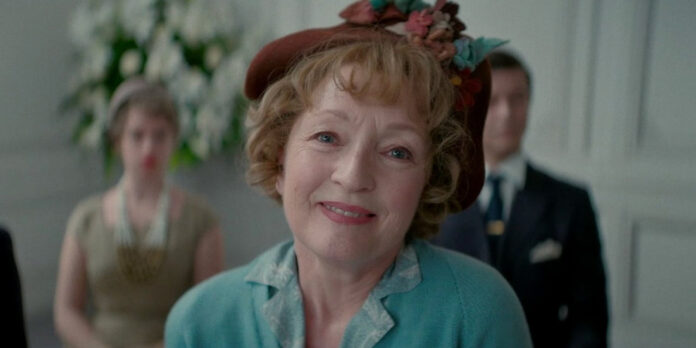 THE STORY – In 1950s London, a widowed cleaning lady falls madly in love with a couture Dior dress, deciding she must have one of her own. After working to raise the funds to pursue her dream, she embarks on an adventure to Paris that will change not only her own outlook — but the very future of the House of Dior.
​
THE CAST – Lesley Manville, Isabelle Huppert, Lambert Wilson, Alba Baptista, Lucas Bravo, Ellen Thomas, Rose Williams & Jason Isaacs

​Anthony Fabian’s “Mrs. Harris Goes to Paris” is the film many of us need right now. This cozy, heartwarming British film is full of stunning 1950s dresses and the attractive scenery of London and Paris. At its surface, it’s a simple tale of a working-class woman wanting to own an expensive gown and the lengths she goes to in order to obtain it, but it’s so much more than that. It’s about having a dream, about learning to open oneself up to love again, chasing that thing that makes you feel like someone brighter and better than who you see yourself as. And more than anything, it’s a film about how one woman’s warm heart touches the lives of those around her.

Ada Harris (Lesley Manville) is a cleaning woman working in London and waiting for any news of her husband Eddie, who never returned from World War II. Her best friend Vi (Ellen Thomas) encourages her to move on, but she’s having trouble not living in the past. Ada is even unsure how to deal with the attention of local bookie Archie (Jason Isaacs), who is clearly sweet to her. The plot truly takes off when Ada sees her client’s Dior dress, a strapless pink and purple gown, sparkling in the sunlight. She’s astounded to find out how much it costs, but it awakens a dream in her to own one. When she receives news that her husband was killed in 1944 and receives her widow’s pension, she decides to save up all of her money to fly to France and buy herself a dress at Dior. When Ada gets to Dior, they initially try to escort her out due to her class and status compared to their more high-end clientele, but she shows that she can pay in cash which catches the struggling business’s eye. While the heads of the fashion house and the other customers aren’t thrilled by her appearance, the models and the Marquis de Chassagne (Lambert Wilson) are delighted by her. Even though Ada convinces Madame Colbert (Isabelle Huppert) to allow her to buy a dress, she’s distressed to find out that it will take at least two weeks for it to be custom-made for her. However, the Dior accountant André Fauvel (Lucas Bravo) and the head model Natasha (Alba Baptista) fix things to allow her to stay.

“Mrs. Harris Goes to Paris” boasts a lovely ensemble cast of characters, including all of Ada’s clients in London. From her wealthy client who avoids paying her to the one who introduces all of his young hook-ups as his nieces (a charismatic and underutilized Christian McKay), they’re an eclectic bunch who compliment the film’s tone. Rose Williams stands out as Pamela Primrose, the fussy, untidy aspiring actress who looks to Ada to fix more than just her messy apartment. It’s also so fun to see the charismatic Isaac in a light-hearted role, particularly after his heartbreaking dramatic role last year in “Mass.” The people of Paris are as varied and engaging as those of London, from the overworked Natasha, who yearns to be more than the face of Dior, to the shy but kind André, who cannot hide his crush on her. The chemistry between Bravo and Baptista brings a sweet tension to their interactions, but it’s Huppert who is unsurprisingly the acting standout of the ensemble cast, especially in one heartbreaking scene towards the film’s climax.

“Mrs. Harris Goes To Paris” was adapted by Fabian, Carroll Cartwright, Keith Thompson, and Olivia Hetreed from Paul Gallico’s 1958 novel, “Mrs. ‘Arris Goes to Paris,” and it beautifully captures the charm and spirit of the novel in a compact two-hour film. From its first moment, with the lovely score by Rael Jones and the shots of 1950s London, it’s apparent how charming this story will be with its light tone and warm aesthetic. While on the surface, the film is primarily caught up in the sites of Paris and the wonderful look at the artistry of the dresses, it’s really about something much deeper on a character level. Ada is a woman who feels that she is invisible because of her age, occupation, and social class. But her little acts of kindness to those around her change their lives and hers. In Paris, she learns to open herself up to love again and not be afraid to look for something more meaningful in life, even if it’s represented by owning a dress.

Manville gives a fantastic performance as Ada, seamlessly disappearing into the down-to-earth cleaning lady even though it’s so different from the more dramatic roles she usually plays (particularly, “Phantom Thread“). From her fussing over André and Natasha to her quiet moments of despair, she brings a humanity to the role that makes it impossible not to feel for her as we desperately want to see her get her wish.

The fashion show of the dresses is one of the film’s highlights, with an incredible variety of outfits, each more dazzling than the last. It’s a  testament to the Dior brand and Jenny Beavan’s gorgeous costume design they stand out as much as they do, not just within this film but compared to other period dramas released this year. Fabian places a few dream-like sequences in which Ada fantasizes about her Dior gown. They remind us that it’s much more than just a piece of clothing that Ada is after – it’s what it means to her. André says admiringly that she is “a cleaner who dreams of the most beautiful dress in the world,” and it’s true. But “Mrs. Harris Goes to Paris” is about more than just wanting a new frock; it’s about learning to pursue your dreams even when they seem impossible and to appreciate beauty even when it seems out of reach.