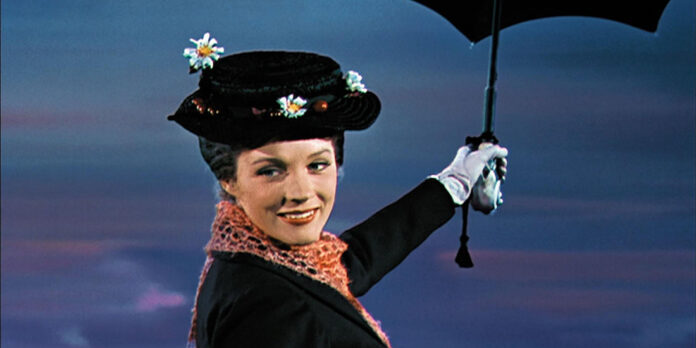 ​THE STORY – When Jane (Karen Dotrice) and Michael (Matthew Garber), the children of the wealthy and uptight Banks family, are faced with the prospect of a new nanny, they are pleasantly surprised by the arrival of the magical Mary Poppins (Julie Andrews). Embarking on a series of fantastical adventures with Mary and her Cockney performer friend, Bert (Dick Van Dyke), the siblings try to pass on some of their nanny’s sunny attitude to their preoccupied parents (David Tomlinson, Glynis Johns).
​
THE CAST – Julie Andrews, Dick Van Dyke, David Tomlinson & Glynis Johns

​​How do you review something that has been with you for what feels like your whole life? Something that you know so well that you could recite it forwards (“Supercalifragilisticexpialidocious”) and backward (“docious-ali-expi-istic-fragil-cali-rupus”)? It is genuinely difficult to be objective towards something that has brought me as much joy over the years as Walt Disney’s masterpiece “Mary Poppins,” but that is the task set before me, and that is what I shall do. But honestly… where to even begin? Perhaps, as Julie Andrews would sing in another blockbuster musical just one year after this, we should start at the very beginning. It is, after all, a very good place to start.

Walt Disney’s daughters loved P.L. Travers’s “Mary Poppins” novels. As early as 1938, he attempted to purchase the film rights to them but was not able to get Travers to consent until 1961, and even then, Travers had approval over the script and served as an advisor to the production. But Disney poured his heart, soul, and millions upon millions of dollars into making the film his most magnificent creation to date. And lo, it came to pass that “Mary Poppins” was the only full-length feature film Disney produced to earn an Oscar nomination for Best Picture in his lifetime.

And what a film it is! I think it goes without saying that this is perhaps the most Disney film the House of Mouse ever produced, combining all the best elements of the studio’s live action and animated films and buffing them to such a high sheen that it is nearly impossible to not leave the film utterly charmed. This is the best kind of family entertainment – the kind that never talks down to its audience. It is impeccably crafted, from the sets (Carroll Clark, William H. Tuntke, Emile Kuri, and Hal Gausman’s delightful, picturesque art direction received an Oscar nomination) to the costumes (Tony Walton, also earning an Oscar nomination), from the sound (Robert O. Cook’s work was Oscar-nominated) to the shining score (Richard and Robert Sherman doing the best work of their storied career and winning two Oscars, for Score and Song). And of course, there are the visual effects (Oscar win number 3, if you’re keeping track).

One of the most winning things about “Mary Poppins” is the sense of wonder it creates right off the bat when we see Julie Andrews’s titular nanny applying makeup while sitting on a cloud, making sure to pick up and re-set her carpet bag and umbrella as they threaten to fall straight through the fluffy thing. It is the first of many visual effects shots in the film, nearly every single one a wonder. There’s the live action-animation hybrid “Jolly Holiday” sequence, of course, but even more astonishing is the “Spoonful of Sugar” number, in which the Banks household nursery comes to life in spectacular fashion, cleaning itself up at the sound of a snap. Yes some of the composite shots are badly noticeable now, but it’s hard not to be awed and charmed as the children’s beds make themselves, cabinet doors open and shut to make music of their own, clothes fold themselves and fly into drawers, and a group of wooden soldiers march their way right back into the toy chest. Even as an adult who has seen computers generate entire fully believable worlds out of nothing, there are still some effects that inspire a “how did they do that?!?” response – a favorite has always been the carousel horses that simply hop right off the carousel and ride around the animated countryside. Go ahead, look for a wire, or any other technical trickery. You won’t find it. And the poles leave perfect little divets in the animated ground, too, utterly seamlessly.

While the technical elements of the film are superb, that does not mean that the human element gets lost. On the contrary, the performers dazzle as much as the visual effects do! Disney assembled quite the cast, including Academy Award nominees Ed Wynn, Elsa Lanchester, Glynis Johns, Hermione Baddeley, and in her last film role, Jane Darwell, alongside Emmy Award winner Dick Van Dyke (in two roles) and newly minted Broadway star Julie Andrews in what would become her Oscar-winning role. Turned down by Jack Warner for the film adaptation of “My Fair Lady,” which she originated on Broadway because she was not yet a big enough star, Andrews was aggressively courted by Disney for this, and I am hard-pressed to name a film debut this assured and iconic. Andrews does not have much of an arc to play, nor does she have much of a character at all, really, so much as a series of things Mary says she is or is not, or will or will not do (which she often contradicts). We know not from whence Mary Poppins came, or why she does what she does, but Andrews is so charismatic and delivers such perfect line readings that it does not matter in the slightest. Her sly sense of humor is a huge boon to the film, as are her sublime reaction shots – she could kill you with a look but is seemingly content to simply stop you in your tracks. Her ability to say the most tongue-twistingly difficult dialogue at top speed with seemingly no effort is perhaps only matched in all of film history by Rosalind Russell in “His Girl Friday,” and what tremendous company that is to be in! What Andrews does in lieu of playing a character, essentially, is to play a human embodiment of optimism in all its many facets. Not an easy task, to play a concept and still come across as a human being, but she does it brilliantly, especially in her very last scene, watching out a window as the Banks family goes to fly a kite without saying so much as a goodbye to her. It’s a melancholy moment, or it should be, but the subtle smile never leaves her lips, and she protests just the right amount when her umbrella handle starts telling her how sad she is. She may be sad, or she may not be, but what’s really important is that her task here is done, and there is someone somewhere else who needs her. It is time to leave, and she does so with a smile, looking forward to whatever is next.

Frankly, it hardly matters what the rest of the cast does when the central performance is so magical, but while Mary Poppins may be the central character, the film is really about the Banks family, and in particular Mr. Banks. The perpetually undervalued David Tomlinson is an ideal straight man for the majority of the film, but very much a side character to the adventures of Mary and the children. So when the third act of the film pivots to focus on him, it comes as a surprise. But Tomlinson is more than able to carry that burden, selling the character’s change of heart so well that we hardly notice that this is a man in whom we have previously not had very much emotional investment (if any at all). It’s also a testament to the film’s direction (Robert Stevenson, Oscar-nominated) and cinematography (Edward Colman, Oscar-nominated… perhaps you are noticing a pattern here?) that this entire sequence plays as well as it does. Shooting the bank like something out of a horror film, all chiaroscuro in black, white, and red, lets every child know just what a scary situation this is for Mr. Banks, and even though the word is never spoken, it’s never in doubt that Mr. Banks has been fired, and that thanks to his children and Mary Poppins, he is able to realize that it’s okay, because his carefully ordered life of rules and regulations never made him truly happy. That’s a lot to get across, especially to children who know very little if anything of the darker side of life, and even more so without a lot of direct dialog references. But I have never watched “Mary Poppins” and not understood exactly what is happening in this scene, even if I may not have known enough to put it into words.

But that is perhaps the register in which “Mary Poppins” works best: Using sound and image to create a feeling just beyond what words can express. I’ve written over 1,300 words now and I still feel as though I have not captured the true essence of what makes this such a great film, perhaps one of the greatest ever made. I could certainly write more (I could easily write another 1,300 words just on the mind-blowing “Step In Time” production number, one of the greatest dance numbers ever filmed), but that almost feels beside the point. “Mary Poppins” simply is what it is, and the best I can say is that it is a film that truly feels made with great love and care for the child in all of us, made by people who were as in touch with their inner child as anyone has ever been, and achieves everything it does through pure movie magic. And I don’t know what more you could want than that.