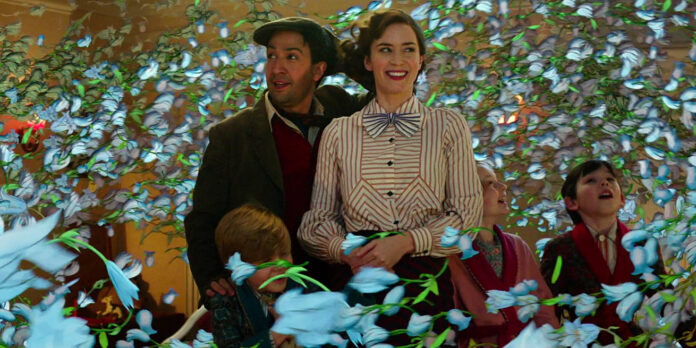 THE STORY – The mysterious Mary Poppins returns to Depression-era London to visit Jane and her brother Michael, now a father of three, and helps them rediscover the joy they knew as children.

​​​​​“Mary Poppins” has brought joy to four generations so far. Any successor was going be have its work cut out for it. So Disney opted, as it did with “Star Wars: The Force Awakens” to play it safe and follow in the original film’s footsteps as closely as possible. And as with “The Force Awakens,” this safeness means the nostalgia factor is likely to bring a certain amount of joy to audiences who love the original “Mary Poppins,” but it also proves to be a hindrance.

“Mary Poppins Returns” essentially follows the original film’s story beat for beat. Sure, there are slight differences: The Banks children are grown up, and we now have lamp lighters instead of chimney sweeps, but generally, the plot is exactly the same. And, much like the source material, the plot is thin. The emphasis for both “Mary Poppins” films is on the visuals, charm, and musical numbers. In the best musicals, that is forgivable if the numbers are impressive enough. And sometimes they are.

Rob Marshall (no stranger to musicals) plants a jaw-dropper of a musical number in the middle of “Mary Poppins Returns” with “Trip a Little Light Fantastic.” The choreography, cinematography, editing, and sound are nothing short of spectacular. Marshall is a master of musical craft (He directed “Chicago,” “Nine” and “Into The Woods”) and here he is firing on all cylinders. Unfortunately, when a film eschews plot in favor of musical numbers, more than one or two of those numbers need to be jaw-droppers. And here sadly, they are not. Like many Disney films, “Mary Poppins Returns” is full of CGI. Far too many musical sequences, like an interminable undersea jaunt, are over CGI’d and soulless that could have belonged in any of Disney’s live-action films this decade. Think less Busby Berkeley and more Tim Burton’s “Alice in Wonderland.”

More importantly, when this sequel leans so heavily on its action and musical sequences, the characters take a backseat. The emotional climax revolves around a grownup Michael Banks (Ben Whishaw) learning to appreciate his young children. The problem is, his relationship with them and subsequent revelation is barely fleshed out and robs the emotional revelations of some of their impact. Fortunately, the cast is gifted enough to compensate for the thin script. Blunt oozes charm, honoring Julie Andrews’ Oscar-winning performance, but offering her own twist on the part (there’s a melancholy streak that pervades her performance), while Ben Whishaw continues to impress. Lin Manuel Miranda’s accent is absolutely hideous, but presumably, that was a deliberate choice as a tribute to Dick Van Dyke, and yet, he still manages to bring the same level of charm. These three actors, especially Blunt, elevate the film considerably. Blunt, in particular, is magnetic and frankly makes you wonder how anyone else ever could play the part. And yes, Meryl Streep is a delight in a small one-scene part that is sure to bring the house down (or turn it upside down). I can genuinely say you’ve never seen Meryl Streep like this before.

The film is technically well put together, boasting a thoroughly hummable score courtesy of Marc Shaiman, and some gorgeous costumes and production design. Ultimately, “Mary Poppins Returns” has enough going for it to be considered worth seeing for both adults and children alike. When it works, in moments such as “Trip a Little Light Fantastic,” it evokes the joy of the original film and of the best screen musicals. However, those moments appear inconsistently and the film leans on nostalgia far too often to compensate. But everyone involved clearly loves “Mary Poppins.” They want to handle the original Disney film with dignity and care. And for the most part, they do a respectable job even though they don’t necessarily try to re-invent the wheel. It plays itself too safe and like the original, it can drag at times due to its thin plot but it also tries so hard to win you over, especially with someone like Emily Blunt at the forefront delivering a performance this charming, that it ultimately becomes too difficult to resist. See “Mary Poppins Returns” and enjoy it for what it is. It may not be perfect, but it’s a well-intentioned and charming time at the movies.