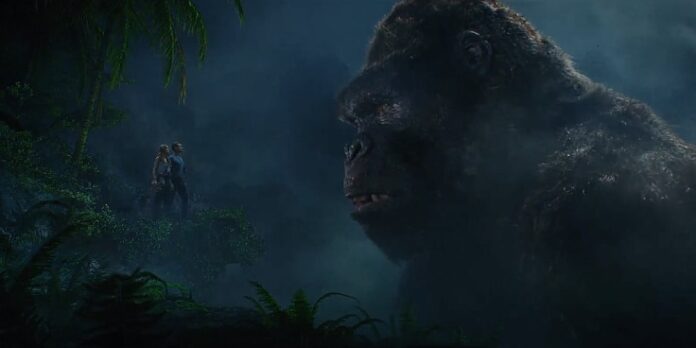 THE STORY – This film fully immerses audiences in the mysterious and dangerous home of the king of the apes as a team of explorers ventures deep inside the treacherous, primordial island.

​Say what you will about Peter Jackson’s divisive 2005 remake of “King Kong.” However, the one thing that film had going for it against this 2017 film featuring the big ape is that the title character at least had some level of personality. In “Kong: Skull Island” one might be mistaken to believe that Kong himself is actually the film’s villain at first. Once the film’s true villain is actually revealed it becomes clear that the real villain here are the filmmakers, who butcher characterization and basic storytelling techniques to give us a film that is high on spectacle and light on everything else.

It’s 1973 and government official/scientist Bill Randa (John Goodman) along with his assistant and geologist, Houston Brooks (Corey Hawkins) are doing everything they can to bring together an expedition to explore an uncharted island that they believe contains potential “monsters.” They receive the funding and a team of scientists and a military escort led by Colonel Preston Packard (Samuel L. Jackson) that includes Captain Earl Cole (Shea Whigham), Slivko (Thomas Mann), Reles (Eugene Cordero), Glenn Mills (Jason Mitchell), and Jack Chapman (Toby Kebell). It’s not enough though, as Bill and Houston get the aid of a British tracker/mercenary named James Conrad (Tom Hiddleston) and a war photographer named Mason Weaver (Brie Larson) to get a shot of the beasts that live on the island so they can bring it back to prove that monsters truly do exist. When they arrive at Skull Island, they encounter large unbelievable creatures such as the giant ape known as Kong and man-eating lizards that long-time island resident Hank Marlow (John C. Reilly) refers to as “skull crawlers.”

“Kong: Skull Island” is right away put into a bad spot when we are introduced to basic characters with simple motivations and lack dimensionality. Tom Hiddleston is the charismatic tracker/mercenary. John Goodman is the whacky scientist who believes that monsters exist on the island. Samuel L. Jackson is the hard-nosed army commander who is nearing retirement. And Academy Award winner Brie Larson is a war photographer who, other than to get photographic proof of what exactly inhabits the island, happens to simply be along for the ride. Only John C. Reilly has a truly exciting backstory and becomes a character we actively want to root for. It’s just a shame really that he is bogged down by such unfunny dialogue which not once manages to land correctly for a single character in this film. Even Shea Whigham, who does the best with what he is given to deliver a few funny one-liners, never is able to drive the dialogue home.

So we have poor characterization and poor dialogue. Nobody would care if they managed to get Kong himself right. Am I right? Well, the answer is no. Unfortunately, Kong’s first scene is a multiple helicopter action scene that while it looks very epic in scope and is shot very well (Larry Fong is the cinematographer on this film and it truly looks stunning in some scenes), it’s ultimately brought down by Kong’s own motivations. In 2005’s “King Kong” the giant ape did everything he could to not harm humans and instead was always either afraid of them, like in New York City, or trying to protect them from the creatures which inhabit Skull Island. While those clashes with the lizard-like creatures does occur in “Kong: Skull Island” it’s this first scene with the helicopters which proves that director Jordan Vogt-Roberts has action and spectacle on his mind instead of logic and storytelling. When Samuel L. Jackson’s character says he wants to take revenge against the giant monkey for killing his men, he’s not technically wrong even though he’s really the true enemy in this movie. It creates for an odd viewing experience where we are forced to shut our brains completely off and enjoy Larry Fong’s “Apocalypse Now” influenced imagery and Jordan Vogt-Roberts’s “Jurassic Park” influenced action set-pieces. Neither adds up to a film that is compelling nor substantial in any way.

With a huge cast of likable actors that are either done away with before we can ever really get to know them or are lacking in characterization (We did not even mention Toby Kebbell, Jason Mitchell, Corey Hawkins or Jing Tian), “Kong: Skull Island” is forced to put its focus on the main character himself: Kong. Unfortunately, director Jordan Vogt-Roberts is more content with focusing on the apes’ part within the action scenes and less on the ape himself. “Kong: Skull Island” is a film lacking in humanity and as a result becomes a meaningless cash grab by the studio to one day do a Godzilla vs. King Kong movie. Don’t even get me started on the poor editing transitions or forceful music choices within this film. If you’re going for the epic scope and spectacle, then “Kong: Skull Island” will be worth your time. For everyone else, this is one island you will not want to travel to anytime soon.