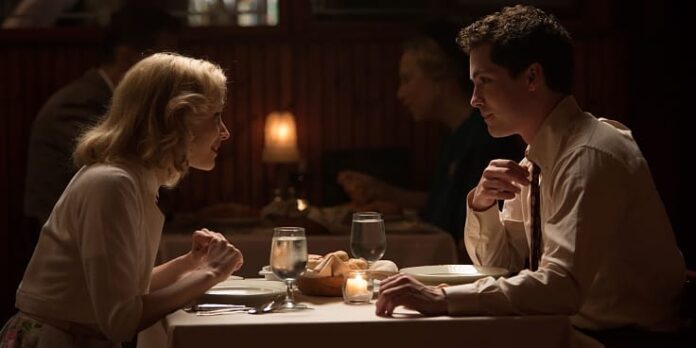 ​​“Indignation” might be the first adaptation of a Philip Roth novel that I actually enjoyed until the ending of the film creates a bookend structure for the movie that threatens to take away all of the goodwill the film had previously built up. The opening and ending to the film is contrived, pointless and we’re left wondering what is the point? However, contained within these two moments is a story of a young man who is trying to live in a world that is constantly challenging and controlling him. There are fascinating themes, performances, and eloquent writing that not only captures the time period with which the story takes place in but also the ideologies and beliefs that helped trap people and deprived them of their own discovery of identity and purpose.

Taking place during the 1950’s, an intelligent Jewish boy from New Jersey named Marcus Messner (Logan Lerman) leaves behind his overbearing and protective parents (Danny Burstein & Linda Emond) to attend a small college in Ohio. Despite being an atheist, he is forced to attend the school’s religious ceremonies and tries his best to keep to himself and avoid the dangers his parents warned him about when it comes to adult life. Try as hard as he may, he cannot resist the temptation of Olivia Hutton (Sarah Gadon), a fellow student who takes a liking to Marcus and makes forward advancements towards him. Now confused and wrestling with his own beliefs between right and wrong, Marcus is confronted by the school’s dean, Hawes D. Caudwell (Tracy Letts) on his own feelings towards Olivia, his place within the school and his own future.

Logan Lerman gives one of his best performances as the young Marcus Messner. He has his entire future ahead of him. He’s smart, caring and also begging for a chance to be his own person. Previously being held down for most of his life by his overbearing parents and forced to conform to the rules of the school he attends, Marcus sees himself as superior to most people he encounters in his life. His relationship with Olivia Hutton is a curious one as she pushes him to confront a side of himself which he has never explored before and this causes him to rebel in unexpected ways. The scenes in which he shares with Tracy Letts are some of the most intense and thoughtfully written as any I’ve seen this year as they explore Marcus’s mindset, his fears, his strengths and his weaknesses. There is a maturity to the writing that much like Marcus himself, is smart and sophisticated, until it is not. The ending to the film suffers from a denouncement that is unexplained and unnecessary. Had the film simply ended with the previous scene and the accompanying voice-over narration from Logan Lerman, it would have been a much more satisfying story. “Indignation” wants to explore a character that feels he is being held down by the world, held down by his parents, his school, and by his own weakness. However, “Indignation” also wants to place focus on the Olivia Hutton character in a way that muddles this exploration and eventually the film gets caught up in a trap of trying to bite off more than it can chew.

“Indignation” is still a fine film that explores many different themes from social responsibility to sexual awakening, identity, and religion. However, Roth’s material once again proves to be too dense for the screen. James Schamus does an admirable job writing and directing this film and as far as debut films go, this is a strong start for the former CEO of Focus Features. It boasts some clever writing, excellent performances (Especially from Tracy Letts) and is finely crafted in terms of its music Jay Wadley and cinematography by Christopher Blauvelt. At one point in the fascinating set piece between Lerman and Letts, the Dean moves forward and tells Marcus “I’m genuinely sorry if you feel I’m wasting your time.” Despite not being perfect in its execution, there’s no need for “Indignation” to apologize for anything.