“HONK FOR JESUS. SAVE YOUR SOUL” 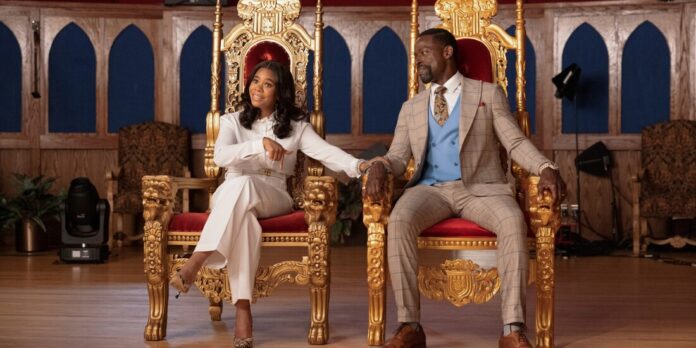 THE STORY – As the proud first lady of a Southern Baptist megachurch, Trinitie Childs carries immense responsibility on her shoulders. Her church, Wander To Greater Paths, once served a congregation in the tens of thousands, but after a scandal involving her husband, Pastor Lee-Curtis Childs, forced the church to close temporarily, Trinitie is struggling to manage the aftermath. Now Trinitie and Lee-Curtis must rebuild their congregation and reconcile their faith by all means necessary to make the biggest comeback that commodified religion has ever seen.

Regina Hall is in this movie. To the many who know the talent and abilities of one of the greatest character actresses working today, that’s all that needs to be said to get them excited to watch “Honk for Jesus. Save Your Soul.” And, yes, Hall is undoubtedly the best part and biggest reason to seek out this film. But suppose she’s the hook that gets the audience in the door. In that case, they’re sure to discover a scattered yet humorous look into misplaced trust and what power can do when abused, especially when spawned by religious hypocrisy.

Trinitie Childs (Hall) is the wife of Pastor Lee-Curtis Childs (Sterling K. Brown), the leader of the Southern Baptist megachurch Wander to Greater Paths. After Lee-Curtis became embroiled in a scandal, the church was forced to close, and their congregation fled to a competing house of worship. Now, before Easter, the Childs seek to reopen their church and rebuild their flock of devotees, no matter how it may strain their already-tense marriage.

Director-writer Adamma Ebo uses dual filmmaking styles to portray the story of the embittered Childs couple. The film is half a mockumentary covering them as they attempt to drum up support for their church before the doors are opened once again and half a typical narrative film. These two approaches are delineated by shifting aspect ratios and subtle but noticeable changes in cinematographic language and blocking in relation to the camera. It’s an intelligent strategy that reveals telling aspects of the characters’ personalities and struggles. In the documentary footage, the Childs perform a forced version of happiness and confidence, making the audience feel like the congregation is fed a highly manicured vision of the power couple. And in the narrative footage, this illusion is stripped away. The switch between the two methods is often abrupt, leading to comic juxtapositions that visually comment on the situation and change the mood.

While the script is undoubtedly funny at times, the general sense of humor recedes at a certain point to reveal a telling look at a couple doing their best to keep up appearances both in the spotlight and between themselves in private. While it’s certainly ambitious in the way it manages to switch intention and tone, it can make the story feel a bit cramped. The film begins as a broad satire of megachurch excess, moves onto a humorous rivalry between the Childs and another burgeoning church, pivots to several other plot points and topics, and then circles back around to the couple at the center and points a camera directly at their personal struggles. It’s a lot to take in for such a short, small movie. If it had been more focused, it could be even more impactful.

Both actors are astounding as the dynamic but troubled duo at the film’s center. Brown maximizes the natural charisma which has brought him acclaim in his other work. He is energetic and magnetizing. And yet, he’s still able to allow the character’s inner demons to poke through without making them too obvious occasionally. And, of course, Hall is stupendous. She’s a total pro who knows how to portray every angle of the multilayered Trinitie accurately. Hall is hilarious but can still show the stress and pain behind her character’s smile. And when she’s finally allowed to break free and show the angry, hurt woman inside, it’s impossible to look away.

It may attempt to pack a bit too much into its story, but “Honk for Jesus. Save Your Soul.” is a promising feature debut for Ebo. And it’s yet another example of why Regina Hall deserves every opportunity coming her way.