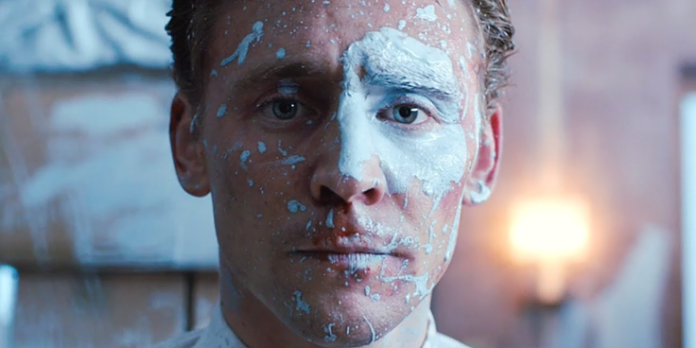 While I have no doubt that “High-Rise” is not short on big ideas, it’s execution leaves much to be desired. Visionary director Ben Wheatley creates a ton of good looking visuals that don’t amount to much. It’s a series of gorgeous shots set to music, much in the same way a music video is presented. It’s jarring, unappealing, yet undoubtedly beautiful and thought-provoking.

Based on the 1975 novel of the same name by J.G. Ballard, “High-Rise” is a sci-fi dystopian set film that takes place in a modern and luxurious high-rise building, which separates its tenants of differing social class by each ascending floor. Dr. Robert Laing (Tom Hiddleston) has just recently moved into the tall building and is sitting pretty on the 25th floor. Along the way, he has encounters with the architect of the building, Anthony Royal (Jeremy Irons), who lives on the top floor and is equipped with his own green scenery, including horses. He meets Royal’s aide Charlotte Melville (Sienna Miller), who becomes attracted to the young doctor. And he also gets acquainted with Richard Wilder (Luke Evans), who is a documentary filmmaker that is obsessed with capturing the split lifestyle of those who live in the building. His pregnant wife Helen (Elisabeth Moss), lives with him on the lower floors and also forms a relationship with Laing. As Laing gets his life adjusted, he slowly comes to realize that civil unrest is prevalent in the high-rise, which could lead towards anarchy for all those who live in the building.

As stated above, the cinematography and production design for this film is exceedingly beautiful. I’m going to keep making comparisons to music videos here as even the slow motion editing and random cutaways help the viewer to feel like they are in a dystopian music video with very minimal dramatic heft involved. And therein lies the issue. Despite production values being higher than anything Ben Wheatley has ever been granted on a feature length film, he stumbles in his execution of the story. If it had been handled better, it could have had as much power and resonance as another sci-fi film built on class warfare, “Snowpiercer.”

Of all the performers in this film, it may surprise you to find out that it’s not Hiddleston who impresses the most. Instead, it is Luke Evans as Richard Wilder who gives the most complex and layered performance, going for broke in a film that fails to keep him afloat. Everyone else is present and looks pretty. But that’s about it. I’m sure that Wheatley was able to explain to them the intricacies of the script and the story he was trying to tell, but somewhere in the editing room that vision became lost. One other bright spot on the creative side of production is the score by the ever great Clint Mansell. I have praised this composer so much over the years that it’s becoming repetitious, but it’s deserved in every sense. Mansell simply knows how to elevate any project he is connected with and “High-Rise” is no exception.

While the tribal warfare that develops between the tenants of the high-rise is clever and filled with ideas that mirror our own society, the manner in which Ben Wheatley conveys that theme over to the audience is not as clear and concise as it should’ve been. He elects a style over substance presentation, which includes colorful cinematography and modern production design with a handsome looking cast. And although the story is not lacking in subtext, it’s a story that might be better digested in its original written form than having to sit through two hours of this mindless music video mashup.