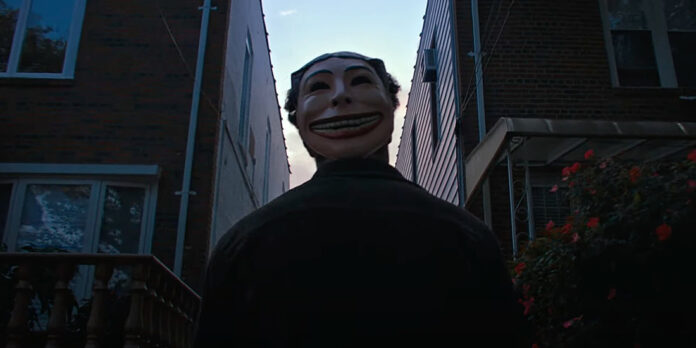 THE STORY – After his grandparents’ home is destroyed by a greedy real estate developer, a young New Yorker takes revenge under a masked persona.

There is always much to appreciate from a good character study. It’s an excellent opportunity to descend into an individual’s life to discover all the intricate minutia regarding their personality and how they interpret events that unfold around them. It can be an interesting exercise, though this attempt can also be a chore to experience without a deft hand guiding one through the material. Sadly for “Funny Face,” things fall more on the latter side. Despite one beguiling performance at the center, much of this film ends up hollow and tiresome.

The story centers on a young man named Saul (Cosmo Jarvis), who finds himself at the center of a turbulent time when his grandparents’ home is due to be soon demolished because of the neighborhood’s changing demographics. As the impulse to draw further into his isolation intensifies, he comes across a mask with an exaggerated grin that he feels can give him the strength of a vigilante. Along the way, he also crosses paths with Zama (Dela Meskienyar), an Arab woman dealing with the recent death of her parents. The two form a strong bond as outsiders against a harsh world. As they set their sights on striking back against the affluent interlopers, the insidious real estate developer (Johnny Lee Miller) begins to take notice. Tensions rise, and soon Saul must confront all the demons that continuously haunt him.

There’s a very vibrant sense of filmmaking that director Tim Sutton infuses in this piece. The textured cinematography gives an appropriate amount of detail to this world, and it’s often filled with striking compositions. Unfortunately, this is about the only magnetic element he brings. His script, in particular, is riddled with shallow characters and an inert plot that barely creates a compelling arc. The storylines slowly collide into one another in the most tangential of ways, and it causes the pacing to become interminably dull. The story plays on repetitive and stale themes, occupied by characters that are thinly developed. There are handsome aesthetics on display, but the vision that Sutton brings does not seem to revel in the environment it looks to dissect. What’s presented is a monotonous tone that struggles to make its storytelling riveting.

It has been quite fascinating to watch the career of Jarvis progress from a creative songwriter with a niche following to one of the most uniquely talented actors working today. Following the quiet stoicism of “Lady Macbeth” and the internalized intensity of “The Shadow of Violence,” his portrayal here has shades of more manic behavior while also realizing the deep well of anxiety and turmoil that exists within. His ability to inhabit reserved characters that embody a complex emotional range that treads just beneath the surface is admirable. While he is saddled with a weakly constructed character, his performance is still quite captivating. Jarvis continues to showcase his capabilities as an intriguing performer, and he commands every frame he’s in, even when the narrative itself isn’t as engaging as his performance.

It’s a shame that a single performance is the extent of the praise this ensemble deserves, especially because the other players are not necessarily doing subpar work. It’s mainly because they are saddled with roles that do not offer much to convey. Meskienyar has somewhat charming chemistry with Jarvis, but she’s mostly just serviceable as a character with little depth or nuance. Miller embodies a one-note villain that is built upon a collection of stern glances. Even the veteran actors who appear are utterly wasted. Victor Garber arrives in a tense scene as the developer’s father, and it is admittedly one of the few moments that brings life into the story. He’s quite a mesmerizing figure in his brief screen time. The same cannot be said for Rhea Perlman and Dan Hedaya; two wonderful actors reduced to walk-on cameos as Saul’s grandparents who contribute nothing in proportion to their abilities.

Flawed films with an enticing central performance are common, and “Funny Face” most certainly fits into that landscape. Jarvis does a credible job at delivering a gratifying turn to witness, crafting a somber character with a deep well of dark intrigue. He is, unfortunately, the only exceptional thing about the film, as the rest of the cast struggles with a script that offers very little. The storytelling moves at a listless pace and never finds one invested in any of the stakes or motivations. This film attempts to be yet another brooding character study, and it is successful on the main topic. The elements surrounding its subject leave much to be desired, though.