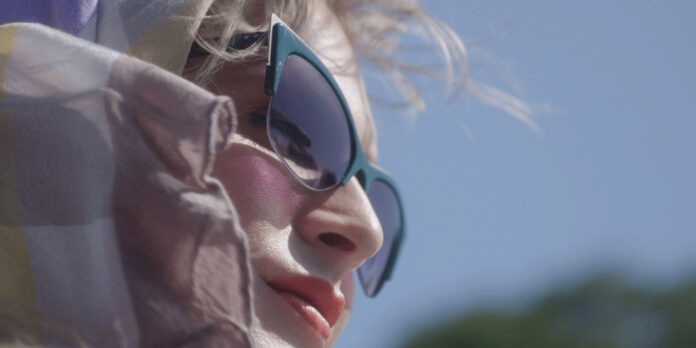 THE STORY – Agnes, the pioneering, pseudonymized transgender woman who participated in Harold Garfinkel’s gender health research at UCLA in the 1960s, has long stood as a figurehead of trans history. In this rigorous cinematic exercise that blends fiction and nonfiction, director Chase Joynt explores where and how her platform has become a pigeonhole.​

With documentary filmmaking, how the story is told is just as important to the success of the film as to how engaging the subject itself is, if not more. “Framing Agnes,” the new documentary from Chase Joynt, blows open what are already becoming typified mainstream talking points of transgender culture and identity through an atypical structure and format that even manages to comment on the film’s deconstructivist perspective subtly. It is a challenging film that expects its audience to sit up with their brains fully activated the entire time; for those watching who are tuned into its wavelength, the intellectual rewards are plenty.

The clever central concept for the film revolves around a scripted talk show in the style of 1950s programs, such as “The Mike Wallace Interview.” The dialogue for these staged conversations, led by the director, comes from a series of interviews of trans individuals, which Harold Garfinkel of UCLA conducted over half a century ago. Notably, these files were hidden away in a file cabinet that had been rusted shut by time, requiring the filmmakers to pry open history quite literally in order to find what they were looking for. Standing in for the folks being interviewed are a host of talented actors. The film peppers snippets of these conversations throughout, accurately portrayed with period-appropriate costumes and shot in black-and-white, while also showing testimonials from the trans actors and gender identity experts wherein the themes and topics of the archival transcripts are fleshed out and given further context.

The film’s format takes a bit of getting used to. It quickly jumps into the talk show conversations without much explanation and spends nearly as much time discussing the project of the film and the interviews as showing the interviews themselves, which can make it a bit tricky to find a solid foundation upon which to base the focus of the film. However, once it settles into this atypical structure, it manages to achieve the magic trick of saying something about the content of the film itself. When so many of the discussions depicted, both from the past and the present day, revolve around the idea of looking at and challenging what is viewed by many as the expected norm, such a refreshingly unconventional filmmaking approach works perfectly.

There is something about listening to intelligent people speak in a highly intellectual manner that can make the listeners feel smarter by mere proximity. The speakers in “Framing Agnes” do just that. These experts lay out their opinions and discoveries with incredible focus and clarity, making many astute points and relaying personal observations that bring an individualistic touch to the theories and findings on gender being discussed. To put it simply, several points are made.

One of the more enlightening aspects of this documentary is the way that the past and the present are linked together. Obviously, much of the terminology and questions asked in Garfinkel’s transcripts are unbelievably dated. Still, the interviewees of the past lay them out with clarity, similar answers, and talking points that those commenting on current topics in the film touch upon. Many moments stand out as feeling refreshingly timely, such as when an excerpt from the memoir of a trans man going by the pseudonym of Harry is read; the ideas he has and the ways in which he expresses them, even in the short section read, shows that aspects of present-day gender discussion are not as new as many would like to believe. Similarly, the case of a Black trans woman going by the name of Georgia (brought to vibrant life by a fantastic Angelica Ross in the talk show segments) makes clear that modern-day discussions of intersectional rights and the dangers and unique struggles faced by trans people of color have been a vital issue going quite a way back.

“Framing Agnes” packs a lot of commentary and reflection into a short 75-minute runtime. And while it’s relatively academic in both the types of topics covered and how they are discussed, it still manages to highlight the personal joys and positive life experiences of the individuals featured, both those from yesterday and today.