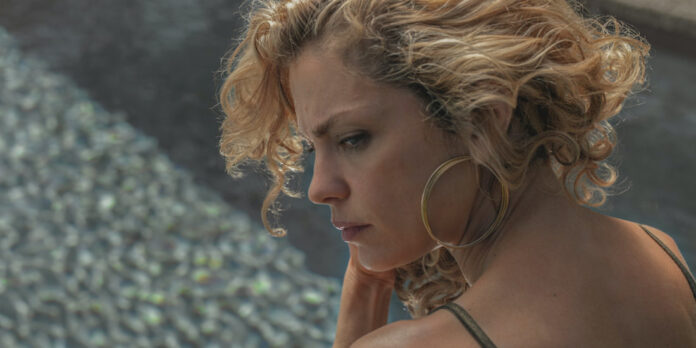 THE STORY – A young woman lies in pain while a boy questions her about what happened. Together they unravel a haunting story of broken souls, toxins, looming environmental and spiritual catastrophes, and the ties that bind a parent to a child.

10/12/2021
​By Sara Clements
​
​Claudia Llosa’s “Fever Dream,” based on the novel by Samanta Schweblin, captures the often disturbing and unpleasant nature of such dreams. A nightmarish summer vacation wrought with sickness, the film is narrated unreliably through the main character Amanda’s (María Valverde) delirium and her conversations with her neighbor’s son, David (played by Marcelo Michinaux and Emilio Vodanovich at different ages). It’s a psychological head trip that struggles to find its footing. It contains exciting themes – mysticism, environmentalism, motherhood – but the way it’s told, as Amanda describes, is both confusing and insane.

The film follows Amanda and her daughter Nina (Guillermina Sorribes Liotta) as they arrive at their summer house in the Argentinian countryside. While she waits for her husband Marco (Guillermo Pfening) to join them, she is greeted by their neighbor Carola (Dolores Fonzi). They soon develop a mutual fascination, and the actresses have an intense chemistry that hovers over every one of their scenes. We learn that Amanda is a protective mother through their conversations, constantly calculating a “rescue distance.” For example, how quickly she could get to her daughter’s side if she were to fall into their pool accidentally. This is in contrast with Carola. Carola doesn’t care much for her son at all, even calling him a monster and warning Amanda to keep Nina away from him. We learn much more about Carola than we do Amanda, with an entire backstory being provided for her, which explains how David became so troubled.

Carola recounts the day when her life changed forever, and we are sucked into this retelling thanks to Fonzi’s emotion. She and her husband Omar (Germán Palacios) used to bread horses, their pride and joy being their prized stallion. That horse was the only thing keeping them afloat. But one day, both the stallion and David come into contact with poisoned water. There’s no hope for the horse, but there is for her son as Carola seeks the help of a mystic to help save him. Despite his recovery, he is no longer her David anymore, and we see it in Michinaux’s eyes at the very moment he changes, and it remains through Vodanovich’s performance as an older David.

“Fever Dream” is like waking up and trying to piece together the dream you just had. But no matter how vivid it was at the time, it quickly becomes a blur. A conversation between Amanda and David narrates the film. There’s an eeriness to it, but also confusion. Not sticking to a linear path, the narrative’s direction is dictated by what details David feels are important. He knows what Amanda should be focusing on, but the audience is in the dark. Having the story be driven by what a child wants to hear is like having them flip to their favorite part in a book, leaving out context.

Llosa does explore interesting themes throughout, however. Sticking to Schweblin’s inspiration, the film discusses a real poison that is harming Argentinian communities. “Very few children are born normal here,” one character says, and this is shown both in the novel and in the film through the depiction of many children with birth defects. This is caused by pesticides being used in farming, which in turn causes contamination to water sources. The poison that infects David, and eventually Nina as well, is linked to that, but it can also be metaphorical. The change in David is symbolic of the change that all children go through. The thread, or “rescue distance,” between mother and child is long and controlled, but as they grow older, it gets tighter and suffocating for the mother. Eventually, the thread snaps, and it must for them to grow into their own person. Children never stay the same for long, and the film shows how difficult it can be for mothers to adapt to their child’s evolving personality.

Llosa’s film functions well as a suspenseful, psychological drama, taking the audience on a journey whose conclusion is unclear. But when Amanda’s husband Marco finally makes an appearance, completely in the dark as to what just happen, we are no less confused.