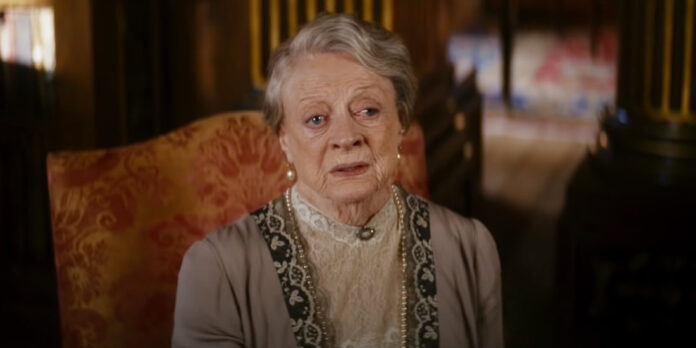 THE STORY – The Crawley family goes on a grand journey to the South of France to uncover the mystery of the dowager countess’s newly inherited villa.

​​​​​There’s just something about seeing a shot of Highclere Castle with the sweeping “Downton Abbey” musical suite playing. For fans of the series, “Downton Abbey: A New Era” will feel like returning home to the beloved Crawleys. Once again written by Julian Fellowes, the television series creator and writer, this second feature film serves as a satisfactory and necessary follow-up to the 2019 film. Considering all that has happened in the world between the releases of both films, don’t worry if you don’t remember it; there’s a little recap feature before this movie plays.

Simon Curtis (“My Week With Marilyn”) replaces Michael Engler as the director for this second outing, perhaps because he was busy working on HBO’s “The Gilded Age.” Curtis previously worked on films like “Woman In Gold” and “Goodbye Christopher Robin,” making him a good pick for this sequel. His work fits the slightly more melancholy tone of the screenplay, which feels more like the series than the previous frothy film. It’s a series that was never afraid to kill off characters, take on the horrors of war, or approach complex topics such as sexual assault. Likewise, “Downton Abbey: A New Era” isn’t afraid to delve into deeper emotions, and Curtis proves himself capable of picking up the mantle of Downton and ushering in a new era for these characters and fans of the show.

The characters are a few years older – primarily noticeable with the children and the Dowager Countess (Maggie Smith) – and there have been some developments since we last saw these characters. The film opens with a wedding between Tom (Allen Leech) & Lucy Branson (Tuppence Middleton), Edith (Laura Carmichael) has decided to return to writing for her magazine, and Mary (Michelle Dockery) has continued to take the reins of the household. Her husband, Henry Talbot (Matthew Goode), is conspicuously absent (more so than in the last film), supposedly off traveling. But even the mere mention of Matthew and Sybil is sure to make diehard fans of the show happy.

Violet has inherited a villa in France and decides to give it to her granddaughter, Sybbie, to put her on a more even level playing field with her cousins regarding her wealth and status in this life. Robert (Hugh Bonneville) and the rest of the family are shocked by this generous gift, and Violet is purposefully coy about why an old friend of hers might have left it to her. The son of the benefactor (Jonathan Zaccaï) invites the family to visit the villa so that they can meet, despite his mother (Nathalie Baye) being opposed to it leaving the family. Much of the film revolves around the younger Crawleys trying to figure out what secret Violet is keeping about her youth that would result in such a gift.

Meanwhile, film producer and director Mr. Barber (a charming Hugh Dancy) contacts the Crawleys because he would like to shoot a silent film on location at Downton Abbey. While Robert and Carson (Jim Carter) are opposed to it, Mary and Edith are excited by the prospect that the money will allow them to fix Downton’s leaking roof and give many the chance to brush shoulders with some glamorous Hollywood individuals. So while half of the family departs for France, the film crew and actors move into the house to make a silent film called “The Gambler.” Violet supports the plan’s practicality but retorts, “I’d rather eat pebbles,” when asked if she’d like to watch more of the filming. Smith might be older, but she’s just as feisty and quippy as she was in season one of this enduring show.

There’s something very meta about the Crawleys allowing a film to be made at Downton and the conversations around its pros and cons. The show, and both films, have been made at the actual Highclere Castle, and presumably, similar conversations occurred when it first served as a film set. In fact, the first film made at Highclere was “The Missionary” in 1982, which ironically also starred Maggie Smith. There’s humor to be found in a film being made at Highclere Castle about a film being made at Downton Abbey as the Crawleys, and their excited servants experience filmmaking up close for the first time ever when it’s going through such a significant change in its own history from silents to talkies.

For fans of early movies, this is sure to be a treat as it allows a glimpse into the making of a silent film and all of the film equipment used. Lead actors Guy Dexter (Dominic West) and Myrna Dalgleish (Laura Haddock) are nervous about the rising popularity of new “talking” films, particularly Myrna, whose accent is not translating well onscreen, forcing Mary to surprisingly step in and record her own voice for the film’s soundtrack. Anna (Joanne Froggatt) and Daisy (Sophie McShera) may be disappointed to find out that Myrna’s personality doesn’t live up to their high expectations for her. Still, Haddock’s performance is anything but as she imbues Myrna with layers of complexity in such minimal screentime.

The film does an excellent job balancing plotlines and giving every character something to do in its 125-minute runtime, from footman Andy (Michael Fox) to Isobel (Penelope Wilton). Smith, Bonneville, and Dockery each offer moving performances, and West, Haddock, and Dancy are charming additions to the cast who only serve to elevate a formula that already works. It’s also great to see later characters like Bertie (Harry Hadden-Patton) and Maud (Imelda Staunton) return to Downton, adding more flavor to the already sprawling cast.

The film is as elegantly put together as the show consistently was, from the gorgeous scenery to the beautifully sweeping score. The costumes are enjoyable as the Crawleys move towards the 1930s, allowing for different silhouettes than the series started with. Much of the film switches back and forth between the bright whites and blues of the coast of France and the warmer tones of Downton, creating a pleasant contrast in the film’s look.

As much as the film is delightful and fun, it eventually delves into more weighty topics as the plot progresses. Cora has a secret she’s keeping from her family, and Robert receives some shocking revelations that make him question his place in the world. Mary is presented with new opportunities and challenges that make her question her ability to lead Downton into the future. And our favorite footman-turned-butler, Thomas Barrow (Robert James-Collier), gets another chance at romance from an unexpected person, despite how difficult it is for him to live such a life during this time period.

“Downton Abbey: A New Era” is a beautiful continuation of the series and continues to bring the Crawleys into the modern era. It has much less to offer to those who didn’t watch the series but is so charming that it might be worth seeing anyway. For those who love the show, this will be an emotional viewing experience. Seeing old bonds like the friendship between Violet and Isobel and the truly-evolved sisterhood between Mary and Edith culminate here is heartwarming and gives “A New Era” a purpose for existing outside of the typical senseless cash grab. It could have been another light piece about the Crawleys, like the first film, which felt more like a long special episode. But this story advances the characters, portraying a houseful of people above and below the stairs, continuing to adjust as their way of life disappears. The continued presence of Tom Branson (Allen Leech) in the family reminds us that the Crawleys are not your average upper-class landed British family, as do the staff and Mary’s quiet acceptance of and support for Barrow’s sexuality. Is “Downton Abbey” perhaps an idyllic depiction of a manor house like Highclere Castle in the late 1920s? Yes, but that doesn’t make “Downton Abbey: A New Era” any less enjoyable or keep it from making the audience misty-eyed.