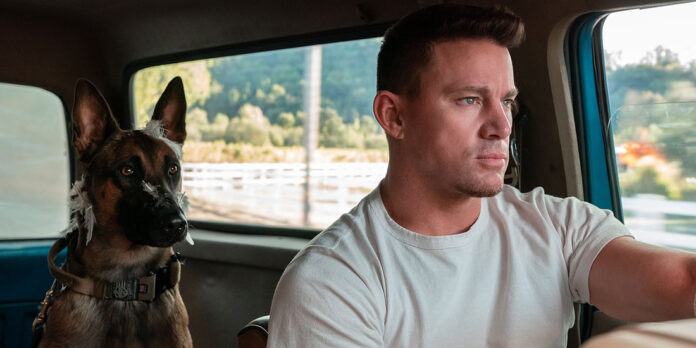 THE STORY – With a dog named Lulu by his side, Army Ranger Briggs races down the Pacific Coast to make it to a soldier’s funeral on time. Along the way, Briggs and Lulu drive each other completely crazy, break a handful of laws, narrowly evade death, and learn to let down their guards to have a fighting chance of finding happiness.

​​​​​​​​​​There’s an old showbiz adage that advises performers to never work with children and animals. The reason is that both children and animals can be challenging to work with and then steal all the attention for the tiniest thing in a performance. Thankfully for “Dog,” Channing Tatum is essentially a human puppy, so the fact that he can so easily steal scenes back from the three dogs who play the titular character doesn’t come as such a surprise. What does come as a surprise, though, is that “Dog” is Tatum’s debut as a director, working with his long-time producing partner Reid Carolin, and it is that rarest of things: A mid-budget adult drama released by a major studio that actually works, despite its reliance on formula, due to how deeply felt it is on the part of everyone involved.

Tatum plays Jackson Briggs, a former Army Ranger who is trying to get back to some form of active duty after a traumatic head injury. When he gets word that fellow former Army Ranger and friend Riley Rodriguez has died, Briggs meets up with his former battalion to mourn and try to get his former Commanding Officer to approve him to return to duty. That approval will only be given if he completes one mission: Drive Rodriguez’s war hero dog Lulu, currently suffering from anxiety herself, from Washington state to the family funeral in Arizona. Misadventures and mutual healing ensue.

“Dog” doesn’t do a single thing you haven’t seen before in countless buddy road trip comedies, except that now one of the buddies in question is a dog. A very adorable dog. It’s a sturdy enough formula that this is practically all the film needs to hold our interest, but Carolin’s screenplay (based on a story by himself and Brett Rodriguez) makes the wise choice to keep Jackson’s backstory mostly a mystery, something that we slowly uncover throughout the film as he begins to take steps to address his mental health. Having first met while filming Kimberly Pierce’s underrated “Stop-Loss,” it’s unsurprising that Carolin and Tatum would want to tell a story about a soldier dealing with PTSD, and “Dog” keeps that storyline simmering in the background while focusing on Lulu and Jackson’s relationship with her. As usually happens in these types of stories, Jackson goes from seeing Lulu as an obstacle to overcome to genuinely caring for her, and Tatum charts that journey effortlessly. It’s easy to focus on Lulu when she’s such a lovable character (even when she’s tearing up the inside of Jackson’s prized ’84 Bronco). Still, the film’s emphasis on the relationship between humans and dogs allows the story about Jackson’s PTSD to feel completely unforced. When the time comes to focus on this part of the story, finally, Tatum is lovably vulnerable.

That vulnerability is as key to Tatum’s star persona as his affable himbo-ism, and it’s put to beautiful use here, as Jackson’s growing affection for Lulu lets more and more of it peek through until it all comes out and he doesn’t quite know what to do with it. That “Dog” is as much about a man learning to be vulnerable and open to help from others as it is about a man, and a dog learning to care for each other is a pleasant surprise. The whole film is a nice surprise, with a well-paced running time and some lovely shots from cinematographer Newton Thomas Sigel. The supporting cast is also fun, with Jane Adams and Kevin Nash as a hilarious marijuana-growing odd couple, Bill Burr as an antagonistic cop/former Military Policeman, and Ethan Suplee as another former military man rehabilitating a former military dog. Each performer brings their own unique flair to their roles, imbuing them with such deep feelings that they don’t ever feel like stock characters but fully-rounded human beings. That feeling, which runs throughout the whole film, is what ultimately makes “Dog” worth seeing. For all its obviousness and refusal to go too deep, the filmmaking and performances are so full of warmth that, much like a dog trying to get some pets when they know they’ve just done something bad, you’ll end up giving in and loving it almost in spite of yourself. It turns out sharing the screen with a dog isn’t such a bad idea after all.