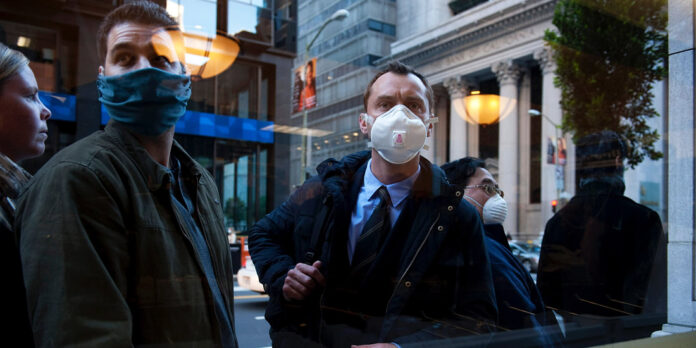 THE STORY – A mysterious virus rapidly spreads throughout the world, bringing fear and panic in addition to illness. An ensemble of scientists, reporters, and government officials do their best to control the pandemic in the face of the rapid breakdown of social order.​

​​​When it opened in the fall of 2011, Steven Soderbergh’s “Contagion” received a warm reception from critics and decent numbers at the box office. However, it was by no means a sensation. Its awards trajectory was non-existent and subsequently, it had seemingly disappeared from public consciousness. Now, with the pandemic we are currently facing, it’s experiencing a somewhat unsurprising revival of interest. At the time of writing, it’s currently sitting at number three on the iTunes chart of top downloaded movies, and it occupies the highest position on the “Popular This Week” section on the home page of Letterboxd. In the face of its resurgence of popularity, let’s explore “Contagion”.

To all of us in 2020, the story of “Contagion” will be unfortunately recognizable. A mysterious virus spreads rapidly throughout the globe, killing a frightening amount of those with whom it comes into contact. The film follows an ensemble of characters made up of scientists, reporters, government officials, and ordinary people as they struggle through the effects of a global pandemic. Fear and disorder quickly set in and the civilized world begins to tear itself apart. It’s up to a brave team of scientists to develop a vaccine – no matter the cost.

While this may seem like the set up for a gripping globe-trotting adventure, Scott Z. Burns’ tight screenplay smartly eschews the trappings of a typical Hollywood thriller in favor of methodical, realistic scenes and science-based dialogue. The film’s greatest accomplishment is that it features no screaming monologues or elevated dramatics; characters express doubt, disbelief, and eventually fear in a way that we can now recognize as prophetically realistic. The screenplay doesn’t make a show of its own existence, which helps to make this film as effective and frightening as possible.

The cast in charge of telling this story is a more-than-capable collection of Hollywood stars and reliable character actors. Of the most recognizable faces, Kate Winslet’s performance as an epidemic specialist stands out the most. She appropriately sells the frustration her character feels when her scariest predictions aren’t met with the correct level of response, and the fear she faces when what she foresaw begins to come true. Laurence Fishburne and Gwyneth Paltrow also deliver grounded and memorable performances. The greatest performance in the film, however, comes from Jennifer Ehle. While generally more acclaimed as a stage performer, Ehle shines as a CDC research scientist. She brings a professional air to her character that leads the audience to inherently trust her, which comes in handy when we see the decisions her character must make as the film goes on. Unfortunately, the ensemble-based nature of the storytelling means that some of the characters’ plotlines will be naturally less engaging than others. This is the sad fate of Jude Law’s storyline, wherein he plays a frustratingly paranoid blogger with suspicious motives for his investigations. But because the film is directed and edited with a dynamic pace, our visits with these characters are brief.

Soderbergh’s aforementioned direction provides clarity and specificity to this expansive story. He’s particularly good at giving weight to the smallest of interactions which we will later learn to be of utmost importance (an early montage shows just how many different people can come into contact with the same contaminated object, helping to spread the virus). These visual moments are not obvious, and his light touch serves to show how little most of us truly think about what we touch and who we become accidentally connected to via contact. He also makes dynamic use of color to quickly indicate where a scene takes place, a technique he used to similar effect in “Traffic”.

If you’re looking for a fictionalized version of what our world is now facing, “Contagion” is a thrilling and tense look into the causes and effects of a global virus. It may not necessarily provide you with a distraction from current events, but it will show you how serious a pandemic threat can be and how important appropriate responses are in helping to bring an end to its spread.