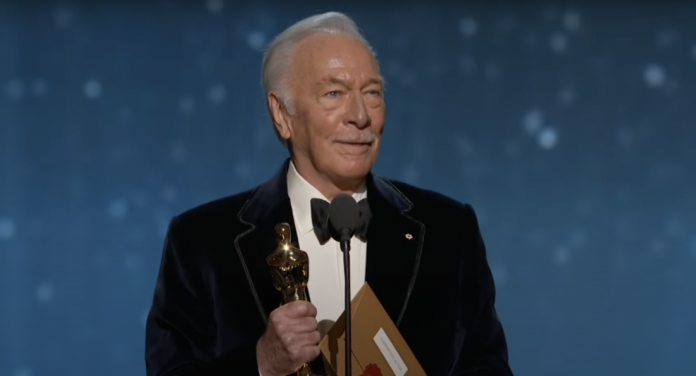 Over the last ten days following the death of actor Christopher Plummer, there have been numerous tributes published from film historians and critics and friends and co-stars alike. What I would like to offer is a tribute from a very different perspective — from that of a movie fan, or, more specifically, a Christopher Plummer fan.

Like most of us, I first saw Plummer blowing that whistle and tearing up that Nazi flag as Captain Georg von Trapp in the 1965 film “The Sound of Music.” Being a kid, my initial reaction to Capt. Von Trapp was, “Who is that mean man and why is he being so awful to that nice Maria?” Some years later, I saw the film again. This time, I began to watch Plummer more closely. I appreciated just how layered his performance was, planting unexpected seeds of empathy along the way so that his final transformation into a hero is fully earned.

It was, I think, that clear intelligence in Plummer’s performances that first made me appreciate his work. (That, plus an air of impossible self-confidence that convinced me that this guy knew what he was doing.) Perhaps that skill came from his stage training, or more specifically, his performances in Shakespeare, who created characters who offered great actors the opportunity to burrow deep into their roles and display layers of meaning to them that other actors can never see. Plummer was one of those great actors, whether on stage or in film, that allowed his intelligent talent to reveal character.

Granted, his film characters’ smarts were clearly evident in such overly intellectual roles as that Rudyard Kipling in John Huston’s “The Man Who Would Be King” or Sherlock Holmes in “Murder By Decree” alongside another smart actor, James Mason. Yet Plummer brought that intelligence, perhaps even more so, to his gallery of sly, clever villains, such as the predatory music mogul in “Inside Daisy Clover” or as Christopher Reeve’s romantic rival in “Somewhere in Time.”

​Though known for many of his classical roles, Plummer also thrived in genre work, bringing that same ability to a wide gallery of characters, best exemplified by his Enron-like bank mogul in Spike Lee’s “Inside Man,” his haughty mystery novelist in “Knives Out” and his memorable work in “Star Trek VI: The Undiscovered Country” as one-eyed General Chang, one of the most fearsome villains in the series’ history. And Plummer was not afraid even of embracing schlock now and then. I still chuckle when I recall his nutso televangelist Rev. Jonathan Whirley, the secret leader of a cult called PAGAN (People Against Goodness And Normalcy) in the Hanks/Aykroyd starrer “Dragnet” (1987). Wonderfully ridiculous work.

Of course, much has been written about Plummer’s late-career renaissance, beginning with his first Oscar nomination at age 80 for “The Last Station,” his Oscar-winning work as a late-blooming gay man in Mike Mills’ “Beginners” and his yeoman work single-handedly saving Ridley Scott’s “All the Money in the World” resulting in his third Oscar nomination.

But to my mind, Plummer’s greatest screen performance, also in his later years, was as Mike Wallace in Michael Mann’s “The Insider,” which focused on the famed “60 Minutes” expose of the tobacco industry. The real Wallace, who reported the story on the show, famously hated “The Insider” and Plummer’s take on him, which is why, you might suspect, the actor’s performance is so impressive. His Wallace is not the muckraking journalist we had come to know but is instead a bit of an opportunist who fights (and wins) the easy battle but thinks twice about his public image when the more challenging ones come along. Plummer looks or sounds nothing like Wallace, but in his hands, we still see what makes this newsman tick, just how bright his character is and ironically how that intelligence finally trips him up.

Plummer’s passing has brought an appreciation of condolences from any number of writers, but, I suspect, it will be movie fans who will miss him most of all.

What was your favorite performance by Christopher Plummer? Let us know your thoughts in the comments section below or on our Twitter account.