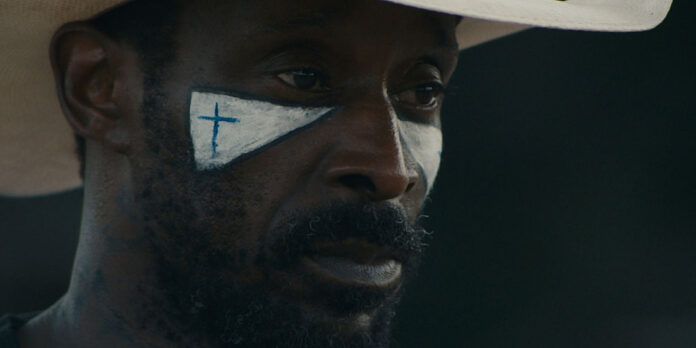 THE STORY – In a near-abandoned subdivision west of Houston, a wayward teen runs headlong into her equally willful and unforgiving neighbor, an aging bullfighter who’s seen his best days in the arena; it’s a collision that will change them both.

A film about an unlikely bond between an aging ex-bull rider and a borderline delinquent teen sounds like it could be overly sentimental and ingenuine. But Annie Silverstein’s “Bull” is certainly neither of those things. What it lacks in focus and narrative drive, it makes up for in authenticity and grittiness. It’s an impressive feature debut for Silverstein and an even more impressive first performance from young newcomer Amber Havard as Kris. She’s the perfect foil to Rob Morgan’s wearied Abe. “Bull” screened at the 2019 Cannes Film Festival and the Deauville Film Festival where it won the Grand Jury Prize. The film’s understated script was written by Silverstein and her husband and writing partner Johnny McAllister.

Kris is a 14-year-old helping take care of her younger sister and her grandmother while her mother is in prison (her father isn’t in the picture). She’s a “trouble child” who’s gotten into trouble at school for getting into fights and who has a brush with the law after breaking into her neighbor’s house to throw a party and raid his hefty alcohol collection. The middle-aged ex-bull rider, Abe, agrees to not press charges if she will help him with cleaning up the mess she and her friends made and other chores around his house.

It has gritty realism and much of the film is quite dark, aside from the bull riding scenes. The rodeo parts of the film are brighter and more vibrant. However, they do employ overuse of hand-held cameras that’s common in recent films. The production design, aside from the rodeo scenes, is faded and muted helping to create a bleak and monotonous atmosphere. This sense of realism is heightened by the fact that Silverstein cast non-professional actors, including Sara Allbright who’s fantastic as Kris’s mother.

Havard flits between defiant and reserved as Kris, who must look after her younger sister while also trying to find her own way. She’s a young girl mixed up with the wrong crowd, yet intrigued by the world she witnesses with Abe at the rodeos and curious if she could earn enough money to get herself out of her precarious position through bull riding herself. When Kris visits prison, a different side to her character is revealed as she has a warm and affectionate, if strained, relationship with her mother. Havard is particularly impressive in a tearful scene later in the film.

The film’s greatest asset is how carefully it crafts the connection between Kris and Abe. Their friendship is fragile and often awkward, rather than the warm and fuzzy relationship we often see in films like this. Rob Morgan doesn’t get the material here that he did in last year’s “Just Mercy” (in which he gave an astounding performance), but he’s good as the wearied and often injured Abe who’s just scraping by and struggling to imagine a life for himself beyond bull riding.

For a film called “Bull,” it doesn’t delve very far into the issues of bull riding and rodeos. Abe is frequently injured and it doesn’t seem to overly glamourize the sport, but the film is less interested in bull riding than in Abe and Kris’s lives. It’s certainly not a feel-good film. By the end, there’s little resolution or reassurance that Kris will ever succeed in escaping the delinquency that claimed her mother – but there’s hope.

“Bull” is similar in some ways to last year’s “Little Woods” by Nia DaCosta, which also painted a picture of a bleak existence and a cycle of poverty, drug use, and bad relationships that are difficult to escape. The film has some pacing issues and its non-ending could annoy some viewers. It’s certainly at its best when its two leads are together. Though imperfect, “Bull” is a solid debut for Silverstein as a features director and Havard as a young actress. ​