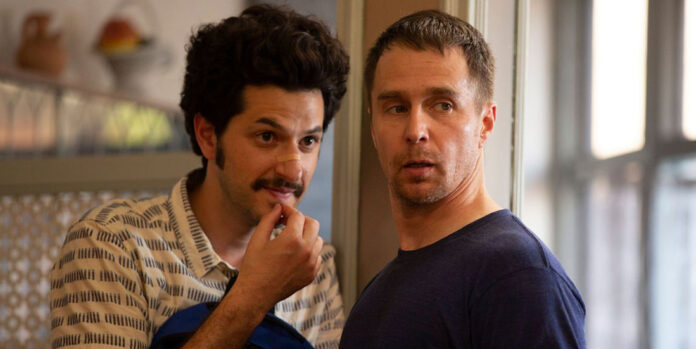 THE STORY – Ex-jailbirds Eddie and Paul are on parole and working in a New York diner, and their lives seem to be at a dead end. Then, English lawyer Katherine Rookwood walks into the diner with an offer they can’t refuse.

​​When something is monotonous, you’d normally assume that something to be slow, tedious, and boring. However, what happens when something moves so impetuously that you’re bored purely due to an inability to fully comprehend what’s in front of you? You get Haidi Haijaig’s “Blue Iguana,” and the loss of 107 minutes of your time that will never be recovered. In an attempt to replicate the fun and frothy caper comedies of previous decades, Haijaig flounders around with “Blue Iguana” in a lackluster manner similar to a magician incorrectly using misdirection as a way to trick his audience into believing the magic is real. With “Blue Iguana,” the magic is anything but.

We open with Eddie (Sam Rockwell) and Paul (Ben Schwartz), fresh out of jail and working in a seedy diner at the behest of their parole officer. However, we barely have time to get any further detail about this before a posh London lawyer, Katherine (Phoebe Fox) waltzes in the diner, obnoxiously eats a hot dog, and before we know it, the two meatheads are off to commit a crime across the ocean for $20,000. They fail their mission, resulting in the most shocking scene in the film, which inconveniently happens within the first seven minutes. Eddie, Paul, and Katherine then regroup and decide to go after the legendary Blue Iguana diamond in an attempt to salvage the mess they’ve got themselves into. Unbeknownst to the trio, they aren’t the only ones in search of mythic riches.

“Blue Iguana” is stale. From the opening scene, which speeds through exposition so quickly that the audience isn’t even able to develop a connection to the characters before we’re thrust into the thick of the plot, it’s obvious that this film is a deadbeat failure. We aren’t even told what’s in the original satchel they’re supposed to steal in London; instead, the first battle royale is merely a means to introduce the actual storyline of the Blue Iguana diamond. In other words, the first quarter of the film is literally worthless. After we begin the actual journey to retrieve the Blue Iguana, it becomes a pool of lackluster humor, failed slapstick, and forced dialogue which would be better suited muted than heard at all.

In terms of character, it’s an extremely disappointing break for Sam Rockwell, who’d only been going up since “Three Billboards Outside Ebbing, Missouri.” Though he does the best he can with what’s given to him, it’s clear that the director truly wanted both Eddie and Paul to be practically devoid of any dimensional traits at all, instead of creating two characters who are intentionally dumb and dumber. They’re confident with nothing to back it up except for an exposition that we never got a chance to learn about, and their attempts at goofy humor come across as a veiled plea for attention. If Haijaig meant to repulse audiences, then he’s done the trick with “Blue Iguana.” The unfortunate fact is, he didn’t mean to repulse us. He meant to entertain us, but the only entertaining thing about this film is the end credits.

In fact, the only glimmer of hope in this film comes from Phoebe Fox’s Katherine, whose story of the promising lawyer now in debt to the mafia is the only enthralling information “Blue Iguana” presents. She elevates Rockwell’s otherwise brutish Eddie in a far-flung but excruciatingly-needed romance. The charisma shared between the two (usually over food), is truly the sole source of enjoyment this film will provide.

Powered by JustWatch
Share
Facebook
Twitter
Copy URL
Previous article
The Next Best Picture Podcast: Episode 105 – Phase One Of The Oscar Season Is About To Begin & The Trailer For “Outlaw King”
Next article
“OPERATION FINALE”