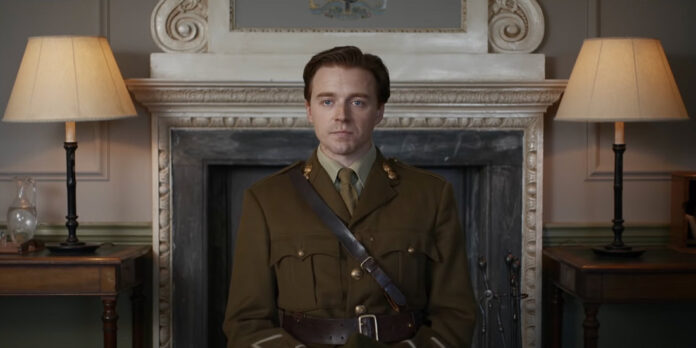 THE STORY – Decorated for bravery during World War I, British soldier Siegfried Sassoon returns from service and becomes a vocal critic of the government’s continuation of the war. Adored by the aristocracy and the stars of London’s literary and stage world, Sassoon’s experiences inspire him to write poetry about the horrors of battle.

​Examining the life of an artist can be quite a fruitful endeavor to pursue. It is a perspective that can encapsulate a complex world, one in which the interpretation of significant occurrences lends an aura of intrigue to be discussed. One’s artistry is often a reflective act back onto the themes of current society, and there is a captivating journey to see that evolution. Perhaps this is one of the reasons why storytellers seem to be inherently drawn to such figures in history. “Benediction” would appear on the surface to be merely another familiar dive into the true events concerning a well-known writer. However, the results are an endearing ode to lost souls in the fallout of personal catastrophe, and the film is quite a notable work.

Jack Lowden stars as Sigfried Sassoon; a soldier deployed in the first World War who soon ruffles feathers with his outspoken protests against the conflict. His friends in high places move him into a mental facility in an effort to avoid getting court-martialed, and here is when he begins his writing of poetry. Eventually, once the war has ended, Sassoon’s career as an author flourishes with great success. Yet even with all his newfound achievements, there is still a darkness that haunts Sassoon. He must continue to live a closeted life that only poisons his tumultuous relationships, particularly with headstrong performer Ivor Novello (Jeremy Irvine). An older Sassoon (Peter Capaldi), unhappily married and indifferent to his family, reflects on the highs and lows of his life to reconcile the beauty and misfortune within.

Terence Davies has a filmography spanning decades at this point, and one can certainly get a sense of tradition in the way he spins this narrative. There is a straightforward nature to the filmmaking that never impedes too much on the overall setting. He does display some crisp framing that appropriately echoes the poetic subject matter, but overall his directorial hand is subtle and unassuming. The sheen of the cinematography doesn’t always craft an appropriate sense of time, and the interludes of Sassoon’s poetry being read against the backdrop of corresponding stock footage varies in its effectiveness. It’s these moments where the pacing can feel more tedious, and the momentum that propels one forward becomes inconsistent. The direction is stately and competent, though not particularly extraordinary.

At the same time, Davies’s screenplay provides a plethora of joyous enthusiasm that is instantly infectious. The lyricism of poetry is infused within the text, as the dialogue is pithy and elegant with every exchange. There is excellent humor mined as the quips traded between dueling intellectuals of the early 20th-century gay scene are uproariously biting and sharply delivered. Still, there is also an earnest exploration into how one man’s artistry is used to express a tormented emotional state. The piece is a commentary on a world built around loss and isolation, despite all the personal connections that still feel tenuous in their longevity. Glee and elation can quickly turn toxic, and bitter rejection evolves into a profound resentment of the demons that never dissipate. The story Davies creates is one that uplifts with good spirits while also recognizing the trauma that is carried daily. There is no wallowing in misery but instead a fascinating discussion that is expertly realized in this material.

Lowden has been giving reliable performances for the past few years now, but this is without a doubt his finest hour. He carries a somber and steely exterior that acts as a thin veil that shrouds his vulnerable core. He also deftly trades the witticisms in a graceful manner while also showcasing the internalized anguish that had to fester in silence like so many had to endure. The final scenes are when the true catharsis is reached, and he provides one of the most powerful sequences that leave a lasting impression. He gives an exceptional performance that is surrounded by a terrific supporting ensemble. Irvine admittedly is a bit stiff in his scenes, but his presence is enhanced by the flowery dialogue, which he handles ably. Capaldi embodies a scornful weariness that is authentic and compelling. Perhaps the most significant asset amongst the group is Calam Lynch as another confidant of Sassoon, who bursts with flamboyant delight grappling with deep sorrow and rage. It’s a commanding turn that charms and devastates in equal measure. More minor roles filled by the likes of Simon Russell Beale, Julian Sands, and Ben Daniels are also engrossing in their brief portrayals.

It’s been well-documented that much of Davies’s work is cast through the lens of autobiography, and “Benediction” is strangely of a similar fabric. While the environment may not be an exact replica of his previously seen youthful exploits, much of the same themes are present nonetheless. There is still a personal journey that navigates through a distressing time, wrestling with the stages of pure content that easily slip into mourning a life unfulfilled. It’s a peculiar spirituality, also taken literally within the text, that provides such a rich observation of quiet passion. Davies’s script may emphasize this more than his direction, but he still manages to present a beautiful love story. It is a love of others and oneself and the difficulty to maintain that under duress. With remarkable performances abound, the film is a layered descent into an imaginative mind that comments on the horrors and jubilation life can provide. The work of a poet is a sublime framework for such a successful enterprise.