Before Dior, There Was Woodcock 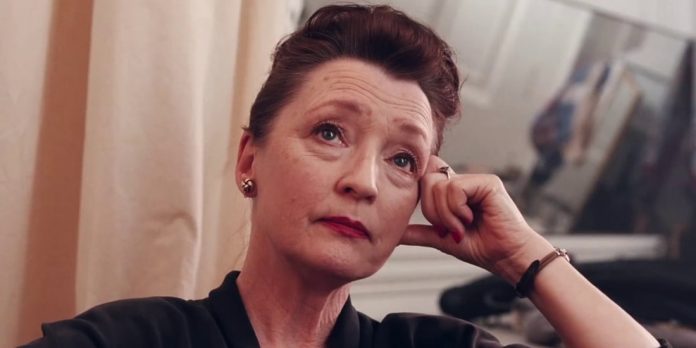 By Nadia Dalimonte
​
Lesley Manville is really cornering the market of period films set in the world of haute couture dressmaking. In Anthony Fabian’s cheery comedy, “Mrs. Harris Goes To Paris,” Manville headlines a fairytale ‘Cinderella meets Paddington’ story that whisks her to the House of Dior in search of something special. The magnificent actor plays Ada Harris, a housecleaner in 1950s London who falls in love with a client’s Dior dress. The sparkle of the fabric awakens in her a fantastical dream: to buy a Dior dress of her own. With a no-nonsense attitude and a kind heart, Mrs. Harris goes on a life-changing adventure to Paris. The story, based on Paul Gallico’s 1958 novel, “Mrs. ‘Arris Goes to Paris,” is made more wholesome by Manville’s magical performance. She delights in spectacular fashion, recalling another couture-focused period piece.

“Mrs. Harris Goes To Paris” is not Manville’s first invitation into a glamorous showroom. She had a front-row seat to the House of Woodcock in Paul Thomas Anderson’s “Phantom Thread,” for which she received her (long-overdue) first Oscar nomination in 2018. Anderson’s 1950s London-based drama, a haunting and at times humorous love story, harbors a compelling Manville character. Unlike Mrs. Harris, Manville’s Cyril Woodcock is a force to be reckoned with – just operating on another model of politeness. Pick a fight with either of them, and they will both make you regret it, one through sheer kindness and the other with a poised, sharp edge. A double feature of both films comes highly recommended — not just to cherish a new Manville performance in “Mrs. Harris Goes To Paris,” but to appreciate the actor’s range playing a character far more difficult to decipher in “Phantom Thread.” Cyril is the ace up the film’s sleeve. She manages the fashion House and casts a quiet spell over all who step foot inside.

House Of Woodcock
From the moment Manville first appears on screen in “Phantom Thread,” she shows you how much power her character holds. While opening up shop, she walks toward the front entrance and stares directly into the camera, giving the kind of close-up you would find in a Jonathan Demme film. Cyril keeps order in the House of Woodcock for her fussy, man-child brother Reynolds (played by Daniel Day-Lewis), a renowned dressmaker at the center of British fashion, attracting heiresses and royalty alike. To be dressed by Woodcock is an honor taken seriously by everyone, Reynolds especially. His time and energy are engulfed by work, leaving no room for anything outside of a routine. Women come and go, becoming ghosts of his past. In an early scene of Reynolds and Cyril having morning tea, they are joined by a woman asking where Reynolds has gone. Nothing could be said or done to bring him back to earth. The camera immediately cuts to Cyril’s reaction shot, establishing her perceptive presence as one not to be ignored. Manville gives a look of understanding, both to the woman’s concern and of Reynolds’ character. As Cyril remarks to him afterward, “She’s lovely, but the time has come,” which calls into question how long the House can run without new blood. The film is full of moments such as this one — Cyril pierces through people. Comfortable in silence, she does more reacting than she has dialogue. She maintains an unspoken language between herself and Reynolds, housed by the fashion establishment they built together and made more exclusive when a new presence enters into frame.

The film focuses on the relationship between Reynolds and his headstrong new muse Alma (played by Vicky Krieps). The pair do a compelling dance of personal survival within the walls of their strange relationship, each wanting their own corner of the room. Reynolds is a seemingly eternal bachelor until he meets Alma, who unexpectedly turns his precisely tailored life upside down. His history of turning women into ghosts of the past is forever altered by Alma’s endurance, strong will, and some poisonous mushrooms. In retrospect, it is hard to imagine Alma reaching as close to Reynolds’ interior world without the presence of his sister. Cyril pulls all the strings for his creative process to run smoothly. Not only as a form of fierce protection but also because she knows what works best for him. The film makes his routine clear; when he’s in it, it is best left unshaken. The mystery of why unravels meticulously through every subtle change in Cyril’s expressions. She is the window showing Alma what can and cannot be done. The possibility that Reynolds can even be tamed creaks open the door for Alma to get to know him patiently – in her own way. Much of Anderson’s story explores how Alma’s presence affects Reynolds, from “loudly” buttering toast to nursing him as a maternal figure. But the ripple effect on Cyril is not to be overlooked, nor is the precise detail Manville brings to the character’s unfolding.

Cyril’s Presence
Cyril is a poised, emotionally compressed woman. Unambiguous as she may be, it is a challenge to figure out what makes her tick. The gift Manville brings to this character is that of presence. Cyril’s spirit fills the house, even when she is not physically there. During corridor shots of Alma and Reynolds filmed from afar, you get the feeling that Cyril is nearby, just outside of the frame. When she is on screen, every minute is precious. Manville walks a tightrope between her character being present in a moment and someplace else in her head, calculating how best to react to others. There are many examples of this in the film, but none are better than when Cyril is seated for breakfast. Breakfast in the House of Woodcock is Reynolds’ quiet time, not to be misused. This is also the most interesting time of day to really observe Cyril; consider just how much she conveys over the course of three key breakfast scenes scattered in the film.

Cyril’s first breakfast with Alma and Reynolds feels like a test; she remains quiet the entire time until Reynolds departs in a huff from Alma, making too much noise. Cyril takes the opportunity to teach the importance of silence, a lesson she herself then contradicts in the second breakfast scene. There is a moment when Alma warmly looks over at Cyril longer than usual as if encouraging empathy. The exchange clearly startles something in Cyril; you can see her wrestling inside before breaking the silence with a “distracting” question to Reynolds and a scathing counterpoint to justify interrupting him. By the third breakfast scene, Cyril has become very fond of Alma at this point in the story. This revelation feels like a quiet bombshell, given how much of the film plays on the expectation of both women perhaps being turned against each other. Cyril presses Reynolds in the scene, telling him not to make Alma sit around waiting. The moment builds to some of Manville’s most blistering lines in the film — “I’ll go right through you, and it’d be you who ends up on the floor, understood?” — all before taking a sip of her morning tea. In each of the breakfast scenes, the actors are playing a game with their emotions, and Manville moves up a level each time. The fonder Cyril becomes of Alma’s non-conformity, the more Cyril pushes Reynolds’ buttons.

Reynolds stitches hidden messages into the linings of his dresses. Carefully sewn secrets are left untold – unless one knows where to look. There is power to be harnessed from harboring knowledge, whether to protect one’s self or others. Like moths to a flame, the central characters in “Phantom Thread” are drawn to what feels most powerful to them. A temperamental Reynolds needs all forms of interruption to be tamed for a carefully tailored life; a strong-willed Alma bucks the trends to carve something natural from all the pleasantries and formalities. In returning to the film, their relationship occupies just one room of the house. Cyril has her own space, carved perfectly so as not to let anyone inside. It is a testament to Manville that instead of just playing the notes of an icy demeanor, she brings powerful depth to Cyril and makes you question what emotions are running through her beyond appearances. Juxtaposed with the feel-good delight of “Mrs. Harris Goes To Paris,” Manville’s work in “Phantom Thread” shows thrilling versatility in the actor’s renowned career. The two films make for a great double feature to watch Manville approach a similar world from two different sides — one analyzing every move of a carefully controlled setting, the other trusting in the universe to sort everything out, like two bookends on the same shelf.

Have you seen “Mrs. Harris Goes To Paris” yet? If so, what do you think of it? What are your thoughts on Manville’s Oscar-nominated performance in “Phantom Thread?” Please let us know your thoughts in the comments section below or on our Twitter account.