“ARISTOTLE AND DANTE DISCOVER THE SECRETS OF THE UNIVERSE” 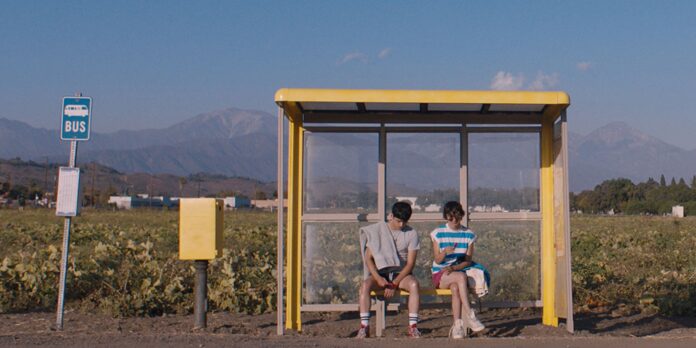 THE STORY – Based on the book by Benjamin Alire Sáenz, set in 1987 El Paso, it’s the tale of two teenage Mexican-American loners as they explore their friendship and the difficult road to self-discovery.

As human beings, we tend to be more comfortable in the light. The light is safe. We can see our surroundings and prepare for our escape if something goes wrong. There are fewer surprises in the light; fewer ways for us to get hurt than in the dark. The dark is the unknown – the dangerous. Anything could be hiding in the dark, and we fear for our safety without at least a little light to guide our way. But too often, that light – that safety that we crave – actually prevents us from seeing the full beauty of the stars that shine in the darkness. It’s called light pollution, a wonderful metaphor for pushing us to embrace the unknown and potentially dangerous. Doing so will allow us to open up and experience something truly beautiful.

In Aitch Alberto’s achingly beautiful teenage romance “Aristotle and Dante Discover the Secrets of the Universe,” our young heroes represent the dark and the light. Aristotle (Max Pelayo) believes the world is dark and unforgiving, a place where if you open up to people, it will only come back to bite you in the ass. He’s used to the darkness, but he wants to stay in the light. That’s part of what he likes about Dante (Reese Gonzales), who believes that the world is an exciting, beautiful place and that feelings are meant to be shared. He doesn’t want to live in the uncertainty of the dark. These two need each other in order to fully understand all the beauty and wonder that life has to offer. But it’s the summer of 1987 in El Paso, and the world isn’t exactly a friendly place for boys who are coming to realize that maybe they would rather kiss other boys than girls. Despite this, they realize that they’ve found an important person in each other, important enough that when Dante’s family has to move to Chicago for the school year, they keep in touch as pen pals. Or at least Dante does. Aristotle has too many issues expressing his feelings, which he may have inherited from his “inscrutable” father (Eugenio Derbez). When Dante returns after spilling his guts to Aristotle in letters, will their friendship ever be the same? Will they allow themselves the opportunity to head into the unknown dangers of the dark for the chance of getting something beautiful?

The sensitivity of Benjamin Alire Sáenz’s novel comes through in Alberto’s direction. The placement of characters in the frame is always meaningful. When the film widens out to take in more of the world surrounding Aristotle and Dante, Akis Konstantakopoulos’s cinematography shines. The film never calls too much attention to itself – Alberto never prioritizes style over substance – and the muted, even tone is reflective of the boys’ desire to be alone together. This is not a film that makes big gestures or takes big swings. It is instead a slice-of-life narrative that calls to mind many indie dramas, but none that told the story of two Mexican-American boys falling in love with each other.

There has been a lot of talk of late about the importance of representation in cinema. It is essential to see oneself reflected in media like movies and television – it gives legitimacy to one’s feelings and makes one feel less alone. While the importance of this film’s existence can’t be understated, it is all the more powerful for how it embodies the importance of seeing yourself in others. Gonzales and Pelayo’s pitch-perfect performances are best when they share the screen, dancing the wary adolescent dance of deciding just how much of yourself is safe to share with another person. Their odd-couple chemistry is incredibly endearing, with Gonzales’s wide-eyed openness the perfect foil for Pelayo’s pinched hardness. The more famous actors playing the boys’ parents also give perfectly-judged performances, providing just the right amount of unconditional support (Kevin Alejandro and Eva Longoria as Dante’s parents) and deep-seated worry (Derbez and Veronica Falcón as Aristotle’s parents) without tipping too far into syrupy saintliness. Derbez gives a particularly noteworthy, layered performance, striking a perfect balance between stoicism and tenderness.

“Aristotle and Dante Discover the Secrets of the Universe” has a magic to it. It is a completely unassuming film that will mean a lot to a great many young people who see themselves in its title characters. Just like Aristotle and Dante find themselves in each other, many people will find themselves in this film. The fact that Alberto’s screenplay treats all the boys’ feelings with equal, serious weight is a godsend. They don’t feel like characters; they feel heartbreakingly honest in all their imperfections and insecurities. May we get many more queer teen romances that treat the issues queer teens face with this much sensitivity and seriousness without tipping over into smug lecturing or wish-fulfillment fantasy.

"ARISTOTLE AND DANTE DISCOVER THE SECRETS OF THE UNIVERSE"<b>THE GOOD - </b>A sensitively directed, beautifully shot, and powerfully acted tale about people we don't see onscreen as often as we should.<br><br> <b>THE BAD - </b>While it's purposeful, what little style there is feels generic when this story is anything but.<br><br> <b>THE OSCAR PROSPECTS - </b>None<br><br> <b>THE FINAL SCORE - </b>8/10<br><br>