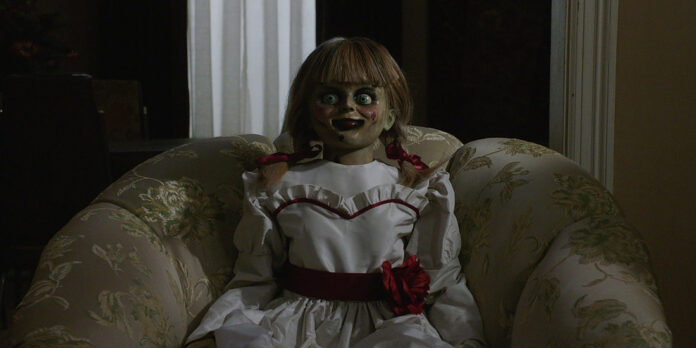 THE STORY – Determined to keep Annabelle from wreaking more havoc, paranormal investigators Ed and Lorraine Warren lock the possessed doll in the artifacts room in their house. But when the doll awakens the room’s evil spirits, it soon becomes an unholy night of terror for the couple’s 10-year-old daughter, her friends and their young baby sitter.

​​”The Conjuring” universe is one that myself and I’m sure plenty of others thought would not take off to the extent that it has. But over the past seven years, the franchise has seen a pretty decent amount of success. Solid box office numbers and decent critical success (specifically with “The Conjuring,” “The Conjuring 2” and “Annabelle Creation“), have warranted the creation of this somewhat shared universe. The most recent installment, “Annabelle Comes Home” is another solid entry into this franchise.

The scares are actually well done and approached much differently than not only the other Conjuring films but a lot of the modern horror films being made. The score is mortifying at times, heightening several of the films tense and more frightening moments. “Annabelle Comes Home” has only one real weakness and that is its screenplay. It is pretty bland. Filled with big moments of exposition and dialogue exchanges that don’t feel real or natural at all. Overall, this next entry in a never-ending series of movies is one that deserves a good amount of celebration.

Mary Ellen (Madison Iseman) has been hired by Ed and Loraine Warren (Patrick Wilson and Vera Farmiga) to babysit their daughter Judy Warren (Mckenna Grace) while Ed and Loraine go off on another ghost hunting expedition. Mary Ellen plans several fun things for Judy like baking her a cake for her upcoming birthday, playing board games, all the typical things a babysitter would do. Mary’s friend Daniela Rios (Katie Sarife) arrives at the Warren residence unannounced to hang out with Mary and Judy, or so she claims. Daniela actually shows up to see if the rumors about the Warren house and the Warren family are true. She stumbles upon the room filled with cursed objects and items only to find the Annabelle doll locked away inside its case. In an attempt to re-connect with her dead father, Daniela calls out to the spirits in the room awakening the Annabelle doll. Daniela opens the case and unknowingly sets free the demon that has latched itself to Annabelle along with all the spirits that are attached to the objects inside the room, setting off a domino effect of deadly and terrifying proportions making this babysitting job one to remember.

While the plot of the film feels rather long-winded, it is actually executed quite perfectly. The first act moves rather slowly and builds its tension at a crawling pace. Before the thick of the story actually starts to unfold, we get to see the spirits of certain objects slowly beginning to come to life and stalk our characters. There is little interaction between the humans and the spirits in the first and even the start of the second act. The film builds and builds, forcing us as an audience to watch these ghosts and demons stumble around in the background of the home simply toying with our main characters. You watch the film with your hands over your face, biting your tongue just impatiently waiting for an inevitable jump scare to happen and of course, it doesn’t.

While “The Conjuring” franchise films are typically known for completely adhering to the tropes of the supernatural genre with an emphasis on their jump scares, “Annabelle Coming Home” takes a bit of a different turn. They embrace some of the genre tropes and flip them on their head. This film will take expected horror moments three steps further to place the scare after we have forgotten that we’re in the middle of something we see all the time in the genre.

The placement of these moments are scattered throughout, making them quite the surprise whenever they do happen. They aren’t overused or even oversimplified. The film takes these typical moments and milks them dry until we are begging for something to just finally happen then just right when we’ve had enough, they strike. But the scares aren’t all just jump scares, in fact, a lot of them focus more on the atmospheric terror. The fear of not knowing where the actual spirit or demon is and us as an audience being just as clueless as the characters. Scanning each frame, hoping that we can figure it out before the actual scare so that we don’t get as frightened when the moment does arrive. Each moment of terror is handled with precision and patience making for quite the tense viewing experience. The score by Joseph Bishara, heightens these moments exponentially, adding more layers of depth to the fear this film emulates.

As stated before, the only real weakness that “Annabelle Comes Home” has is its screenplay. The plot is pretty basic, which is fine but there’s a lot of dialogue and interactions that are rather cringe-worthy and poorly crafted. There’s an entire subplot related to Mary liking a boy named Bob whose nickname is “Bob’s got balls” because he is the equipment manager for the high school basketball team. Everyone in the film refers to him by this name at some point including Patrick Wilson’s character which is really uncomfortable to watch. Nobody seems to have any real weight behind what they’re saying but the actors do what they can with the not so meaty script.

The performances from the three main actresses: Mckenna Grace, Madison Iseman, and Katie Sarife are pretty solid. While they don’t get a ton to work with in terms of dialogue, their performances rely on their physicality. Extreme close-ups on their faces and intimate moments of fear and worry finds them bringing their all to make this as convincing as possible. When the heat of the film starts to rise they all handle the situation a little differently, bringing some life to the characters so that the film isn’t just people running away from ghosts. There are real stakes and we feel compassion for them because we want to see them succeed in their lives.

“Annabelle Comes Home” is not the greatest horror film by any means and isn’t even the best in “The Conjuring” franchise but it does a pretty good job overall and is not a waste of time. The film handles its scares much differently than its predecessors which make for some truly hair raising moments and the three main actresses do a rather great job with the sloppy material that they’re given. All in all, it’s an enjoyable film with some moments that are actually genuinely spine chilling and is definitely worth another visit to the Warren residence.