“ANNA AND THE APOCALYPSE” 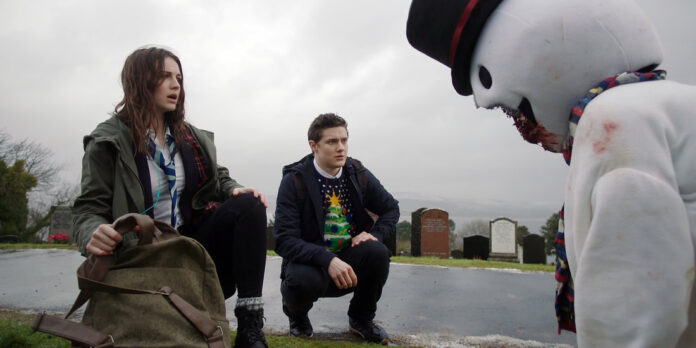 ​​​​​​​I love musicals. I love all of the gooey sentimentality and optimism which they contain. I love watching someone stare off into the distance and sing a song about their current state of mind, without a care in the world for their surroundings. When a man dances down the street with a suitcase in his hand, I sit up a little straighter in the theater. If you’ve come to this review under the impression that I was going to think this film was anything less than “fine,” you may want to steel yourself for some cheesy enthusiasm.

Now, pre-existing biases out of the way, I must admit that “Anna And The Apocalypse” is not the new “La La Land,” contrary to what a pull quote in the trailer posits. In fact, it’s a bit more like if “High School Musical” also had zombies, cursing, a cafeteria-dance-scene and all. I say that in the absolute best way possible, because “Anna And The Apocalypse” acknowledges the youth of its characters and revels in their saccharine positivity and naiveté.

The eponymous Anna is played by Ella Hunt, and she has an ever-changing cast of characters surrounding her as she moves through the plot, most notably Malcolm Cumming as her best friend John, the outcast played by Sarah Swire (with an astonishing set of pipes), and her father, played by Mark Benton. The title tells you exactly what to expect: this is Anna’s story, and the apocalypse is there too. Each character is given their own struggle and arc, and the film takes the time to invest the audience in the well-being of the people and their feelings, completely separate from whatever violence may occur later. The final act would not have the power that it does if it weren’t for this time taken at the top, and the combination of seriousness and absurdity accurately captures how your friendly neighborhood teenagers would handle the appearance of the undead.

The songs pass the universal test of all musicals: did you leave the theater humming any of the tunes? Not only was I humming all the way home, but I was also thinking to myself mid-film that I couldn’t wait to listen to these songs again. That is a bit symptomatic of a separate issue, being that not all of the songs actually advanced the plot. Many songs had that “The Greatest Showman” quality of being vaguely related to the storyline without actually requiring any context to understand, which I usually consider a fault, but these are just so catchy that I will give it a pass.

Finally, what you have all been itching to know…the zombies. How fun was the zombie action in the film? Musicals and action films each lend themselves well to large set pieces and an over-the-top tone, and the two marry beautifully in “Anna.” From a calm graveyard to a hectic Christmas tree store, each scene capitalized on the opportunities provided by the surroundings. I have to include a special shout out to the amazingly ridiculous (and ridiculously amazing) action song performed by Ben Wiggins which became the scene that won me over for the rest of the film. You would be hard-pressed to not enjoy all of the creativity and fake blood that went into each of these sequences.

This is my favorite genre of cinema. “Anna And The Apocalypse” is a creative spin on oft-tread tropes, dripping in sincerity and relishing every feeling it inspires, cynicism left at the door. It will not win any Oscars, and perhaps in a technical sense, it does not deserve to. However, it may remind you of the excitement a film can inspire. In an Oscar season filled with wonderful, dark, intense, and heavy films, “Anna And The Apocalypse” gives you permission to let some of that go. And for those of us who are intent on focusing on what is serious, “Anna” manages to catch your heart, no matter how intellectual a film-goer you may consider yourself.